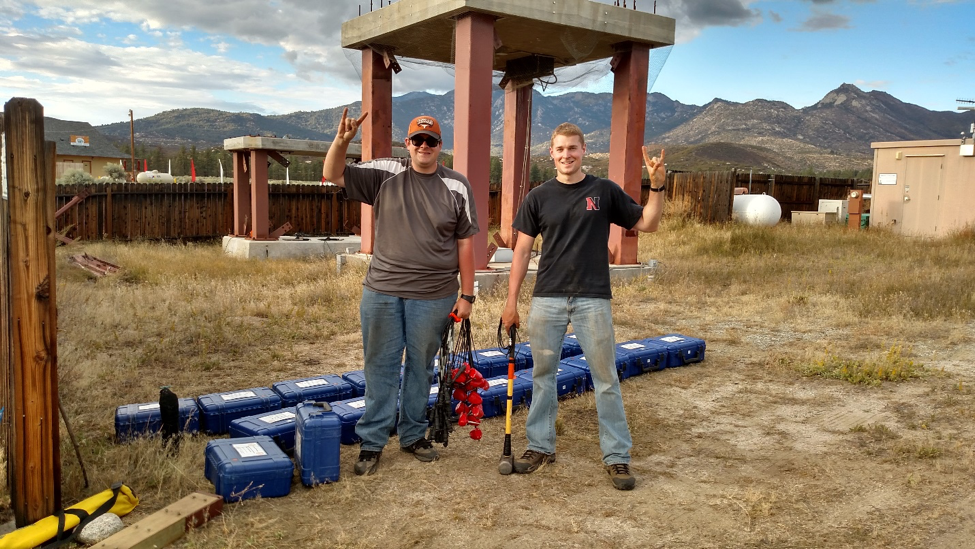 Brady Cox and his University of Texas, Austin, team are working to quantify uncertainty in shear wave velocity assessments.

In September of 2016, the group conducted field tests for Project CMMI-1261775, titled PECASE: Revolutionizing Surface Wave Methods for Engineering Analyses - from Deterministic and Incoherent to Probabilistic and Standardized (DIPS).

The goal of the study is to characterize the shearing stiffness of both near-surface (top several meters) and deep (down to several hundred meters) materials in the vicinity of existing surface and borehole accelerometers. These accelerometers have recorded numerous ground motions and can be used to compute how ground motions recorded within bedrock are amplified or attenuated by the overlying soils as they travel to the surface. With a robust characterization of the shearing stiffness profile down to bedrock, the frequency-dependent amplification or attenuation can also be predicted using seismic site response analyses and the results compared to the measured ground response.

This dataset will be used to establish a “site signature” for the GVDA site, which will allow for realistic quantification of shear wave velocity (Vs) uncertainty in seismic site response analyses.  It is hoped that more realistic estimates of Vs uncertainty will contribute to better comparisons between calculated and recorded site response at the GVDA.

“Traditionally, surface wave methods (SWM’s) have been used to provide a single, deterministic shear wave velocity (Vs) profile for each site tested, without consideration given to uncertainty,” Cox says. “However, as our profession moves toward probabilistic design and performance-based engineering, the inability to quantify uncertainty in Vs from SWM’s has been exposed as a major impediment to future progress.”

Cox’s DIPS plan is revolutionary in its aim to “smooth out the dips” in SWM’s, transforming them from deterministic and incoherent to probabilistic and standardized. The work aims to revolutionize SWM’s in two ways: (1) by quantifying uncertainty in Vs profiles derived from SWM’s such that suites of acceptable Vs profiles are provided with confidence-intervals on layer thickness and velocity — advancing from deterministic to probabilistic, and (2) developing standards for SWM’s applied to solving engineering problems — advancing from incoherent recommendations to coherent standards.

Cox’s team is in the process of analyzing the surface wave datasets collected at GVDA. Then, the suites of Vs profiles they develop will be used to perform site response analyses. “Our site response analyses, which contain realistic estimates of epistemic uncertainty and aleatory variability in Vs, will be compared with the recorded site response, which is currently poorly predicted using standard 1D site-response methods and existing borehole Vs profiles,” he says.

Cox’s work emphasizes the importance of accurate shear wave velocity profiles in earthquake hazard studies. All methods used to measure Vs (both invasive/borehole methods and non-invasive/surface wave methods) contain uncertainty. It should no longer be acceptable for Vs profiles to be reported without accompanying estimates of uncertainty. Otherwise, subsequent analyses will be performed with assumed estimates of uncertainty, which are often not accurate.

Without meaningful estimates of epistemic uncertainty and aleatory variability, a Vs profile used for seismic site response is often varied by +/- 20-30 percent in an attempt to account for these uncertainties. While performed with the goal of being conservative, this approach may actually be unconservative, as the problem is one of predicting resonances at the site, which may be diluted by such a wide range of input profiles that do not meaningfully represent site conditions.

The dataset will be available from the DesignSafe repository in the very near future.