The 2017 hurricane season was one of the worst on record. 17 named storm caused more than 100 direct fatalities, incurred $265 billion in damages and disrupted millions of lives.

We may not be able to prevent hurricanes from occurring, but we can improve our ability to predict them, move people out of harm's way, respond quickly to their aftermath and build our homes and infrastructure in a way that can survive the worst nature can throw at us.

A new tool called DesignSafe is helping to do so. A web-based research platform for the NHERI (Natural Hazards Engineering Research Infrastructure) Network, DesignSafe allows researchers to manage, analyze, and understand critical information about natural hazards – from earthquakes and tornados to hurricanes and sinkholes.

Supported by grants from the National Science Foundation (NSF) and developed at the Texas Advanced Computing Center (TACC) in collaboration with partners at The University of Texas at Austin, Rice University, and Florida Institute of Technology, DesignSafe is advancing research that will prevent natural hazard events from becoming societal disasters. This means helping engineers build safer structures in the future to withstand natural hazards and enabling emergency responders to better target their efforts.

The 2017 hurricane season put DesignSafe to the test and showed the promise of the platform, according to David Roueche, an assistant professor of Civil Engineering at Auburn University. Roueche was on the front lines of the season's hurricane response, participating in reconnaissance missions to coastal Texas, the Florida Keys, Puerto Rico and several Caribbean islands in the wake of Hurricanes Harvey, Irma and Maria. 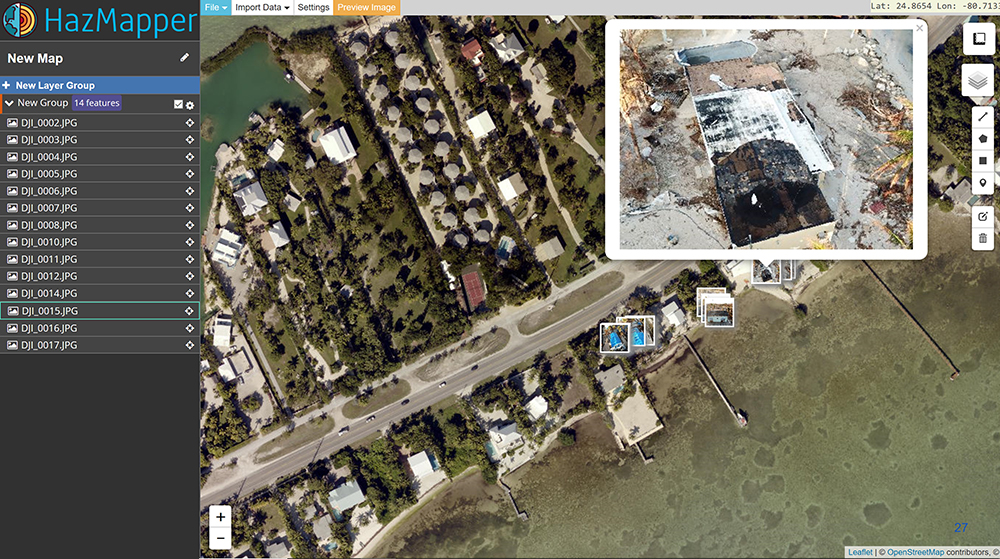 After Harvey, Roueche and his collaborators targeted clusters of single-family homes impacted by a range of wind speeds. They inspected more than 1,000 individual homes and logged more than 5,000 geotagged photographs captured by ground-based teams and unmanned aerial vehicles. They participated in similar efforts after Irma and Maria.

DesignSafe helped them in a variety of ways. They coordinated their deployments via a virtual community channel on Slack (a cloud-based collaboration tool) established by DesignSafe; they used wind map data developed by other researchers and shared on DesignSafe to determine where they would focus their efforts; and once they began capturing data in the field, they uploaded it immediately to DesignSafe and used mapping and visualization software like HazMapper and QGIS to generate maps that synthesized their and others' data collections.

"We were interested in capturing data about structures before they're destroyed, torn down and rebuilt," Roueche said. "This is perishable data – that's the purpose of the NSF RAPID program – to capture this perishable data before it's lost."

Roueche and his team found examples of houses side-by-side, built around the same time, where one was completely destroyed and the other was intact. What factors influenced survival? And how could rebuilding efforts be improved by understanding what features led some structures to stand up to storms? 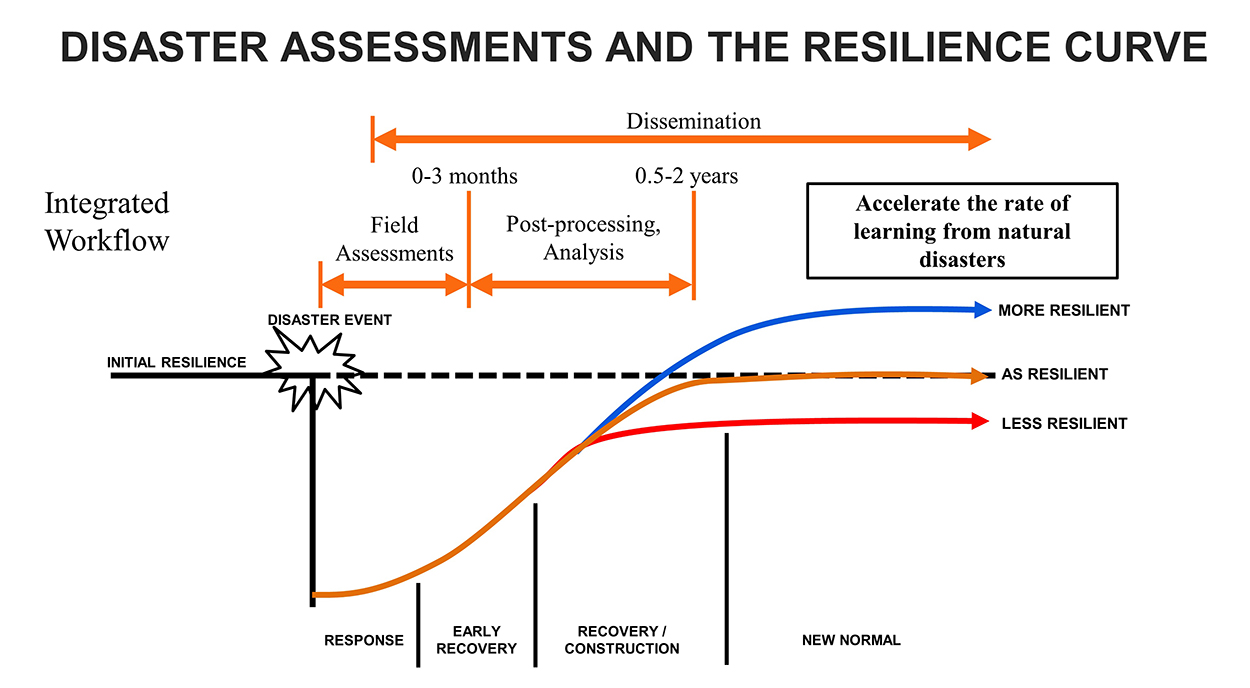 DesignSafe's integrated workflow accelerates the "resilience curve" so recommendations from natural hazard engineers can be disseminated in months rather than years.

DesignSafe's Reconnaissance Portal, which launched in 2017, provided both the computing capabilities Roueche needed for his analyses and a place to share more than 200 gigabytes of gathered data. The portal also allowed his team to immediately begin quality control and assessments on the data and rapidly generate reports that others going into the field later could use and contribute to.

Typically, it takes years for data gathered by researchers after a storm to be analyzed and reported on, which means rebuilding efforts cannot take advantage of engineers' insights. With a system like DesignSafe, however, there is hope that the "resilience curve" can be accelerated and that recommendations can be disseminated in months.

"We want cities to be able to rebuild more resiliently," Roueche said. "Typically, it's one to five years before products from data are out in literature. That doesn't allow us to help communities in rebuilding. By having a more streamlined workflow, standardizing processes, and publishing data sooner, it allows us to affect the reconstruction process and have a greater impact. That's why I'm super excited about where this is going."

(Roueche's collaborators included: Frank Lombardo from University of Illinois at Urbana-Champaign, Rich Krupar from the University of Maryland, Daniel Smith from the Cyclone Testing Station at James Cook University and Tracy Kijewski-Correa from Notre Dame University.)

In addition to enabling post-storm reconnaissance, being on the front-lines of Hurricane Harvey inspired DesignSafe's developers to create new tools to assist first responders in the future. 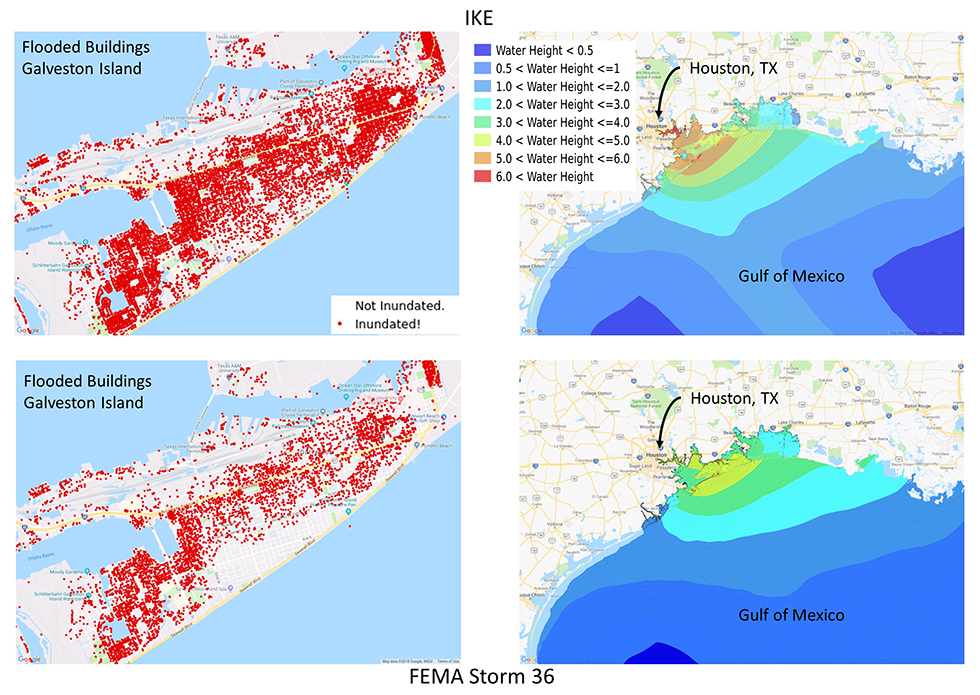 A new tool developed by the DesignSafe team integrates diverse datasets (simulation, elevation, addresses) from different technical domains and across a range of scales to help answer questions like: 'Did my home flood?'

"While there, a first responder said to me: ‘I want to know a list of addresses in Houston that have been flooded above their electrical outlet height. You have a supercomputer, you can do that right?'" Stanzione recalled. "We weren't able to provide that assistance in the moment, but it inspired us to create such a tool."

The components required for such an analysis — storm surge forecasts, elevation maps and home constructions records — already existed. But the ability to connect these datasets and generate a list of potentially damaged homes in a reasonable amount of time did not.

In the months that followed, researchers on the DesignSafe team stitched together tools to integrate simulations and data across scales, from the entirety of the Gulf of Mexico to a particular stretch of coastline, and from individual neighborhoods to specific homes.

Using data from 2008's Hurricane Ike and from a hypothetical storm that FEMA uses for their research, the DesignSafe team showed that it is indeed possible to generate a list of potentially damaged addresses in real-time. In fact, all aspects of the process can be computed within DesignSafe, using TACC's massive supercomputers in the background.

"We can go from gulf-wide, large-scale HPC simulation to, ‘Did this house flood or not?'" Stanzione said. "It's a long-time goal that was not technologically possible before, but that we've been able to get to. All of the data stays in the DesignSafe environment. The next step is determining how we can automate these workflows so they run automatically."

When the next storm hits, thanks to DesignSafe, first responders will have the information they need for quick action at their fingertips.