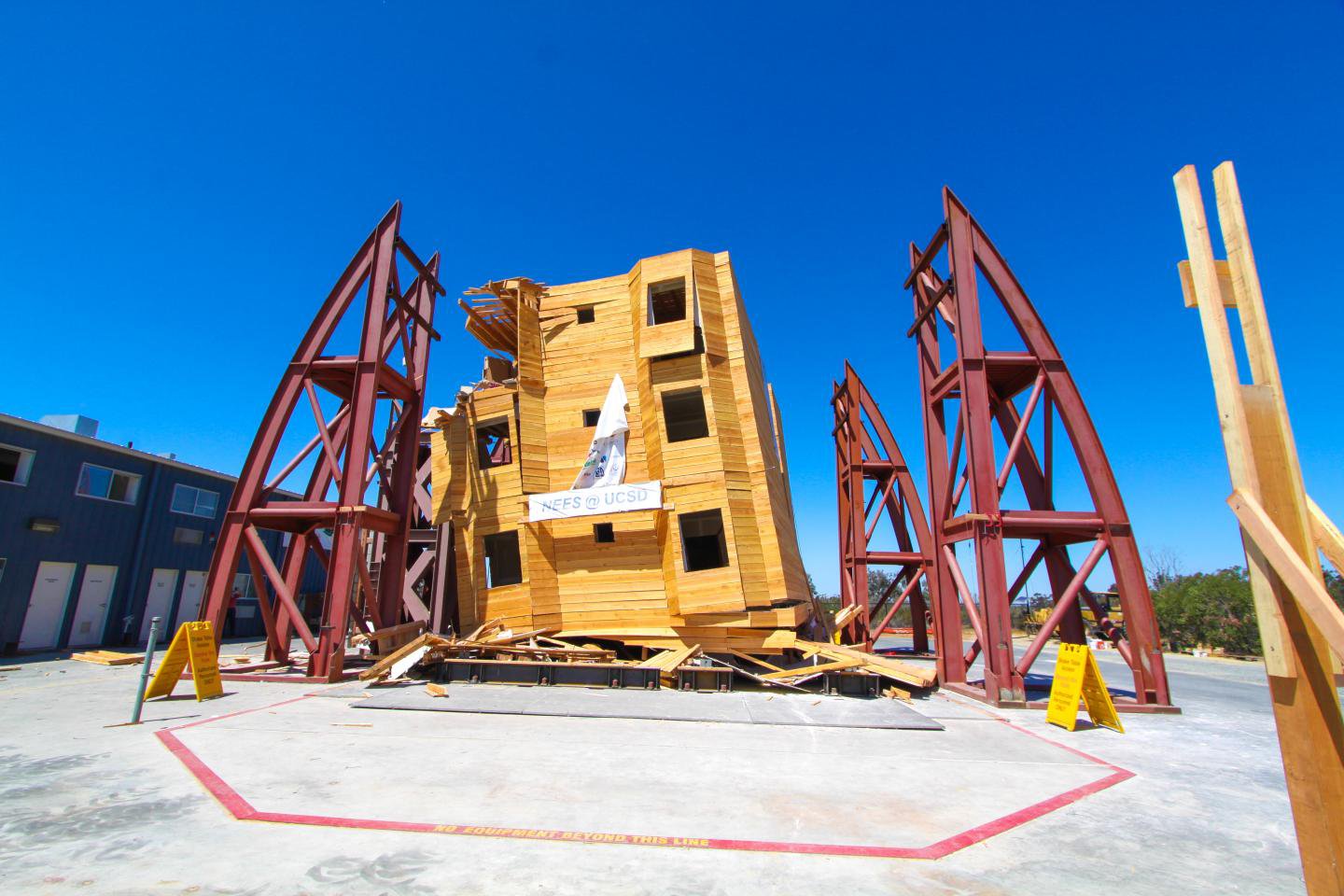 A wood frame, soft-story building was tested to failure in 2013 on the shake table. Credit: University of California San Diego.

October 17, 2018 — The world's largest outdoor earthquake simulator, operated by structural engineers at the University of California San Diego, has received a $16.3 million grant from the National Science Foundation to upgrade the facility to expand its testing capabilities. The facility is one of nine experimental facilities in the NSF-funded Natural Hazards Engineering Earthquake Research Infrastructure (NHERI) program.

The funds will enable the simulator, also commonly known as a shake table, to more realistically recreate the motion of the ground during strong earthquakes. After the upgrade, the facility will be able to test the heaviest test specimens in the world, from multi-story buildings, to bridge columns, bridge bents, wind turbines, with a full range of ground motions that can occur during an earthquake.

Until now, the shake table had only been able to move back and forth in one direction. The upgrade will allow the table to move in all directions (back and forth, up and down, left to right, yaw, pitch and roll).

"We will be able to reproduce earthquake motions with the most accuracy of any shake table in the world," said Professor Joel Conte, in the Department of structural engineering at UC San Diego, and principal investigator for the NSF upgrade grant.

Being able to reproduce a complete earthquake motion is important because during a temblor, the ground doesn't just shake horizontally. For example, during the Northridge earthquake in the Los Angeles area in 1994, bridge columns punched through bridge decks, hinting a strong vertical motion of the ground. Similarly, during the 1971 San Fernando earthquake, the buildings twisted and swayed hinting that the ground was probably rotating.

If engineers were to repeat, after the upgrade, the more than 30 structural and geo-structural tests performed on the shake table since its inauguration in 2004, they would find different levels of damage and different failure modes, Conte explained.

"This upgrade will have a huge impact on earthquake engineering," he said. "It will accelerate the discovery of knowledge engineers need to build new structures (buildings, bridges, power plants, dams, levees, telecommunication towers, wind turbines, retaining walls, tunnels and more) and retrofit older structures. It will enhance the resiliency of our communities."

The first structure to undergo tests on the shake table after the upgrade will be a full-scale 10-story building made from cross-laminated timber. The goal of these tests, led by Shiling Pei, a professor at the Colorado School of Mines, will be to gather critical fundamental data to design wood buildings as tall as 20 stories that do not suffer significant damage during large earthquakes. That is, not only can occupants leave the building unharmed, but they can also return and resume living in the building shortly after an earthquake.

Today, more and more big cities such as Los Angeles, San Francisco and Seattle, are looking to retrofit old concrete buildings for seismic safety. This will require large-scale tests of retrofitting systems, which can only be done on a shake table like the one being upgraded here at UC San Diego. The shake table also will be able to test large industrial systems, such as heating and air conditioning units for hospitals, and large electrical transformers for utility companies and the grid.

The Shake Table's Impact on Society

In the past 14 years, research at UC San Diego's shake table, which is housed at the university's Englekirk Structural Engineering Center, has led to important changes in design codes for commercial and residential structures and new insights into the seismic performance of geotechnical systems, such as foundations, tunnels and retaining walls. It also has helped validate the use of innovative technologies to make buildings more likely to withstand earthquakes.

For example, in San Francisco, approximately 6,000 soft-story wood-frame buildings are being retrofitted to make them safer in strong earthquakes. Full-scale testing of retrofit systems for these "soft-story" wood frame buildings on the UC San Diego shake table, led by Professor John van de Lindt from Colorado State University, was critical to make this possible.

The shake table was originally designed in 2001-02 to reproduce all the directions of ground motion in an earthquake, but it was built with the capability of only one horizontal direction of motion due to budget constraints. In 2009, the Jacobs School of Engineering at UC San Diego received $2 million from the Department of Energy to add vertical actuators enabling the table to move up and down. But they did not have the hydraulic power needed to reproduce a vertical ground motion, until now.

This NSF grant will put in place the necessary power infrastructure, adding new hydraulic pumps, a cooling tower and very large accumulator banks for the facility's hydraulic-powered system. It will cover the costs of reconfiguring the existing two horizontal actuators, adding another two horizontal actuators, and powering the six vertical actuators to generate table motion in all three directions (longitudinal, transverse and vertical), and all three rotations (yaw, pitch and roll) as well.

"The upgraded shake table facility will also provide an unprecedented and exceptional tool to educate graduate, undergraduate, and K-12 students, as well as the news media, policy makers, infrastructure owners, insurance providers and the public, about natural disasters and the national need to develop effective technologies and policies to prevent these events from becoming societal disasters," said Lelli Van Den Einde, teaching professor at UC San Diego and co-principal investigator for the NSF upgrade grant.

The shake table facility will be closed from February 2020 to July 2021 to perform the upgrades.