West Lafayette, IN, July 10, 2019 — Responding to the recent Searles Valley earthquakes in Southern California — an M6.4 on July 4 and an M7.1 shortly thereafter on July 5 — natural hazards engineers and other researchers funded by the National Science Foundation (NSF) moved into action. It is all part of NSF’s Natural Hazards Engineering Research Infrastructure network, known as NHERI.

Geotech reconnaissance — and an M7.1 surprise

Within hours of the series of earthquakes and aftershocks that occurred over the July Fourth holiday, researchers from the NSF-supported Geotechnical Extreme Events Reconnaissance (GEER) Association were onsite in the affected region collecting valuable data about the geophysical aspects of these significant events. Equipped with cameras and other data recording devices, the GEER team sought to measure important physical effects of the earthquakes.

“The GEER team arrived in Ridgecrest on the afternoon of July 5 to perform some initial reconnaissance following the M6.4 earthquake and arrived back at the hotel just in time to experience the M7.1 event,” said Scott J. Brandenberg, GEER team member and professor of civil and environmental engineering at UCLA.

“It was an exhilarating, and slightly terrifying experience for all people who experienced the earthquake. We focused our attention on mapping the surface rupture from both events and made detailed measurements of ground crack patterns near Highway 178. We studied a water pipe running parallel to Highway 178 that was broken by surface fault rupture. We also studied several liquefaction-induced lateral spread events in Argus and Trona.”

Research teams are sharing and publishing data and their assessment reports in the Reconnaissance Portal, a key component of NSF-NHERI’s DesignSafe cyberinfrastructure. A collection of information on the Ridgecrest sequence of earthquakes is already available for researchers to use.

“The Recon Portal is open to members of the public seeking authoritative details about earthquake damage and recon activities,” said Tim Cockerill of DesignSafe and director of user services at the Texas Advanced Computing Center at the University of Texas Austin. “The DesignSafe team is committed to serving field research teams throughout the lifecycle of the reconnaissance efforts by providing a variety of resources including our communications tools, the Recon Portal, our data publishing service, and GIS tools such as the Hazmapper and QGIS.”

Also on DesignSafe, researchers are using Slack channels to share news and to coordinate their onsite and virtual investigations. “Having the DesignSafe Slack channels for communication was absolutely integral to ensuring collaboration between researchers and across the various research teams,” said Lori Peek, principal investigator of the NSF-NHERI CONVERGE facility. CONVERGE is dedicated to increasing connections between social science and engineering communities and fostering effecting coordination in major disasters.

“The NHERI infrastructure, including the RAPID facility, which provides tools and resources for data collection, as well as DesignSafe, which offers a virtual space for data sharing, are vital for researchers conducting reconnaissance missions,” said Julio Ramirez, director of the Network Coordination Office for NHERI.

Prior NSF-funded reconnaissance work has led to breakthroughs in terms of understanding why buildings perform well, and why they fail in a disaster. Research studies designed to collect perishable data have also helped improve emergency response operations and have changed how government agencies work with socially vulnerable populations.

More information on the various NHERI Facilities is available at: DesignSafe-ci.org. 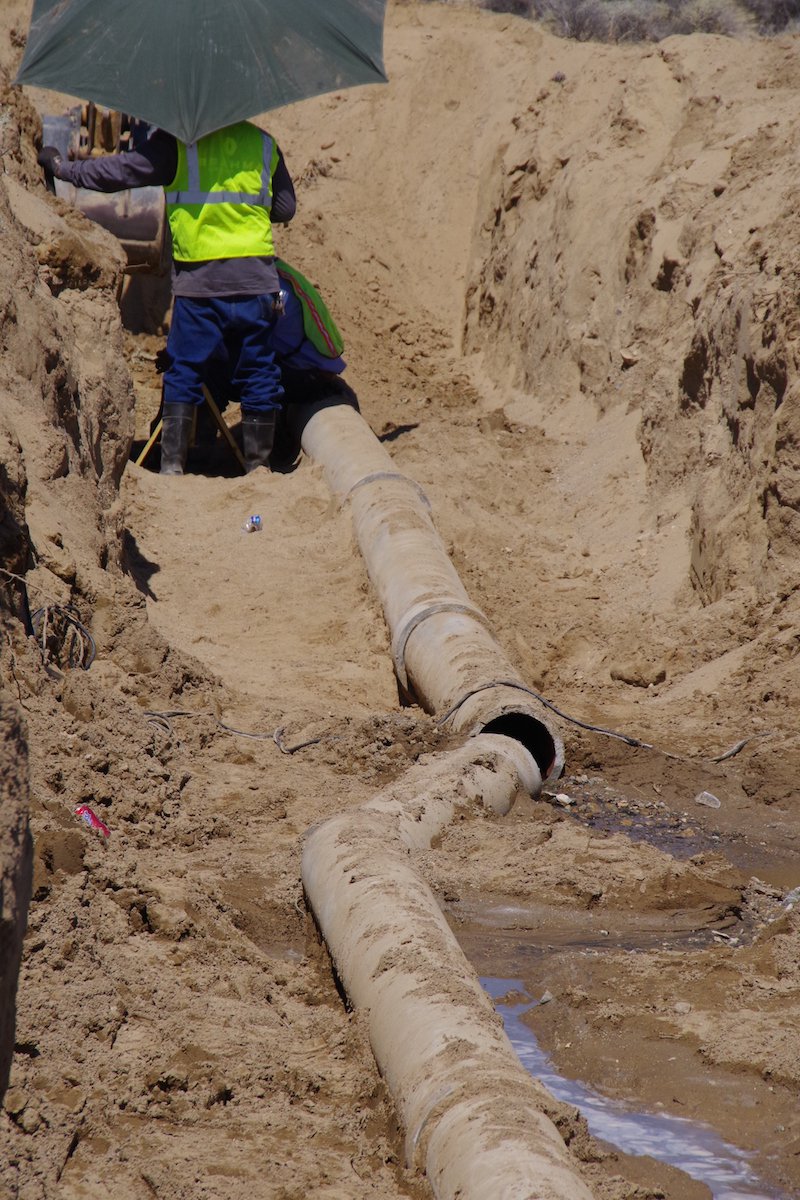 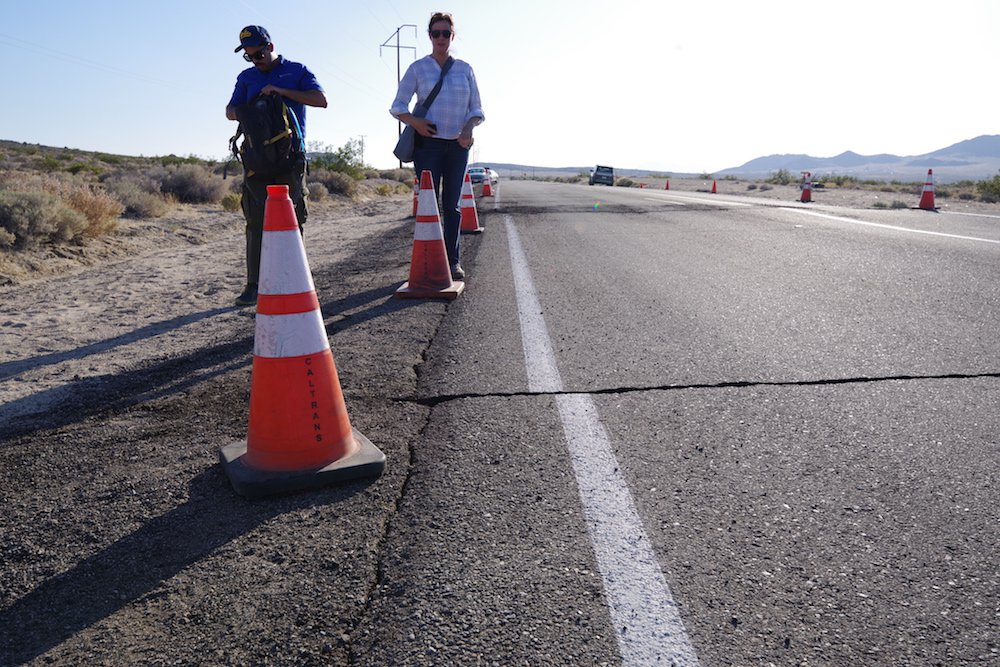 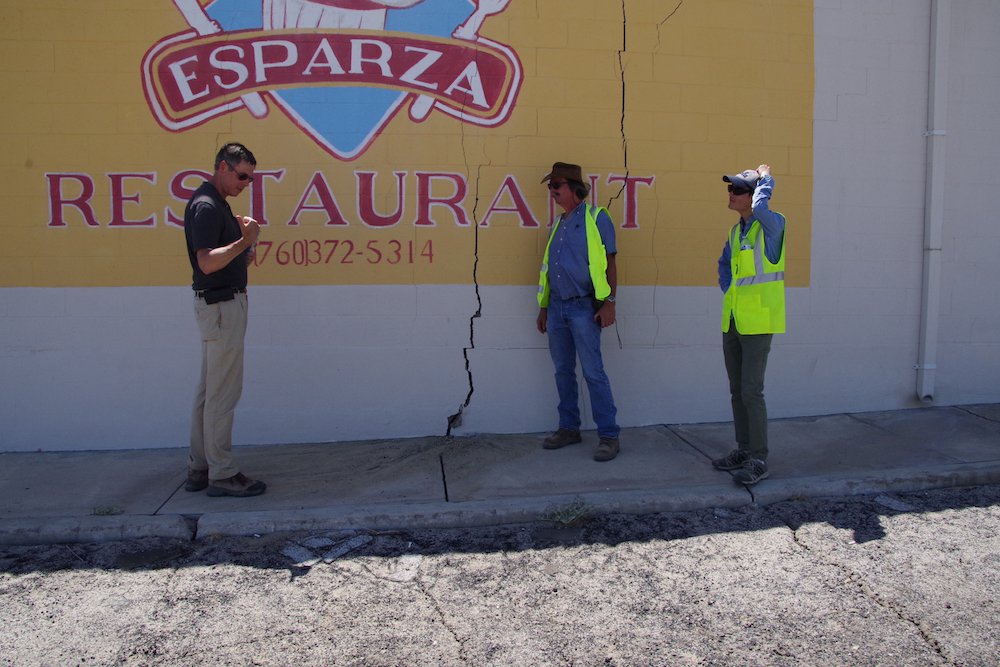 GEER team members, Jonathan Stewart, Craig Davis and Pengfei Wang, at Esparza Restaurant in Trona near a wall that cracked near the location of surface evidence of liquefaction. (Photo: Scott Brandenberg/GEER)