Above: Aerodynamics wind testing at the NHERI FIU WOW to obtain wind pressure time histories distributed on the building.

Below: Investigator James Ricles demonstrated two key findings: One is that outrigger damping systems are useful for mitigating damage from natural hazards to tall buildings.

The other is the fundamental conclusion that the real-time hybrid simulation (RTHS) methodology is viable for simulating and assessing tall buildings for response to natural hazards such as wind and earthquakes. 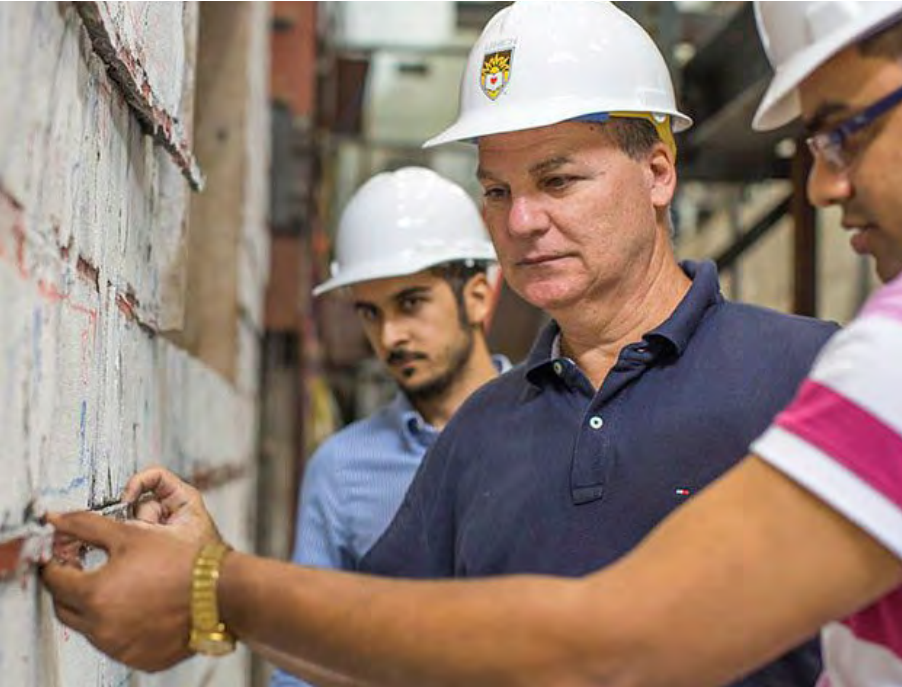 A NHERI Lehigh study demonstrates the viability of RTHS for testing wind response in tall buildings and the value of outrigger damping systems for mitigating wind damage as well as earthquake damage.

In a recent NSF-funded study performed at the NHERI Lehigh Experimental Facility, a Lehigh University team led by principal investigator James Ricles demonstrated two key findings: One is that outrigger damping systems are useful for mitigating damage from natural hazards to tall buildings. The other is the fundamental conclusion that the real-time hybrid simulation (RTHS) methodology is viable for simulating and assessing tall buildings for response to natural hazards such as wind and earthquakes.

To date, limited studies have experimentally investigated the damped outrigger system response to wind or earthquake loads on tall buildings. It is impractical or impossible to test such a large structural system in a boundary layer wind tunnel or in an existing wind simulation facility due to model size limitations.

Similarly, it is impractical to test these systems for seismic excitations even in large shaking table facilities. The RTHS experimental method not only eliminates such limitations of physical testing and computational simulations — but it also integrates their benefits.

With real-time hybrid simulation, the definition of the system can be expanded beyond the size of typical laboratory physical models. The response of the system to a dynamic load is simulated by solving the equations of motion in real time, which enables physical testing of rate-dependent devices present in the system.

Until this study, the RTHS technique has primarily been applied to simulate seismic effects in structures. This novel work at Lehigh successfully extends its application to wind response simulation of a 40-story tall building outfitted with nonlinear fluid viscous dampers.

An RTHS enables a given system component, one for which an accurate numerical model is unavailable, to be modelled physically in the laboratory. The rest of the system is then modelled numerically. The physically and numerically modelled parts are termed as the experimental and analytical substructures, respectively.

For this study, 3D nonlinear building models were created in which the building frame is modelled numerically and the dampers are modelled physically. The team performed a series of 3D large-scale RTHS for both seismic and wind loadings. 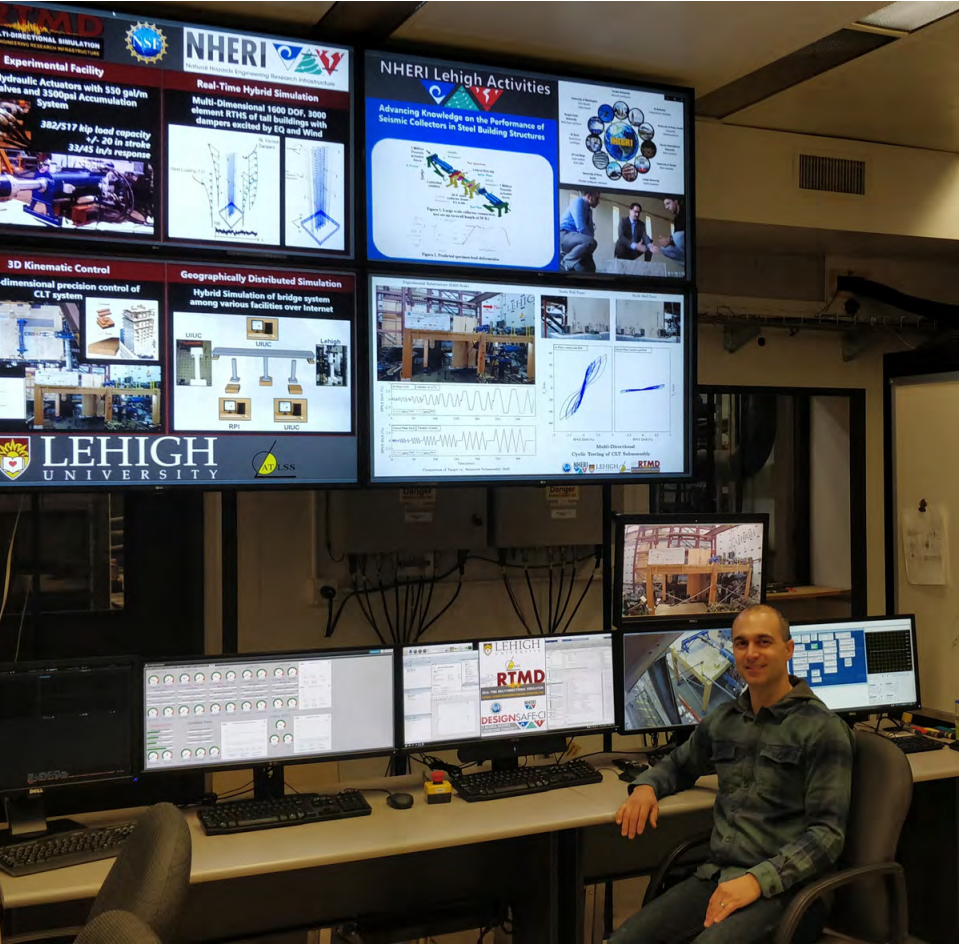 For the tall building, the wind excitation force was determined based on wind tunnel tests conducted on high-rise buildings by Tokyo Polytechnic University.

To this end, a basic wind speed of 110 mph with a mean recurrence interval (MRI) of 700 years was considered. The earthquake loading was based on scaling natural earthquake accelerograms to the Maximum Considered Earthquake (MCE) 2,475-year return period hazard level.

To conduct RTHS in a damped outrigger system configuration, vertically oriented nonlinear fluid viscous dampers were added between the ends of the outriggers and the perimeter columns at the 20th and 30th stories and at the roof level of the prototype building — an office-building prototype developed for use by the Pacific Earthquake Engineering Research Center (PEER) Tall Building Initiative.

IMPACT ON THE FIELD OF NATURAL HAZARDS ENGINEERING

After multiple simulations conducted at the NSF-supported NHERI Lehigh Experimental Facility, the researchers concluded that RTHS is highly useful and a viable means in assessing the performance of the damped outrigger system under wind and earthquake loads. Further, the RTHS data shows that the damped outrigger system has great potential in mitigating wind hazards — as well as seismic hazards — in tall buildings.

Collaborators at FIU include Arindam Chowdhury, Amal Elawady and Peter Irwin. This collaborative effort will foster building capacity in RTHS related to wind engineering, produce algorithms and tools for research, and generate publications in conferences and journals. The outcomes will be documented on DesignSafe via links posted on the Multihazard Engineering Collaboratory on Hybrid Simulation (MECHS) to keep the research community abreast of new capabilities in RTHS. 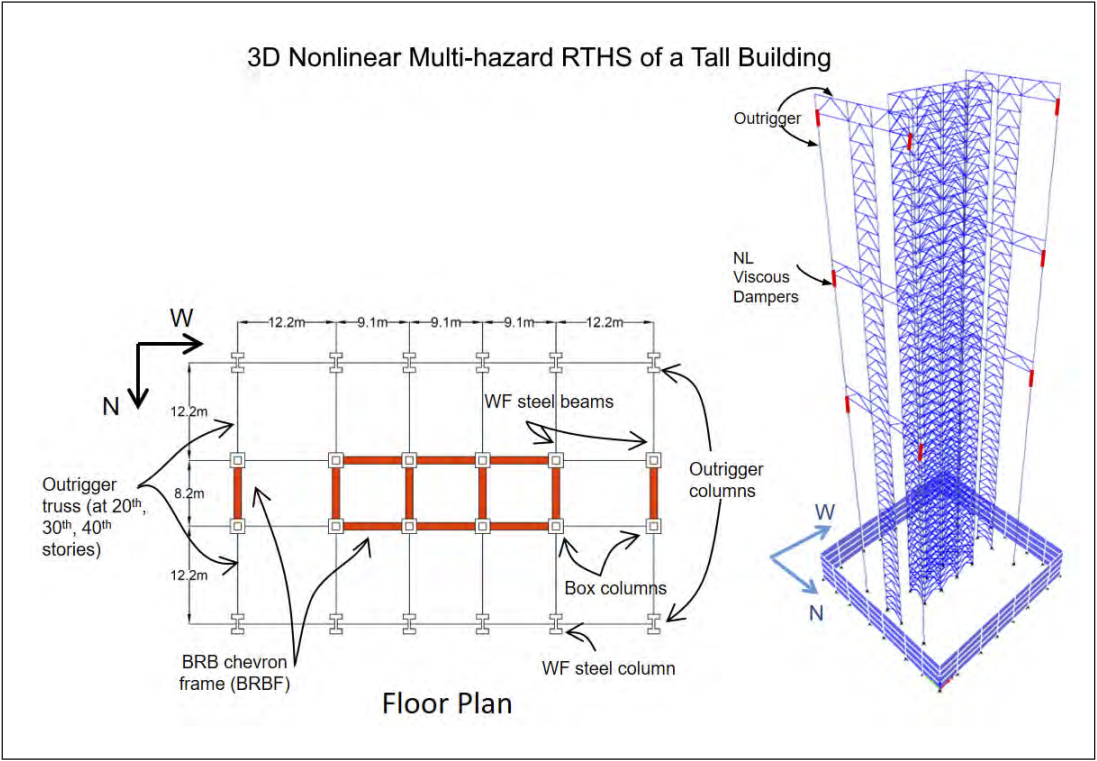 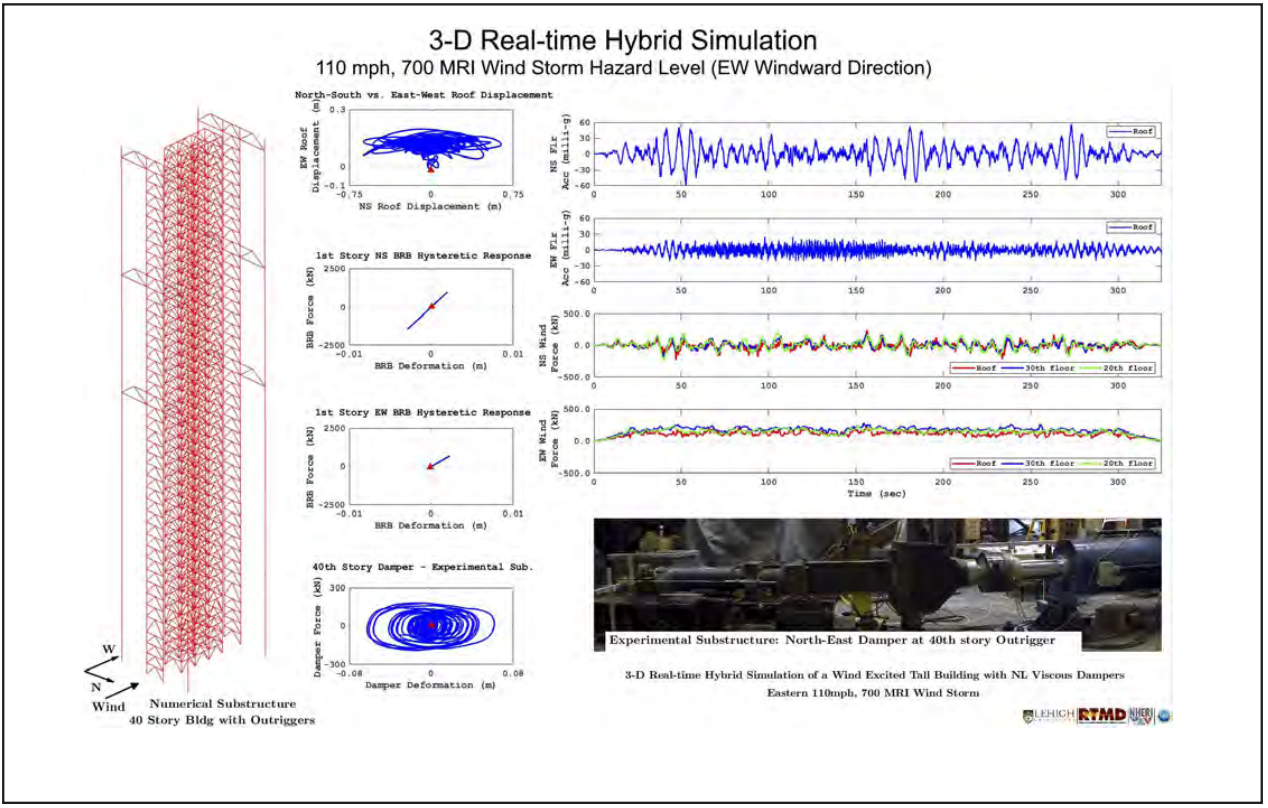 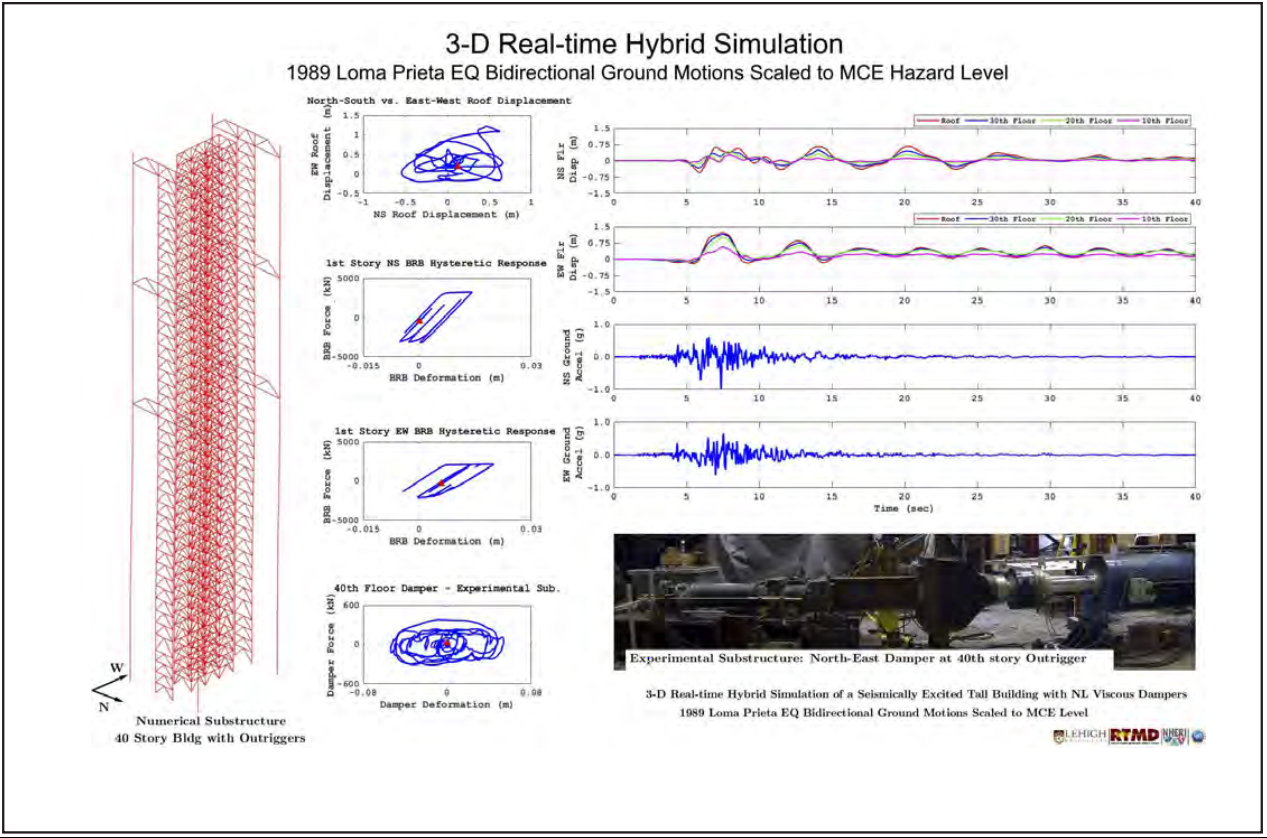 Grants Awarded Between Q2 and Q3 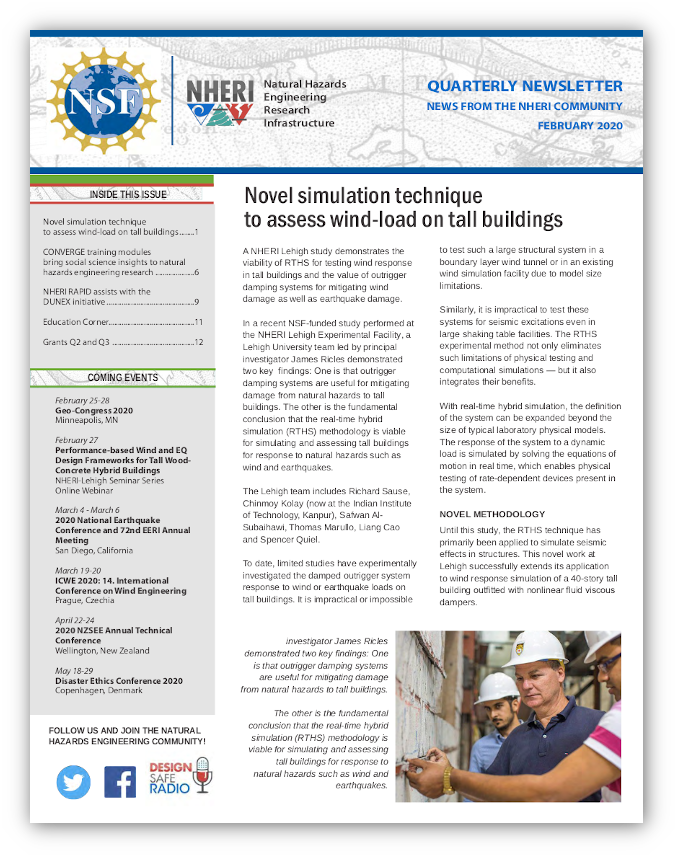