August 31, 2021 — In the wee hours of the morning on June 24, 2021, a 12-story beachfront condominium in Surfside, Florida, suddenly collapsed. Nearly 100 people were killed, making it the third-most deadly engineering disaster in US history.

There were no obvious reasons for the building to abruptly collapse. So what caused the tragedy at Champlain Towers South? The search for answers is where NSF RAPID engineering expertise comes into play.

Immediately following the event, the investigative team from the National Institute of Standards and Technology requested a deployment from the NSF-funded NHERI RAPID facility, based at the University of Washington.

NIST was aware of the NHERI RAPID facility’s unique collection of equipment and capabilities, thanks to the facility’s outreach efforts. Throughout the world, the NHERI RAPID is known as the team that specializes in providing tools and training to disaster reconnaissance groups. The RAPID’s tools and training were urgently needed for NIST’s investigative efforts in Surfside, Florida. A memorandum of understanding (MOU) was quickly drafted between NIST and NSF, allowing the RAPID tools to be deployed for this effort. The RAPID team packed up lidar surveying systems, drones, seismometers and accelerometers and caught the next flight to Miami.

Post-disaster damage data is perishable. Data reconnaissance teams are constrained by rescue, recovery and clean-up efforts – so RAPID missions regularly race the clock to collect the clues left behind. 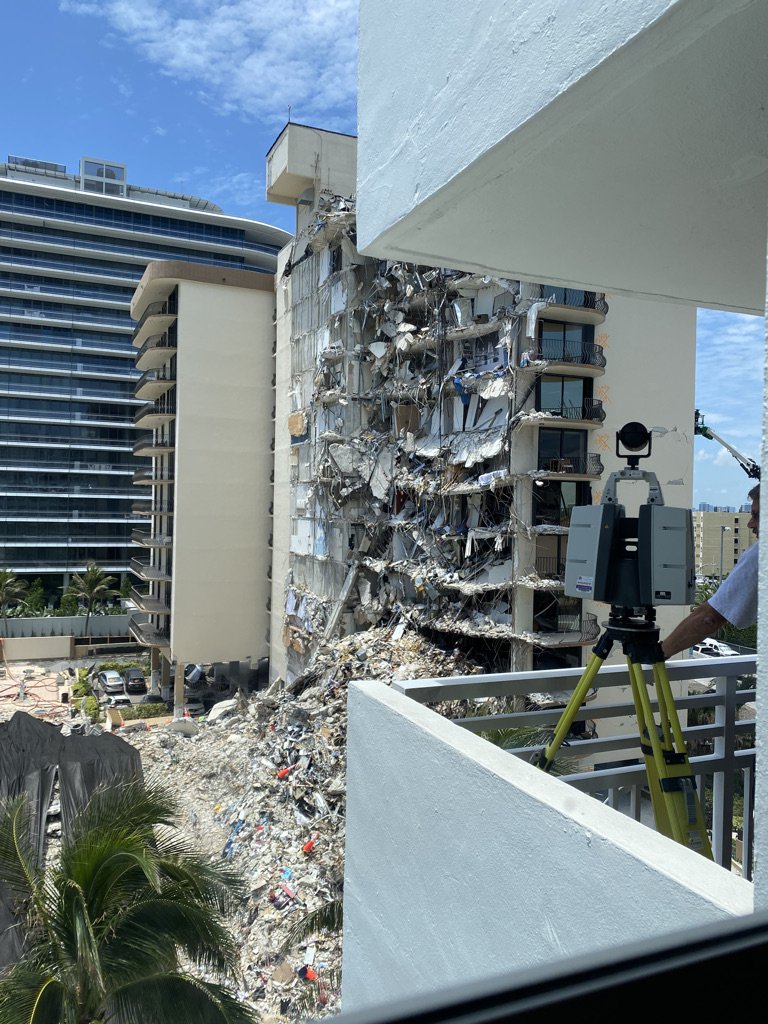 The NHERI RAPID Facility team members conducted high-resolution lidar scans of the standing portion of the tower and its debris pile before the rest of the tower was demolished. 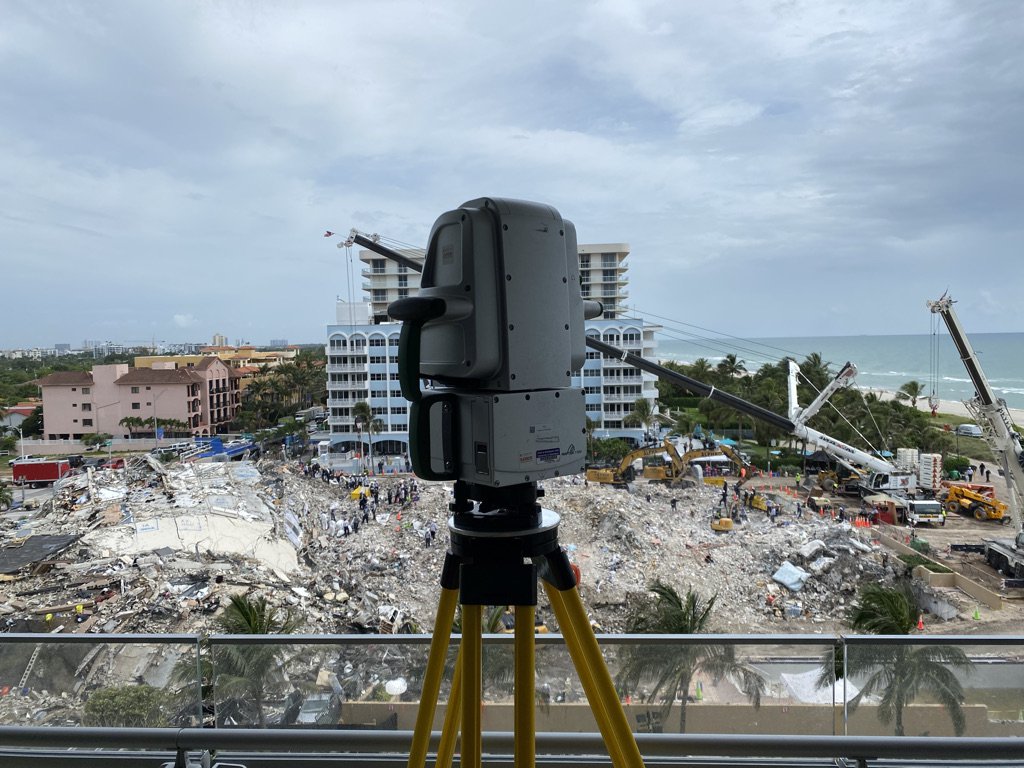 (Above) Daytime monitoring of debris pile via RAPID Facility lidar scanner at site of condominium tower collapse in Surfside, Florida. 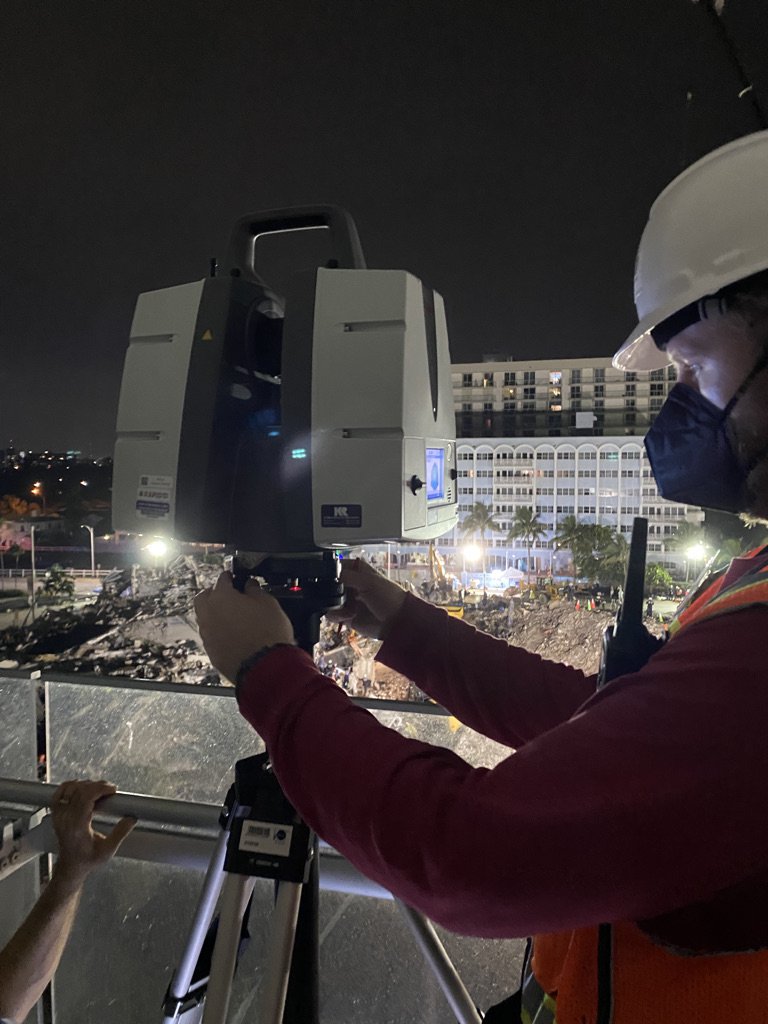 The original plan was to use lidar, drones, seismometers and potentially accelerometers to monitor the portion of the Champlain Tower South that had not collapsed and stood suspended over the rescue site. This was to help engineers on the ground determine if the rescue operations were safe to continue with the heavily damaged but still standing portion of the building present.

But tropical storm Elsa was approaching the Florida coast. The remaining damaged portion of the south tower structure needed to be destroyed before the storm arrived, to ensure the safety and continued operations of the rescue teams. Suddenly, long-term structural monitoring was out. It became vitally important to capture a full, three-dimensional digital model of the remaining portion of the collapsed condominium building before it was imploded.

The RAPID team set up its lidar system on the rubble-laden site and raced to capture as much data as possible. They used half-hour lidar scans, which provided enough resolution to image key structural components of the still-standing structure. Because lidar uses near-infrared laser light to create point clouds — which are viewable, true-color digital models of 3D objects such as buildings – the RAPID team could work as it grew dark.

The team completed several lidar scans, including the debris of the collapsed portion of the tower, gathering enough detail to make key measurements. 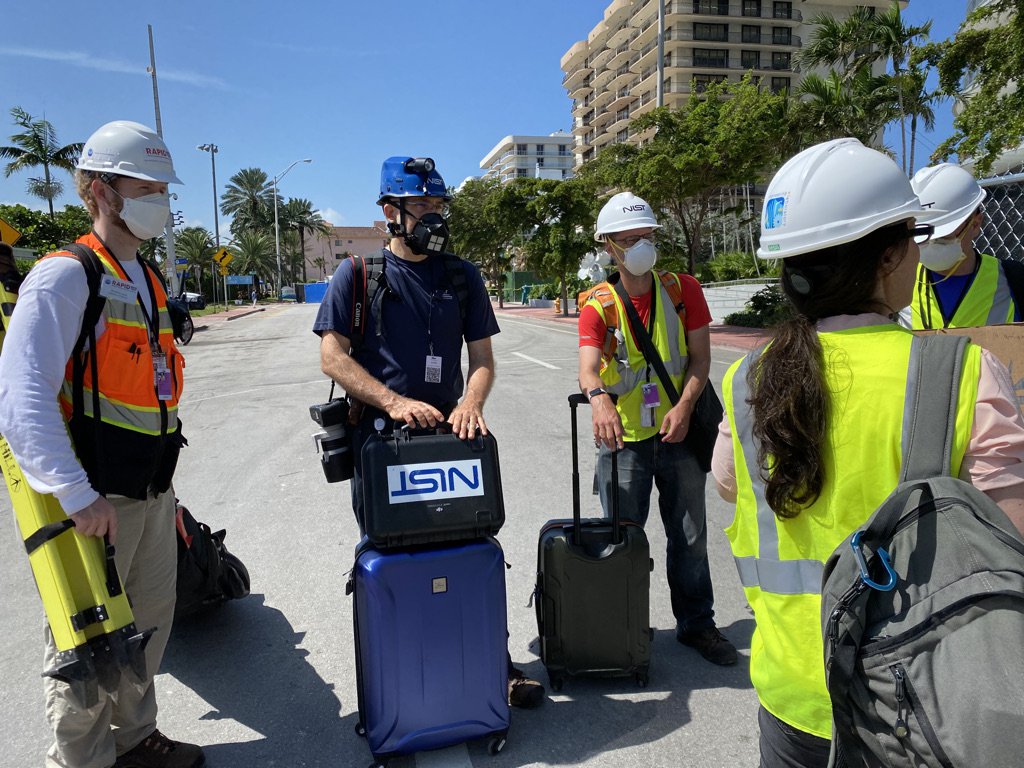 RAPID and NIST team members meet before the start of the day at an entrance to the site of the collapsed condominium tower in Surfside, Florida. 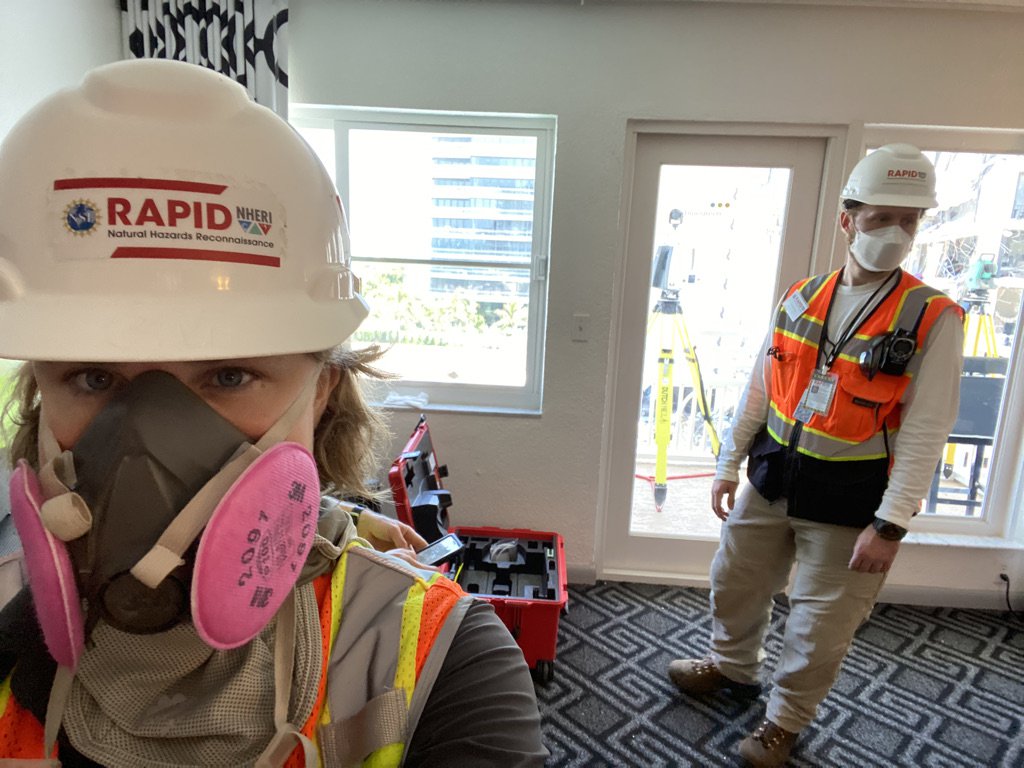 The remaining portion of the Champlain Towers South was demolished on July 4, but the RAPID team remained to scan its debris pile. Like an accident scene, the site contained many clues to the event’s cause. As debris was removed by the rescue teams, the RAPID team scanned the newly revealed layers of rubble.

To gather baseline data about Champlain Towers South, the RAPID team was also sent to monitor Champlain Towers North, a similar condominium building nearby. By attaching seismometers and accelerometers to the remaining structure, the team could observe its vibrational response to heavy equipment on the site. These measurements will help NIST validate future computational models.

After 10 days in Surfside, the RAPID team had completed its work. They had gathered an enormous amount of highly detailed lidar and drone data of the collapsed building as well vibration data from the similar tower nearby. As part of its mission, the RAPID group had also trained the NIST team in data collection. The NIST team remained onsite and used the RAPID’s lidar and drone equipment to perform more scans of the demolished building, as excavations continued down to the basement grade.

It will take several years to discover what caused the Champlain Towers condominium to collapse. The NIST team will use the high-quality data collected by the NHERI RAPID to help create simulations of the collapse – and to validate their models – all of which will help determine the specific engineering failures that led to this tragic event. 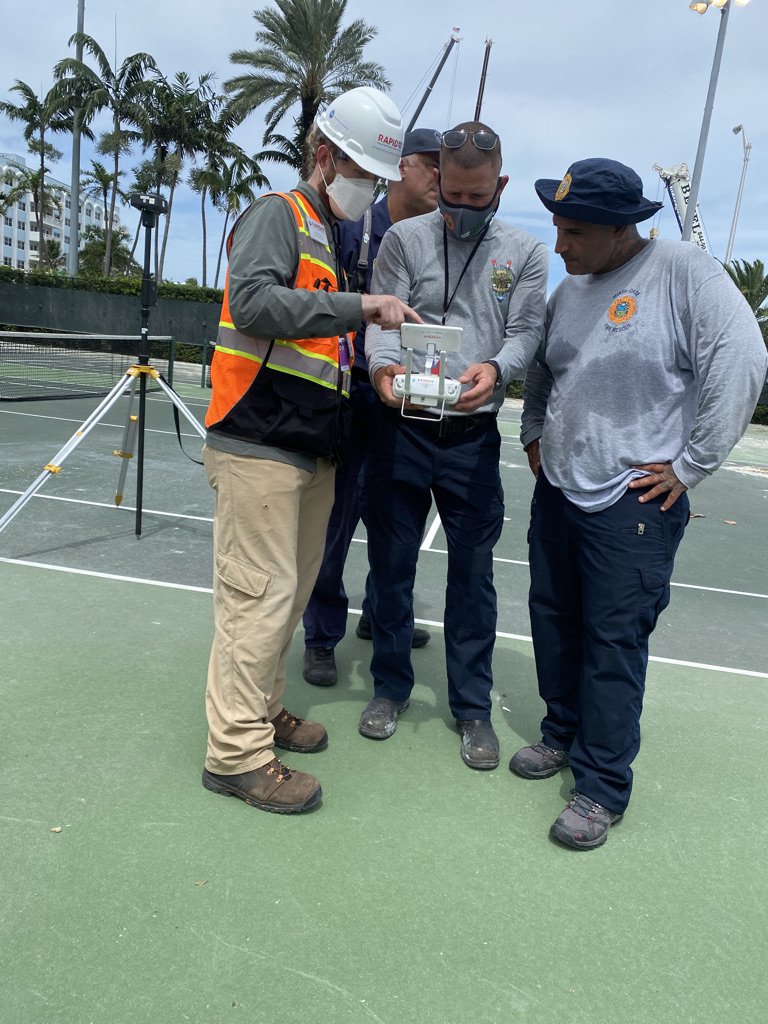 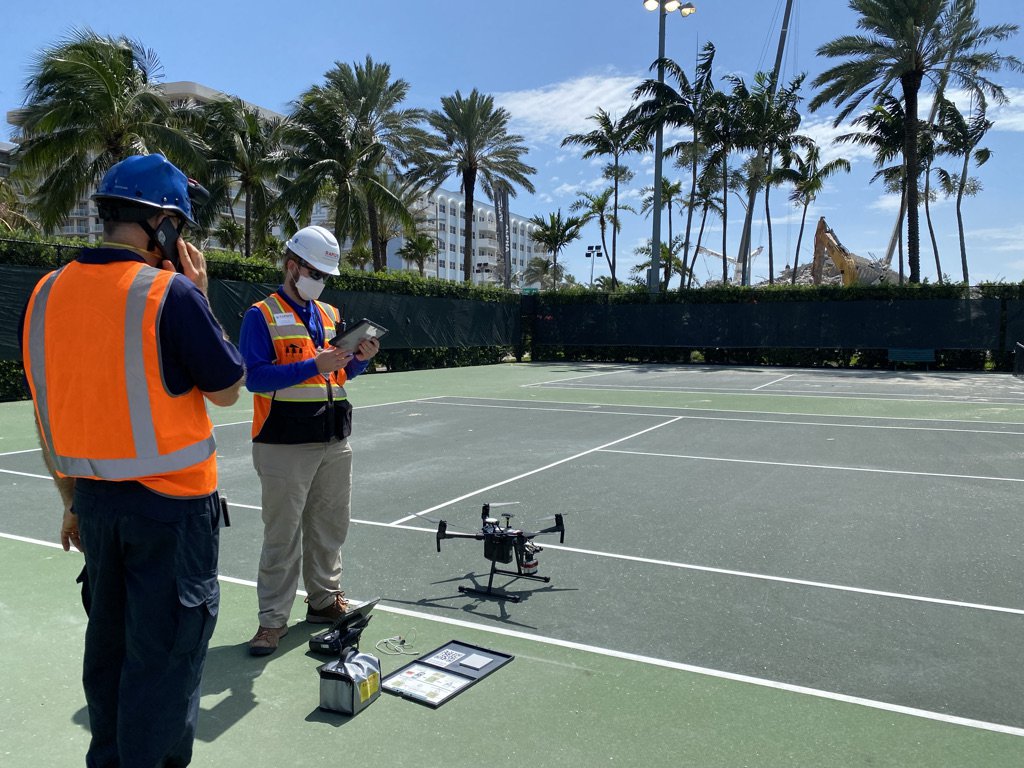