On the Level with Hurricane Matthew 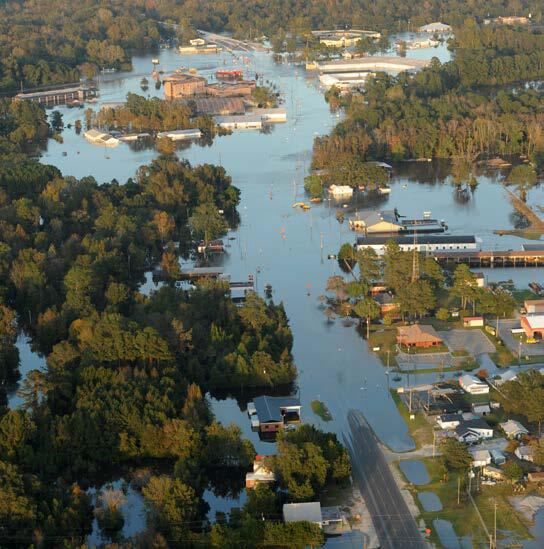 AUSTIN, Texas, May 25, 2021 — Hurricane storm surge is one of the most hazardous and difficult parts of a hurricane to forecast. Researchers at the University of North Carolina, Chapel Hill (UNC) have developed a data assimilation method for improving multi-day forecast of coastal water levels.

Surge can devastate life and property. High winds of more than 70 miles per hour can spray walls of breaking water over 20 feet high and more than a mile inland. Surge causes 49 percent of the hurricane deaths in the U.S (1963 to 2012), and it damages on average 10 billion dollars of property every year (1900–2005). Hurricane Matthew was the most powerful storm of the 2016 season, killing 28 people from flooding and causing 10.3 billion dollars of damage.

Asher’s team explored the physical components influencing water levels from storm surge that are not represented in even the best simulation codes, such as the widely-used Advanced Circulation model (ADCIRC). According to Asher, the physics in the model is too complicated and too costly to account for everything, especially under forecast settings where simulations must be completed quickly to be useful. Errors in simulating water level can be dominated by multi-day processes that are not included in the model, such as baroclinic processes, major oceanic currents, precipitation, steric fluctuations, and far-field atmospheric forcing.

The data assimilation system can be broken down into four steps, (1) performing an unassimilated simulation, (2) time-averaging or low- pass filtering the difference between this simulation and observed water levels at observation sites, (3) generating a spatial difference field from these differences, (4) repeating the simulation with the added correction applied in the model. Credit: DOI: 10.1016/j.ocemod.2019.101483.

When most people think of a hurricane, its intense, windy core comes to mind. But on its perimeter, there are also atmospheric pressure changes and winds going in different directions. Those far-field effects far away from the storm can have a sizable influence on the water levels that determine how bad flooding can get.

“One of the bigger realizations we made is of how strong these far-field wind effects could be on the total water level signal,” Asher said. “We found a fairly low-cost data assimilation method was able to have a really big improvement on the simulated water levels and really improve the quality and accuracy of the simulations.”

Asher described the assimilation technique they used as optimal interpolation, which allowed them to use the time-averaged difference between observed and simulated water levels to create a water level error surface that confines the error and filters out high frequency fluctuations such as astronomical tides. They then applied that correction back into the model as a forcing term to basically push water in the simulation to where it should be and away from where it shouldn’t.

They used the ADCIRC model coupled with the SWAN wave model.

”We focused on the lower frequency component of the water level errors,” Asher said. “These are water level changes that occur over the course of usually a few days, since the model is good at capturing everything that happens daily, or even more often.”

“The DesignSafe interface is easy to use and it’s also easy to SSH. It gives you a command line so you can type to move things around, instead of just a point-and-click interface. Having the ability to do both was really advantageous,” Asher said.

Ultimately, improved water level forecasts help people on the ground respond to hurricane storm surge. It can be critical to not only know how high water will get, but how quickly it will rise.

“Knowing the timing of the water level coming in is critical for determining when to close floodgates,” Asher said. “The advances that we’ve made are going to have a big improvement on timing estimation.”

Said Asher: “Like a lot of things in science, the goal is to produce something as detailed, accurate, and simple as you can. There are a lot of complexities and challenges in the science. Providing a system that allows comprehensive publication of the simulations (inputs and outputs), observations and analysis data, and all source code makes DesignSafe an invaluable tool. It means that I was able to transfer and publish our work in a way that means anyone could access the data and easily run the code with new data applicable for their project. This sort of reproducibility and transparency facilitates great science, and means that the nuance and complexity needn’t be reduced for the sake of publication.”

NHERI is supported by multiple grants from the National Science Foundation, including the DesignSafe Cyberinfrastructure, Award #1520817.