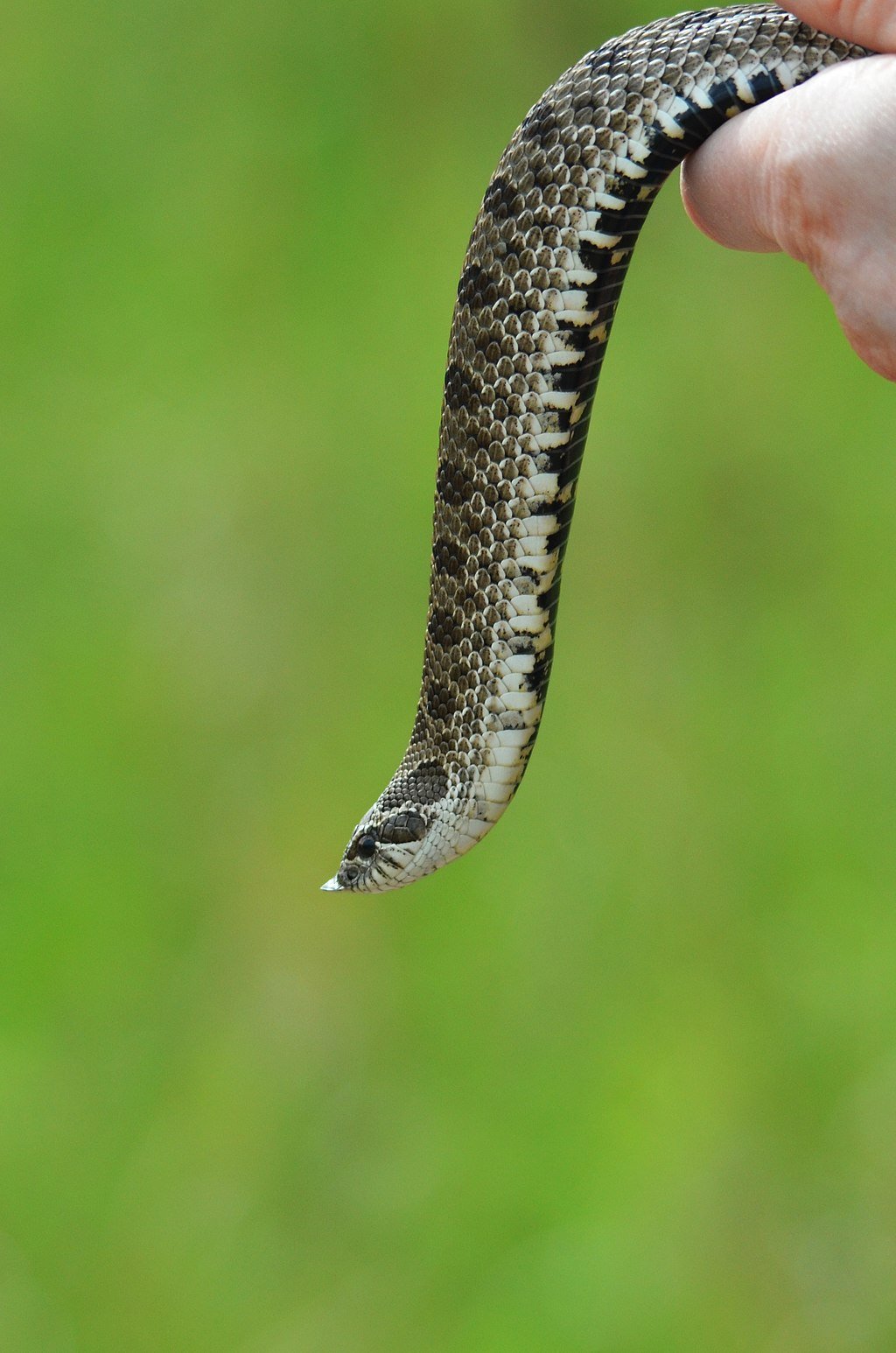 Above, a western hognose snake. Note the surface texture difference between the snake's dorsal and ventral scales. (Image: USFWS Midwest Region from United States, CC BY 2.0 via Wikimedia Commons.)

Bioinspired geotechnical engineering, naturally cross-disciplinary, involves careful examination of biological systems and organisms, extrapolating promising systems into practical — and human-scaled — designs, and then verifying the performance of those designs in the field.

It’s happening at the UC Davis Center for Geotechnical Modeling, where researchers use the facility’s large geotechnical centrifuges for testing the viability of bioinspired designs — in particular those focused on the interactions between soils and structures. The CGM is part of the NSF-funded Natural Hazards Engineering Research Infrastructure, NHERI.

For Alejandro Martínez, associate professor of civil and environmental engineering at UC Davis, a promising source of bioinspiration is snakeskin. Neatly enough, the belly scales of certain snakes have evolved to reduce friction as the animal moves in the forward or “caudal” direction and increase friction in the opposite, or “cranial,” direction. The ventral skin surface enables the animal to move efficiently through soils and easily slide up a tree without sliding down.

The phenomenon is called frictional anisotropy, or frictional directionality; it’s a property of a surface that exhibits different friction coefficients depending on the direction of movement. It’s a bit like petting a dog: smooth in one direction, rough in the other.

Martínez thinks surfaces engineered with snakeskin-inspired frictional directionality may improve the strength and efficiency of geotechnical systems such as driven piles, soil nails, anchors for offshore structures, tunnels, and geosynthetics. All these geotechnical elements are loaded in different directions during their use, from installation through service life. For example, low friction is optimal for driving piles, but high friction is vital for anchoring a pile in place.

"Imagine a pile that's easy to install and yet strong enough to support the applied loads,” says Martínez.

Currently, no geotechnical structures take advantage of frictional directionality. Piles, for example, are notoriously difficult to install in dense soil. “It’s a challenge in the field. But imagine a pile that’s easy to install and yet strong enough to support the applied loads,” says Martínez. With a snakeskin-inspired surface, he says, we get the benefit of a pile that is easier to install as well as firmly anchored for a good foundation.

For Martínez and his team, the first thing to figure out was — snakes. There are more than 3,000 snake species on Earth. Where to start? With a herpetologist, naturally. Martínez explained his idea to Brian Todd, professor in the UC Davis Department of Wildlife, Fish and Conservation Biology. Todd suggested a range of species to examine, enabling Martínez hone in on 30 species of snakes.

Using preserved snake specimens from UC Berkeley’s Museum of Vertebrate Zoology, Martínez and his team examined 70 snakeskins in all. They created detailed profiles of each animal’s ventral skin, including high-resolution 3D scans. The most promising skin geometries were those of the western hognose snake, the parrot snake, and the Saharan horned viper.

The most promising skin geometries were those of the western hognose snake, the parrot snake, and the Saharan horned viper.

For instance, Martínez and his team recently collaborated with Duncan Irschick, biologist with the University of Massachusetts Amherst, and Simon Baeckens, biologist at Ghent University, to make a significant contribution to biological research. Together, the engineers and biologists explored the correlations between the topography of snakeskin and the environment in which the snakes live, using the very dataset of snakeskin scans obtained by Martínez at UC Davis for his biogeotechnics work.

After narrowing favorable snakeskin surfaces to three, the next step in the snakeskin project was to test the surface designs in the lab. The researchers idealized the ventral skin geometries for these three snakes, extruded them onto a flat surface, then printed them using a 3D printer.

“With the snakeskin scans, we realized that many of them had an asymmetrical sawtooth pattern. With the 3D printed surfaces, we exaggerated the snakeskin patterns, making surfaces stronger than the typical surfaces of concrete or steel,” says Martínez. “So, with the snakeskin surface patterns, we can make directionally dependent, stronger surfaces." 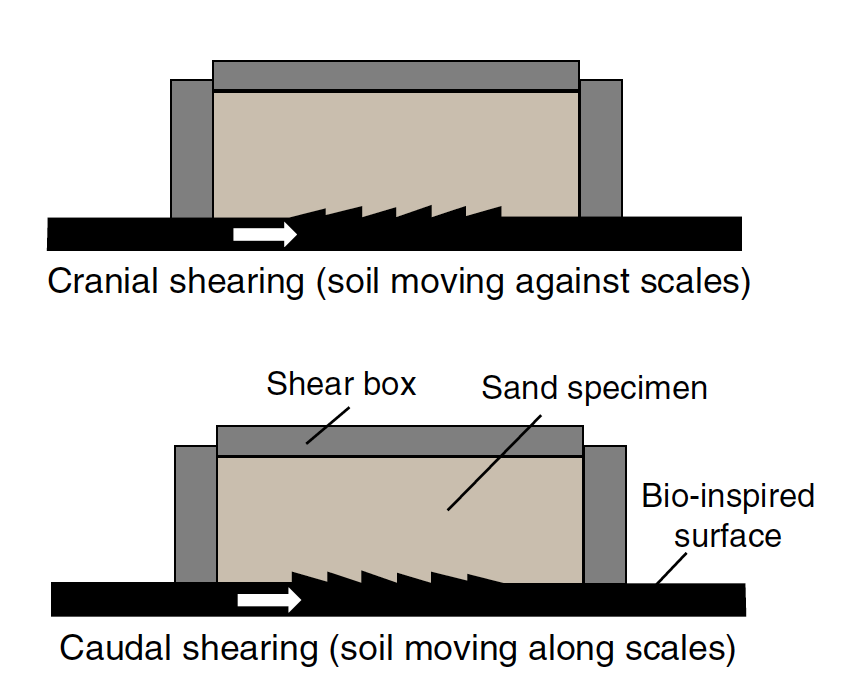 The team conducted interface shear box tests with the snakeskin-inspired surfaces, using sand specimens to understand and assess the frictional behavior of the surfaces. The results confirmed that yes, these new surfaces exhibited a prevalent anisotropic behavior: shearing against the scales mobilized greater friction than shearing along the direction of the scales. They repeated a subset of the tests using particle image velocimetry (PIV) to quantify soil deformations near the interface. These high-resolution images helped the researchers understand the nature of soil deformations at the granular level.

Testing models in the centrifuge

Next, Martínez’s team created model piles with snakeskin-inspired surfaces and conducted a series of load tests using the 9-meter radius centrifuge at the UC Davis Center for Geotechnical Modeling, an apparatus that can simulate g-forces up to 75 times Earth’s gravity. 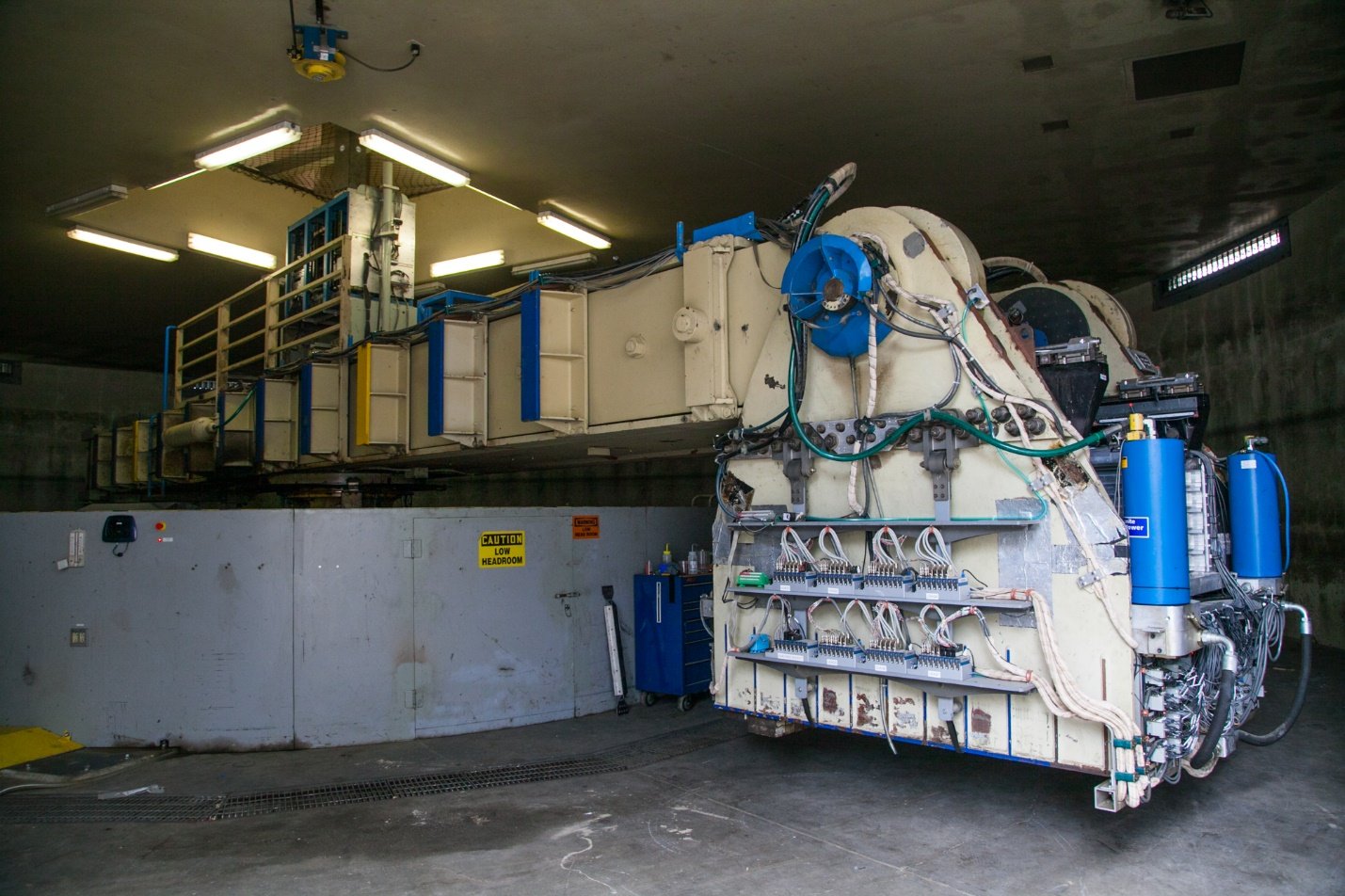 Geotechnical engineers use the powerful acceleration of large-scale centrifuges to artificially increase gravity — and stress — on soils. The centrifuge’s acceleration mimics the high-stress environment of deep soils, creating realistic soil behavior at increasing depths. “Soils are granular materials and their behavior depends on the effective stress,” Martínez explains. “The top meter of soil behaves very differently than soils deeper in the ground.”

Martínez’s model piles, made of stainless steel, were 19mm in diameter and 350mm long; the snakeskin-inspired surface was machined onto the piles. The piles were placed in various densities of sand and spun at 40g in the centrifuge. At 40g — gravity increased by 40 times — the stress under one meter is equivalent to that under 40 meters of soil. 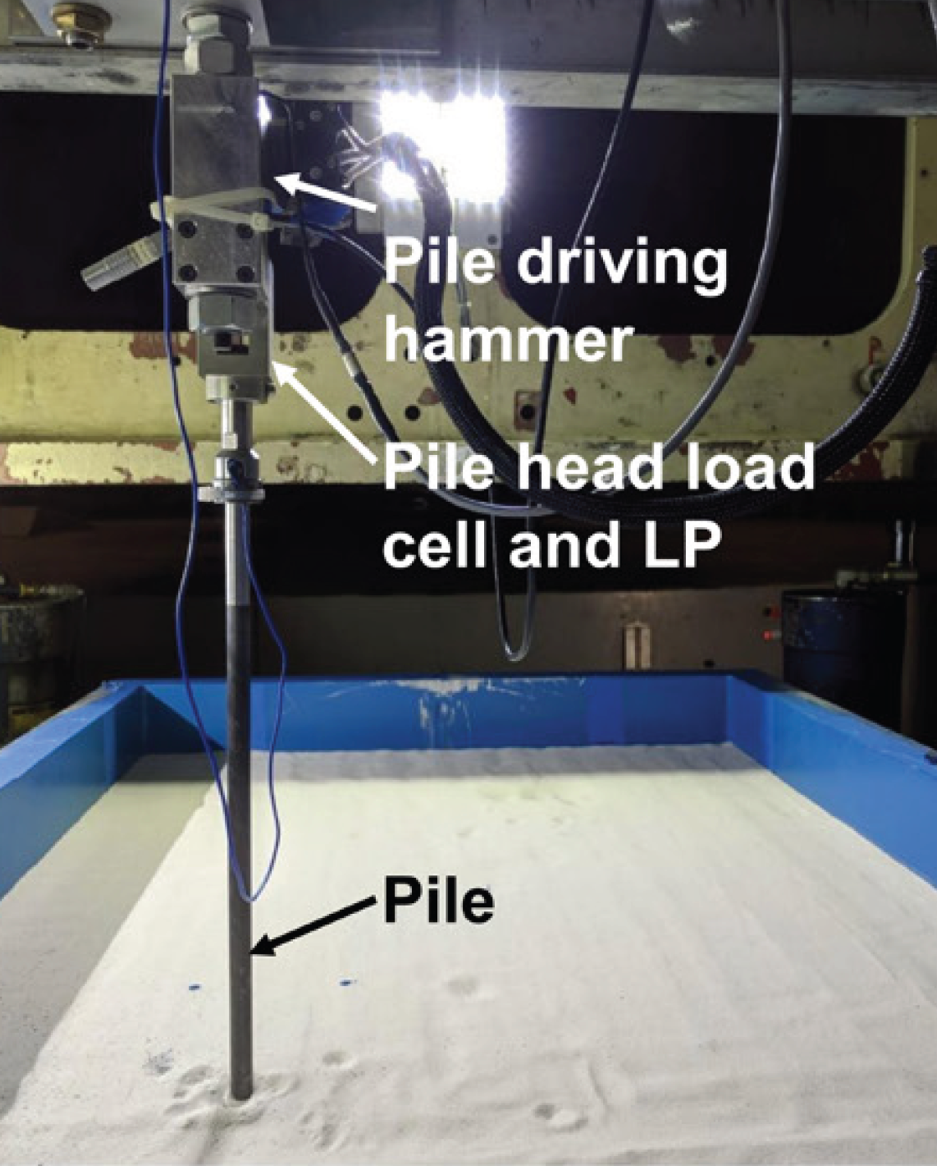 Above: Photograph of pile driving and pullout system in the centrifuge test box. (Image: Alejandro Martínez) 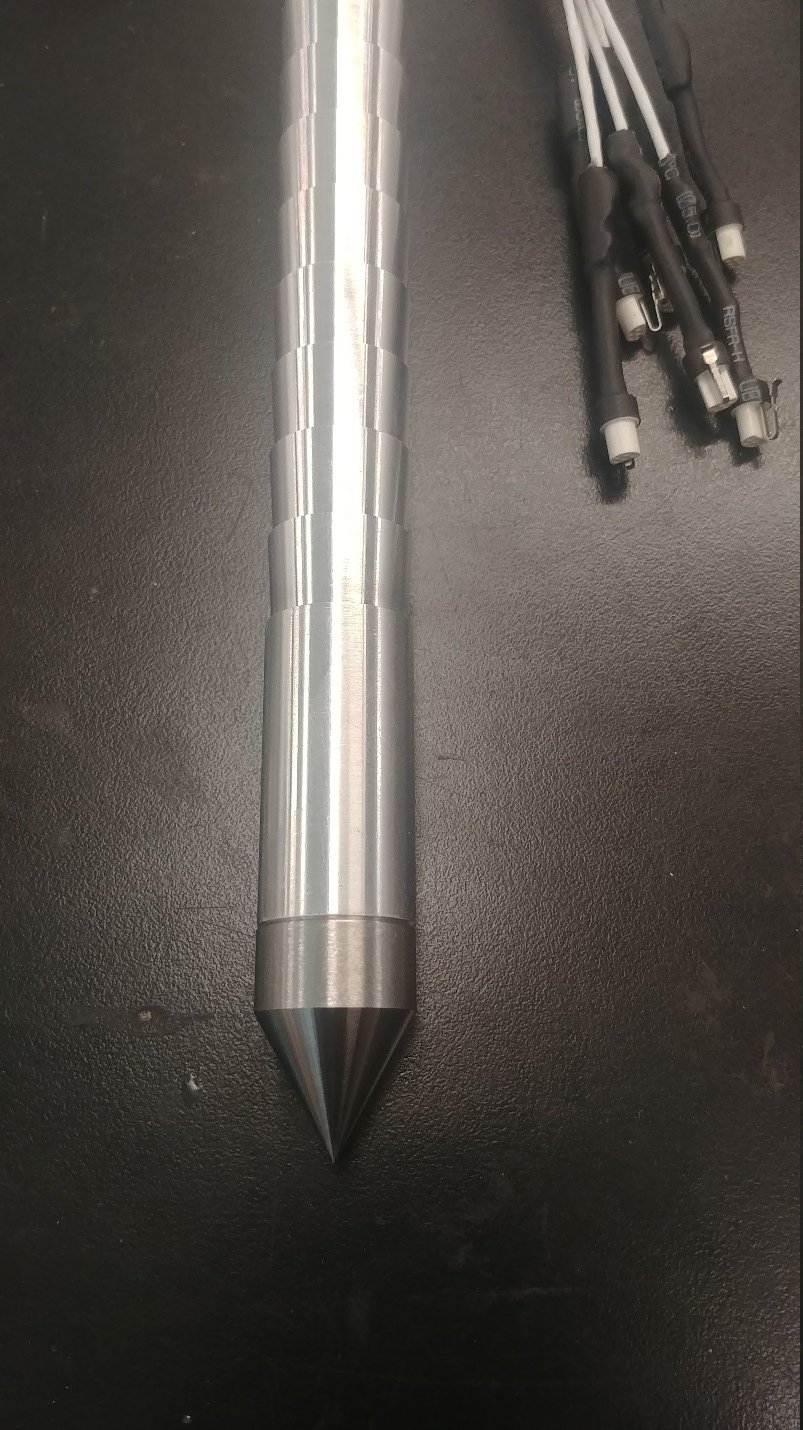 Martínez’s snakeskin research is part of a larger, NSF-funded Engineering Research Center called the Center for Bio-mediated and Bio-inspired Geotechnics. CBBG’s mission is to develop innovative technologies to serve civil engineering industry, and CBBG’s industry board consults with researchers like Martínez, providing insight into the practicalities of their research.

So far, the field test results indicate the snakeskin-inspired soil nails have greater capacities than the conventional ones. Also, the height and length of the asperities affect the nail capacity; however, this effect depends on the soil type. In the future, Martínez hopes to work with practitioners to install snakeskin-inspired soil nails and foundations at industry job sites to investigate their long-term performance.

Bioinspired geotechnical tools are a promising innovation. Looking ahead, Martínez will examine how snakeskin-inspired piles perform in clay soils, and he’ll run field tests on instrumented piles to understand local load-transfer mechanisms. Field tests may confirm what Martínez’s lab and centrifuge tests have shown: that bioinspired piles, soil nails, and anchors are easier to drive in and more difficult to pull out. 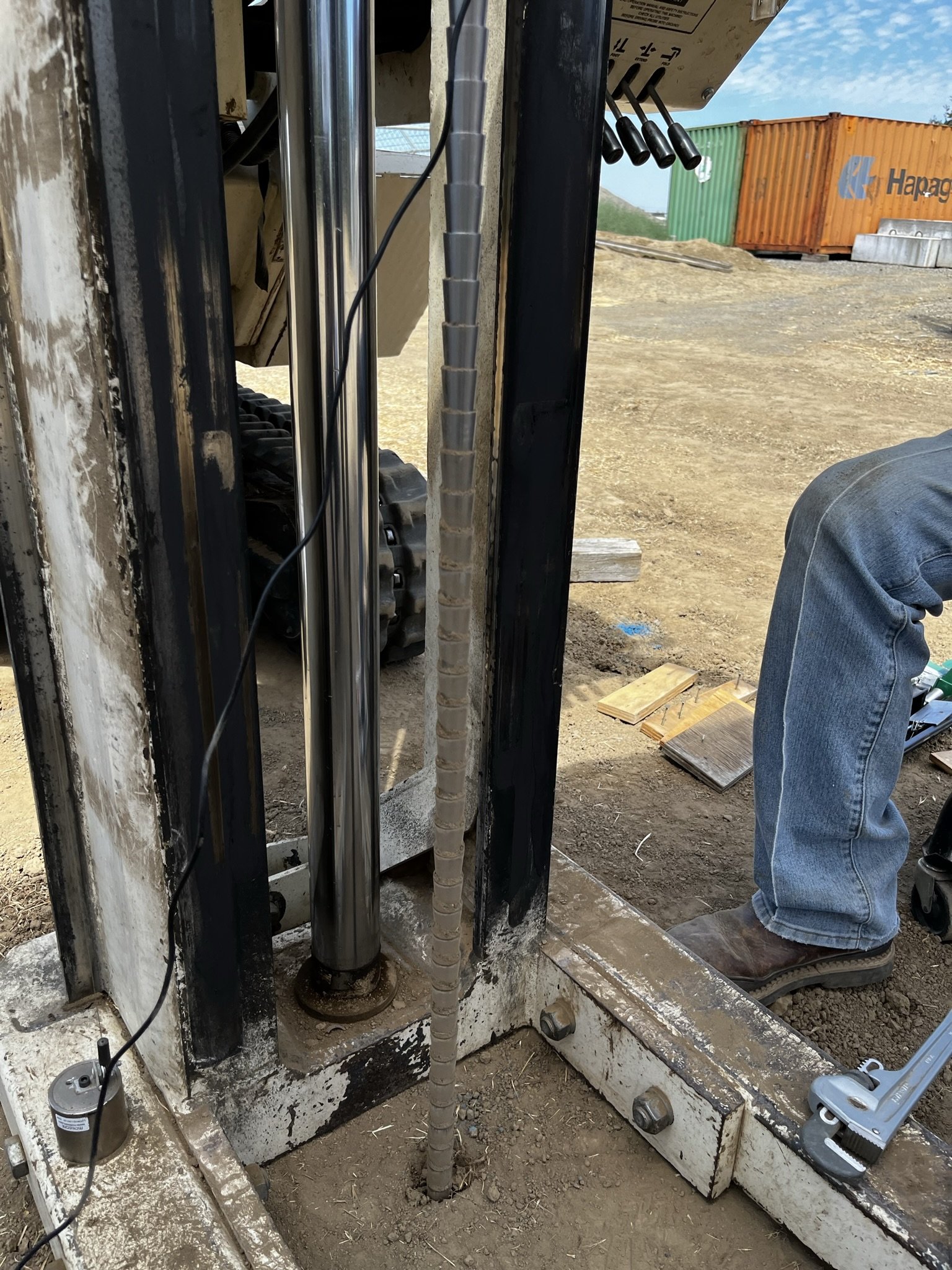 Setup for field test of snakeskin-inspired soil nails. Photo shows a soil nail with an asperity height of 2 mm and length of 12 mm installed in silty soil to a depth of 18 ft. (Image: Alejandro Martínez) 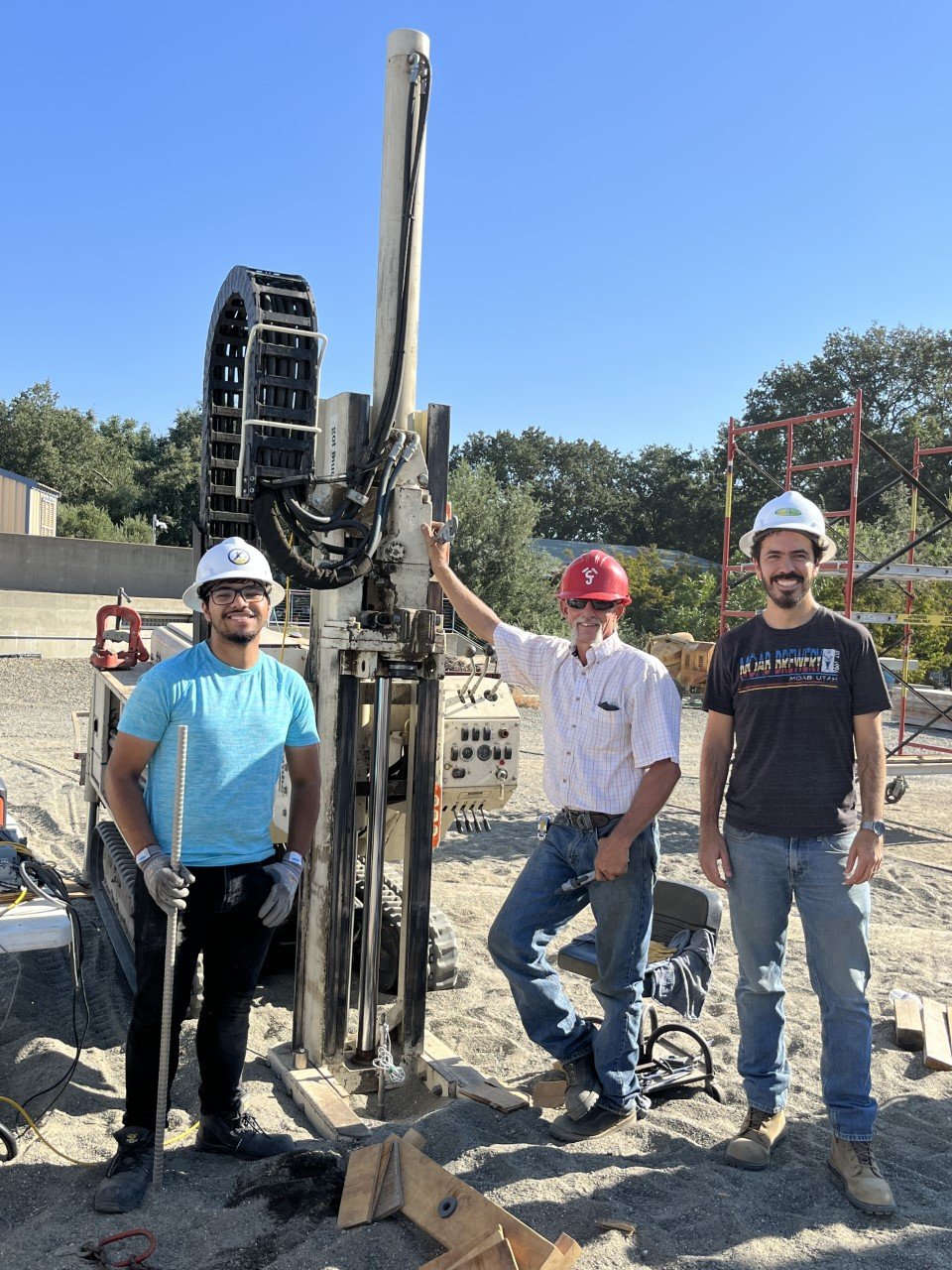