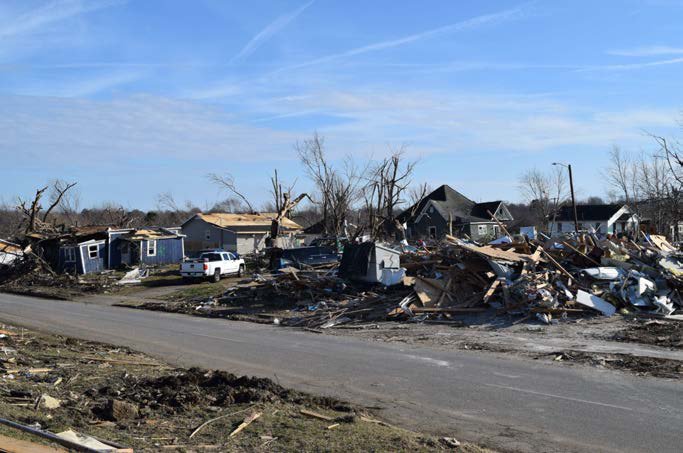 In the late hours of 10 December and into the early hours of 11 December 2021, unseasonably warm air instigated an outbreak of at least 60 confirmed tornadoes across nine states. The outbreak included a family of damaging “Quad-State” tornadoes, with an EF4 tornado that was on the ground for over 160 miles, causing devastating impacts to many small communities and in particular Mayfield, KY. This tornado outbreak is expected to be one of the largest and deadliest tornado events in U.S. history.

Given the historic nature of this outbreak, StEER immediately issued a Level 3 response to this event, simultaneously activating its Virtual Assessment Structural Team (VAST) on 11 December, while its Field Assessment Structural Team (FAST) was assembled to begin collecting perishable data in Mayfield and surrounding areas on 14 December. StEER has released the first product of its response to this event: a joint Preliminary Virtual Reconnaissance Report-Early Access Reconnaissance Report (PVRR-EARR).

Importantly, this joint report underscores the need to design for tornadoes in high-exposure regions, a more realistic proposition given the recent release of ASCE 7-22 and its new tornado load provisions.

The FAST utilized rapid imagery capture methods to document accessible areas in Mayfield and other affected communities in Kentucky using a mixed methodological approach. As detailed in the PVRR-EARR, the collected data can be particularly advantageous in supporting future engineering investigations in the following topical areas:

StEER also notes a number of topics in policy and practice that warrant further attention in the wake of these tornadoes:

While these and other research topics are worthy of additional study, due to StEER’s mandate and the timing of clean-up relative to the approaching holidays, StEER does not anticipate deploying additional on-site FAST teams. The timing of this FAST was too soon to access some areas restricted by local authorities. Thus, StEER is eager to coordinate with other teams who decide to deploy, using RAPID funding or other funding sources, and strongly encourages them to make use of StEER’s archived data and where appropriate, share/coordinate their plans with StEER.

While data enrichment and quality control are ongoing, acquired data can be immediately accessed:

As always, we appreciate your collaboration in helping to Build Resilience through Reconnaissance. Please direct additional queries to admin@steer.network.