We Can Build Homes to Survive Tornadoes Like Kentucky Suffered. We Just Haven't.

David O. Prevatt is a professor of civil engineering at the University of Florida who specializes in wind engineering and how to build and retrofit tornado-resilient residential communities. Prevatt, who serves as Co-PI and Associate Director (Wind Hazards) of the NHERI-affiliated Structural Extreme Events Reconnaissance (StEER) Network, also addresses the topic in a Dec 13 interview on National Public Radio. The essay below originally appeared in the Washington Post, Dec. 27, 2021.

The morning after the destructive Kentucky tornadoes, as the counting of the dead began, I grimly remembered two reports published 50 and 125 years ago by civil engineers describing how to build and mitigate future tornado damage and loss.

The engineering reports followed the Lubbock, Tex., tornado that killed 26 in 1970 and the St. Louis, Mo., tornado that killed 255 in 1896. Both tornadoes destroyed thousands of buildings. The reports outlined in detail how tornadoes cause catastrophic damage to buildings and recommended changes to construction practices to avoid or substantially reduce those losses.

Regrettably, we ignored the recommendations, especially those identified after the Lubbock tornado, and continued to build the disaster of the future one building at a time.

Had we chosen to heed the knowledge gained after these tornadoes, the suffering and loss we are now witnessing in Kentucky would have been largely avoidable. I am heartbroken because we have known what we needed to do for decades.

I am an engineer and researcher who has dedicated my career to learning how to make buildings more resilient against tornadoes and wind. I am part of a network of equally devoted scientists who study major wind events and how we can construct buildings that will stand in the face of natural hazards.

My fellow engineering researchers representing several universities have just returned from conducting damage surveys in Kentucky as part of their work in the National Science Foundation-funded Structural Extreme Events Reconnaissance Network. I have been poring over their reports, and the details are all too familiar. They describe a place that looks like what I’d expect to find at a bomb site: Trees broken midway at the trunks, some twisted around, leaves stripped. Houses and buildings that were near the tornado’s centerline with roofs gone, gable walls fallen outward, garage doors blown in. Most of the furnishings are strewn across yards, and what remains inside homes is soaked. There’s an unnatural quiet, save for the chain saws at work.

For me, the most painful details are the telling structural elements that allowed the wind to cause such havoc. Toe-nailed connections between roof trusses and walls that usually fail at pitifully low wind speeds. Cut nails pounded through wood 2x4 wall plates into concrete slabs that are almost always rusted through at the top of the slab — evidence that these connections failed years earlier and would provide no effective holding-down strength to the houses in the path of a tornado.

It’s painful because the primary aim of our research is to prevent devastation by building tornado-resilient homes and structures that can protect people and withstand most tornadoes. In 1897, following the St. Louis tornado, engineer Julius Baier observed that the degree of structural capacity needed to resist tornadoes would be “neither difficult nor extravagant.”

That is still true today. 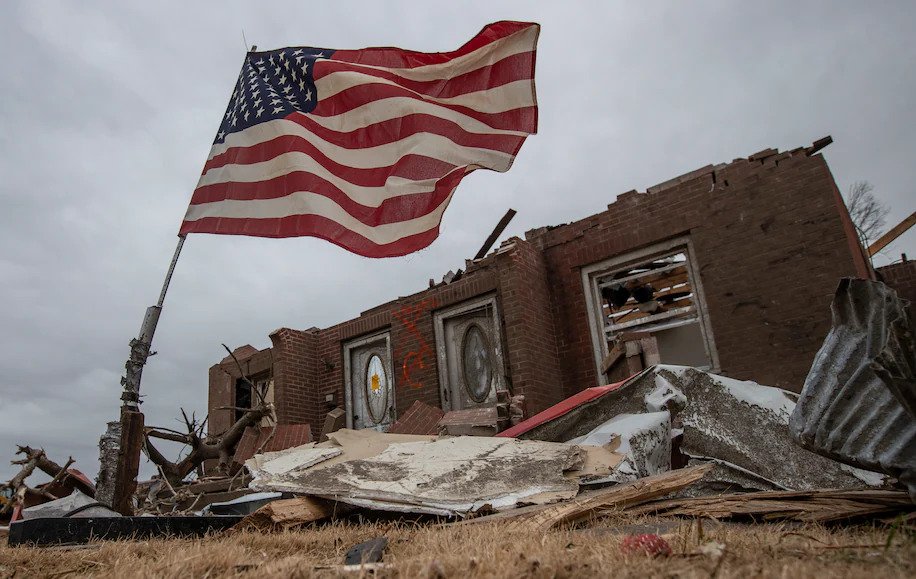 An American flag flies in front of a damaged house in Mayfield, Ky., on Dec. 15. (Austin Anthony for The Washington Post)

We experience more than 1,200 tornadoes every year in the United States, and these wind events kill more people annually than hurricanes and earthquakes combined. From 1950 through 2011, the average deaths per year in tornadoes was 91.6; 50.8 died in hurricanes and 7.5 died in earthquakes. These deaths almost always happen inside buildings.

No one believes all tornado damage can be avoided. But most tornadoes — more than 95 percent — have ground-level wind speeds of 135 miles per hour or less. Researchers from Texas Tech University who conducted the post-tornado surveys in Lubbock stated that while best estimates suggested maximum wind speeds at ground level were 200 miles per hour, most of the damage was caused by winds in the range of 75 to 125 miles per hour.

With better building construction, we can narrow the width of the most catastrophic destruction — the distance away from the tornado’s centerline — so that homes, while possibly experiencing damage, remain occupiable immediately after a tornado.

For a house to withstand wind loads, which pull up against the building’s structure and away from the ground against gravity, they must have strong, continuous lines of mechanical connections that tie every component, from the roof through the walls, down to the foundation.

The structural elements known to be needed include hurricane ties that attach roof trusses to the walls, steel anchor bolts set into concrete foundations to secure wall framing to the ground, and a system of shear walls and bracing to prevent buildings from being pushed over by strong winds.

But traditional single-family homes lack these features, leaving them highly vulnerable to being torn apart. Even today, houses, schools and businesses throughout the Midwest are designed to withstand winds only at the bottom of the tornado-rating scale. 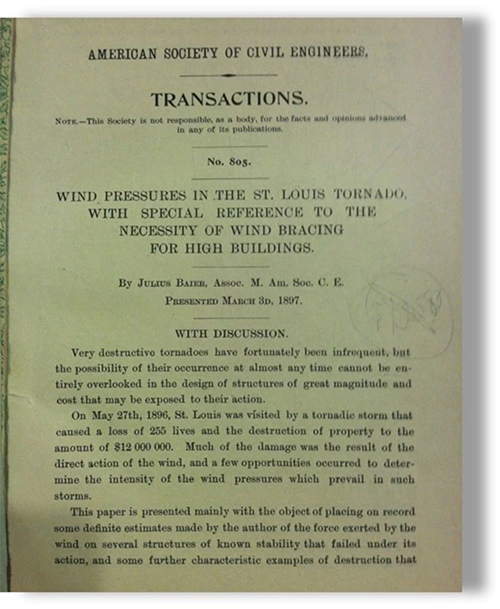 First page of a report prepared after a devastating 1896 tornado in St. Louis that outlined ways to make buildings withstand the storms. (David O. Prevatt/Courtesy of David O. Prevatt)

The Lubbock tornado did lead to advancements over the past 50 years, including the development and application of the Fujita scale, updated in 2007, and it accelerated advances in weather forecasting such as expanded use of the Doppler radar network. Considerable research on tornadoes has, in the aggregate, reduced the loss of life.

But the Texas Tech team’s recommendations to improve building performance were never widely shared with the public, nor accepted by policymakers. The New York Times recently reported on ways the building industry has opposed stricter building guidelines over the years. And so we have continued to build millions of homes the same way we have done since the post-World War II housing boom of the 1950s, resulting in homes that are unable to withstand the wind forces of moderately strong tornadoes.

The engineering research community has not remained idle, however. We have continued to advocate for design standards that will protect lives and lessen damage and destruction from tornadoes, including hardened structural frames, and storm shelters in our homes, schools and businesses.

Over the past decade, the American Society of Civil Engineers (ASCE), the Insurance Institute for Business and Home Safety, and the National Storm Shelter Association have worked to broadly share research about what we can do better — significantly, providing expert testimony to a congressional panel on windstorm damage mitigation efforts. The most recent advancement is the publication of tornado design procedures included in the ASCE 7-22 design load guide.

Now, as the recovery and rebuilding effort gets underway in Kentucky and other states affected by the recent tornadoes, it is time to draw on these resources and this knowledge.

The public also has a role in demanding adoption of updated standards and the retrofitting of buildings. Individual homeowners can research how to strengthen their homes along the lines of what was done in Fairhope, Ala., where fortified homes experienced little to no damage in Hurricane Sally, a Category 2 storm that struck the Gulf Coast of Alabama in 2020.

Before the rebuilding begins in earnest in Kentucky, we have an opportunity for a course correction — to set aside current building standards in favor of tornado-resilient building approaches. Such investments now will benefit these communities in the immediate future and in the lives of their children and grandchildren for decades to come.