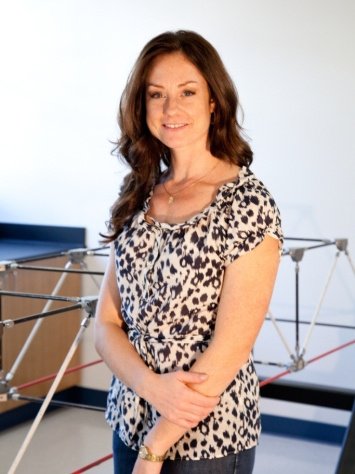 When recalling her initial interest in engineering, she says she enjoyed math and physics in high school, making engineering a natural career path. In college, she majored in civil engineering. A turning point, she says, was when a college job fair unexpectedly landed her a position working as a research assistant for an engineering professor. There, as an undergrad, she learned she liked doing research, and she realized with a PhD she could do research for a living. She briefly describes that early project, which was in wind engineering.

She earned her master’s and PhD at the University of Illinois. During her master’s studies, she worked with Professor Doug Foutch on wind loads on highway sign structures. The team needed to instrument and monitor sign trusses to find out why they were cracking. She loved the practical nature of the work. For her PhD, she worked with Bill Spencer. She learned about structural health monitoring and to design wireless sensors and platforms for collecting data.

She describes the kinds of data that are important to collect, including vibration based acceleration data. She describes how structures, because they have inherent dynamic properties, can be monitored to detect damage. She discusses the state of “health monitoring” research and explains one of the more practical uses of the approach, which is to monitor structures with known deficiencies.

Bridges talks about a project she’s wrapping up, using UAVs to do bridge inspection – which is a visual way to examine structural health. She explains how much of the work involves advanced image processing, which can be used for decision support. UAV flight control is trickier that you’d think, she says, so her team devised a variety of techniques to take photographs in a consistent fashion. She discusses the value of machine in processing images.

She briefly discusses University of Florida projects that use the NHERI wind tunnel facility to devise real-time structural optimization techniques, which allow engineers to design a structure while it is experiencing a wind load.

Bridge talks about her current project: in-field, full-scale bridge testing under coastal storm loading. She measures forces that bridges experience during storms. There are good models, she says, but there is not much real data. You can look at damaged bridges, but researchers still don’t know how damage happens. Bridge is aiming to get the info to fill the gap. It means developing the proper instrumentation, a sensor kit that’s fast to set up and strong enough to hold up during a storm – and endure underwater fouling. With NSF and Florida Department of Transportation support, she’s developing an instrumentation system for coastal bridges. She’s hoping for a robust and practical system that works in the real world.

Bridge has a prototype system on a Tampa Bay bridge, and she’s hoping to instrument as many as 10 Florida bridges commonly in the paths of storms and hurricanes.