June 14, 2018 — For earthquake engineer Kara Peterman, joining the high school robotics team was a defining experience. She discovered she loved the applied sciences. So when she entered Swarthmore College, she majored in engineering. Because she loved buildings and architecture, and she liked the idea of designing resilient structures, she decided to focus on structural engineering. 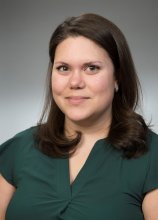 Today, Peterman is an assistant professor of engineering at the University of Massachusetts, Amherst.

After earning her undergraduate degree, she wanted to be a professional engineer, so she enrolled in the master’s program at Johns Hopkins University. She discovered she loved research, so she switched to the PhD program. She didn’t want to give up on the idea of a being a PE, but research was too important, she says. At Johns Hopkins, she learned that she loved experiments. She found the unknown compelling. Research is like a mystery, she says. You work until you have enough clues to solve the problem.

As a PhD candidate, her advisor was Ben Schafer, who introduced her to shake table testing. Currently she’s working with him as a colleague, along with Professor Tara Hutchinson of UC San Diego, on an industry-supported shake test at the LH POST facility at UC San Diego.

The team is developing the shake experiment with the American Iron and Steel Institute. Peterman describes the cold-formed steel project, which involves multiple components, including testing of isolated diaphragms, a fancy term for floor or roof.

Peterman discusses preparations for the November and December 2018 shake tests which will include performance testing of diaphragms. Another part of the test is discovering the effects of earthquake acceleration. The team will be looking capture deformations, captured by displacement sensors.

Peterman details what is involved in planning for a major shake table test. On this test, the team is getting input from industry as well as from research engineers. They can’t test everything, she says, so the team puts together a short list of tests. Next, they will design the specimens, balancing theoretical versus practical building designs. Then, the team will order materials and build the specimen.

When it comes to lessons learned as an early career engineer, Peterman recommends an article called The importance of stupidity in academic research from the blog Sh*t Academics Say. The article recommends researchers be at ease with the fact that there is a lot they don’t know. There is no room for ego in research, she says. If you want to trust your work, you need to validate it.

As for bad advice, Peterman hearkens back to her days on the high school robotics team when the advisor told her, “do what you’re good at” and assigned her to a task she was familiar with: writing — when she wanted to build robots. If you only do what you are good at, she says, how can you explore and learn? At first, she was not good at engineering. But, she says, things worth having are worth working for.

She says it took her years to cultivate confidence in her work. In the lab, everyone competes for resources. So even if you lack confidence, she says, you need to put yourself out there and say, “I need this, I need you to do this.” It is often easier to let the seemingly more confident people take precedence, she says, but young researchers need to be more assertive. You are not being “bossy.” You just need to make sure your work gets priority.

Look forward to learning more about Peterman’s research at the NHERI-DesignSafe website. Meanwhile, read Peterman’s 2013 CFS-NEES blog about the experience of shake-testing cold-formed steel structures, which also appeared as in encapsulated form on Live Science.