While the U.S. was experiencing the impact of Hurricane Florence in the Carolinas, the Philippines, Hong Kong and Shenzhen, China, were enduring Typhoon Mangkhut, perhaps the strongest of all land falling tropical storms in 2018. After virtually following the damage and the typhoon wind characteristics in the aftermath of Typhoon Mangkhut, I can safely state that the damage in the Philippines bears some resemblance to what has been experienced in Carolinas. However, Hong Kong and Shenzhen present a totally different perspective. Both are dense urban clusters of sprawling tall buildings, some of which are super tall and hold a distinctive height among the world’s tallest.

Tall buildings were swaying and in some cases window panes were being dislodged from the cladding and falling and tumbling glass panels were ricocheting from one surface to another, causing a cascade of glass breakage. This brought back memories of prior hurricanes and typhoons that inflicted glass damage, some obviously due to debris impact, some due to built versus design discrepancies, lack of typhoon-resistant construction in some cases, and in other cases, perhaps the pressure experienced by those regions of the cladding exceeded the design (The picture at left illustrates a consequence of these scenarios). This is a reminder that glass-clad towers may be vulnerable to such damage that has been previously observed, for example, in Houston, Texas, during Hurricanes Alicia and Ike, in New Orleans in Hurricane Katrina and Typhoon York in Hong Kong. I myself was involved in investigating the anatomy of these major glass damage events which result from, in part, the possible scenarios alluded to above.

One advantage we have in this case is that several buildings in Hong Kong and China are not only instrumented with accelerometers, but also GPS, and a host of other sensors, including towers with multi-level anemometers, sonars, etc. I have learned that the data has been collected in most of these. One installation in a skyscraper in Shenzhen that I was monitoring collaboratively lost power and sadly the backup power supply also malfunctioned — proving again Murphy’s Law. 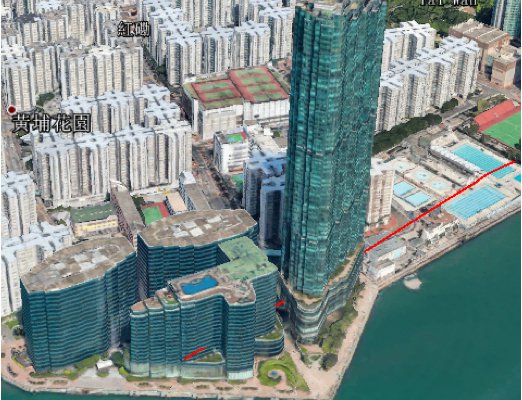 In this image, the red outline shows the above building with glass damage with respect to its surroundings.

Data from other locations will offer structural engineers information concerning the structure of typhoons both spatially and temporally, as well as information about the behavior of tall buildings for validating wind tunnel studies and computational models. The NatHaz Modeling Laboratory has collaborations with a number of universities and agencies in China and is engaged with them so as to better understand the structure of typhoon winds and their vertical profile and the performance of the tall structures under extreme wind conditions.

As a Mangkhut stormwatcher, I observed plenty of damage. In brief, several tall buildings experienced motion that was captured by home videos, and several cladding and glass panels were noted being blown away. Construction cranes were dangling, and one ultimately collapsed. Water was sloshing and running over the sides of the pool.

Considerable inland flooding was also prevalent in Hong Kong and Shenzhen. In part that can be attributed to over-building, elimination of natural drainage type grassy surfaces, and clogged or under-designed storm sewers.

We are very much looking forward to sorting out several questions including a key one: Is it the severity of the storm or “Expanding Bull’s-Eye Effect” resulting from the expansion of the vulnerability exposure to these storms that are causing disproportionate damage? Or is it perhaps a lack of consistent typhoon resistant construction practices?