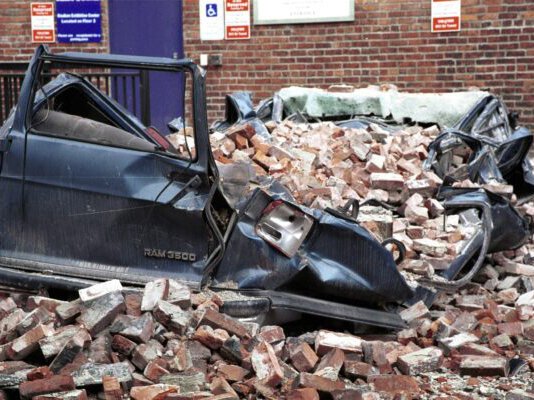 A large van crushed by earthquake debris in a Seattle parking lot in 2001. Kevin Galvin, Public domain via Wikiemdia Commons.

AUSTIN, TX, Nov. 12, 2020 — In Seattle, "the big one" — a massive earthquake that could devastate the region — represents an ominous threat. So widespread are the concerns that city leaders there created standards to fortify new skyscrapers using data from studies forecasting the impact of a big earthquake in the region.

The Seattle mega-quake scenario is one of hundreds of data sets published on DesignSafe, a database for natural disaster information created by researchers at The University of Texas at Austin that has changed how planners, builders, policymakers and engineers prepare for and respond to hurricanes, tornadoes, earthquakes and more. The data repository gives researchers the ability to formally publish data sets related to natural disaster studies in the same way research papers are published in journals, giving them an accessible digital home.

"We've watched the path from research to data to the real world, where information on the platform is informing how people do things like design structures," said Ellen Rathje, a professor in the Cockrell School of Engineering's Department of Civil, Architectural and Environmental Engineering, who is the lead researcher for DesignSafe. "Our data repository is helping paint a more complete picture of natural hazards and helping the world understand their impacts."

The 5-year-old project, funded by the National Science Foundation, has been renewed with a $15.5 million grant for another five years. DesignSafe is a collaboration between the Cockrell School and UT's Texas Advanced Computing Center and includes faculty members from Rice University, the University of California at Los Angeles and the Florida Institute of Technology.

DesignSafe has more than 5,000 users, and it currently features 293 published data sets, representing more than 34TB of publicly available information. Hundreds more data sets are stored privately, and many of them will ultimately be made public. Researchers have uploaded data documenting the damage from more than 50 major disasters.

Rathje, who specializes in earthquake research, said the landscape around natural disaster analysis has changed significantly since DesignSafe launched five years ago. In the past, visual data for damage was often restricted to photos taken by researchers in the field. Now, geotagged photos, street-view imaging and drones able to capture 3D videos have led to a massive increase in the amount of data available to researchers.

All this extra data gives greater insight into how buildings can be strengthened to withstand natural disasters. Legislators get a clearer picture of where response is lacking and how they can improve it. And engineers can better quantify damage as they create models to aid in planning and preparation for future disasters.

In another use case, the Houston Ship Channel is home to thousands of above-ground storage tanks that are important for petrochemical storage. These valuable storage tanks are at risk of damage and spills during hurricanes, but organizations such as the U.S. Army Corps of Engineers did not consider these factors in planning for major coastal protection infrastructure projects.

That has changed due to data published on DesignSafe. Engineers from UT Austin, Rice University and Oregon State University published data showing the risk of damage to petrochemical storage tanks in the Houston area due to hurricanes. They shared it with the Army Corps of Engineers, and the organization has since implemented the data into its planning process for major infrastructure projects.

"Accounting for damage to these storage tanks is critical in coastal industrial regions, like the Houston-Galveston area, where the risk is high, and cascading consequences are significant," said Jamie Padgett, a professor in the Department of Civil and Environmental Engineering at Rice.

To learn more about DesignSafe and explore its library of published data sets, visit designsafe-ci.org. DesignSafe is supported by NSF Award #1520817.

The Natural Hazards Engineering Research Infrastructure, NHERI, is an 11-node network of shared-use experimental facilities and centers. NHERI researchers are dedicated to reducing damage and loss-of-life due to natural hazards such as earthquakes, windstorms, tsunamis and storm surge. NHERI’s DesignSafe Cyberinfrastructure provides the engineering and social science communities with state-of-the-art computing resources needed to meet the research challenges of the 21st century. NHERI is supported by multiple grants from the National Science Foundation, including the Network Coordination Office, #1612144, and the DesignSafe-CI, #1520817.

About the National Science Foundation

The U.S. National Science Foundation propels the nation forward by advancing fundamental research in all fields of science and engineering. NSF supports research and people by providing facilities, instruments and funding to support their ingenuity and sustain the U.S. as a global leader in research and innovation. With a fiscal year 2020 budget of $8.3 billion, NSF funds reach all 50 states through grants to nearly 2,000 colleges, universities and institutions. Each year, NSF receives more than 40,000 competitive proposals and makes about 11,000 new awards. Those awards include support for cooperative research with industry, Arctic and Antarctic research and operations, and U.S. participation in international scientific efforts.