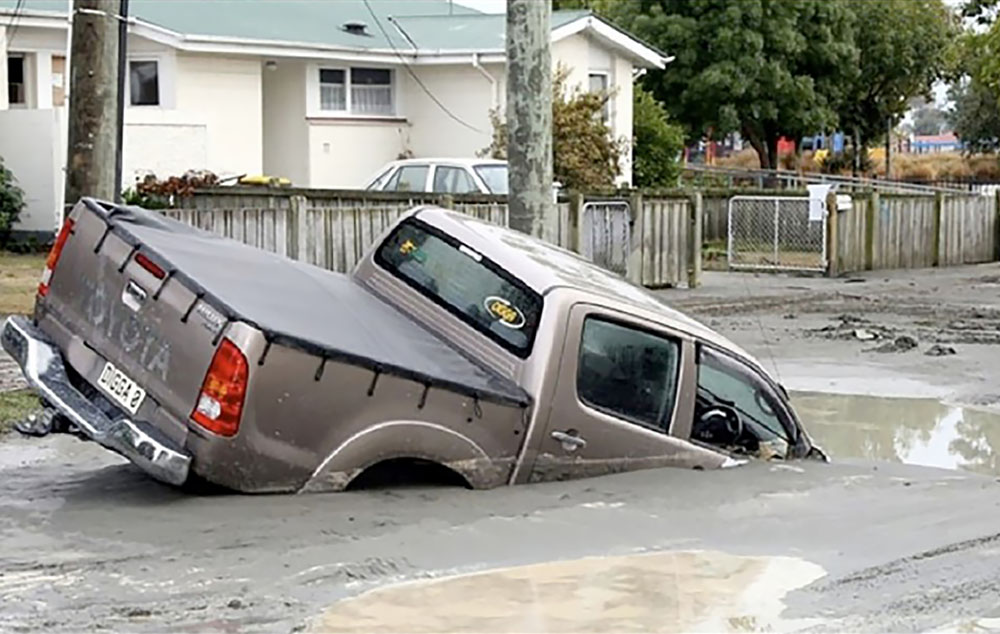 Soil liquefaction is a ground response during earthquakes in which the ground turns from solid into a fluid medium similar to quicksand and detrimental to structures. The 2010 Canterbury earthquake sequence caused $3 billion in damage to buildings and infrastructure on the South Island of New Zealand, particularly in the city of Christchurch, and much of that from soil liquefaction. A massive dataset of 15,000 liquefaction case histories from the sequence won a 2021 DesignSafe Dataset Award. Credit: Brett Maurer, University of Washington.

During an earthquake, solid ground can loosen into something like quicksand.

Under earthquake shaking some types of soil undergo liquefaction, a softening caused by groundwater pressure that becomes an evil twin to ground shaking. Liquefaction causes large ground deformations that have toppled buildings large and small, as well as crushed pipes below and taken out roads, rail, bridges, and levees. 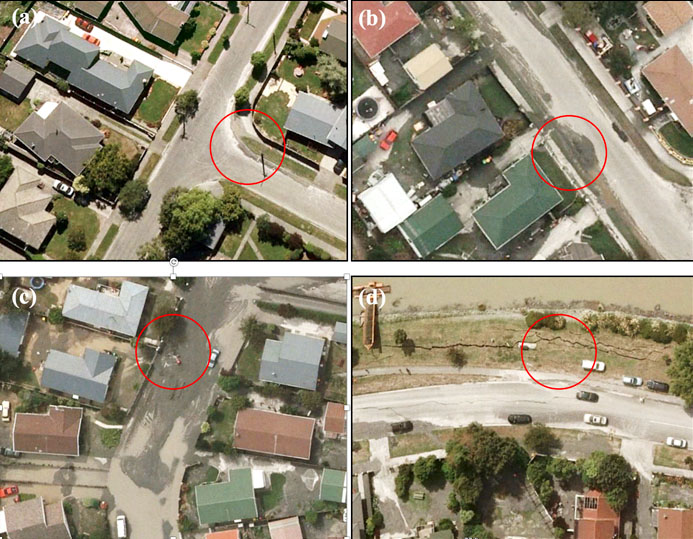 Representative observations of four liquefaction manifestation severity classes, as described in the data paper: (a) marginal; (b) moderate; (c) severe; and (d) severe lateral spreading. Classifications are based on a circular sample area, centered on each CPT, with approximate radius of 10 m.

Such was the case for the 2010 Canterbury earthquake sequence, the most damaging being the magnitude 6.2 Christchurch earthquake. The sequence of earthquakes, 21 of which were greater than magnitude 5, caused $3 billion in damage to buildings and infrastructure on the South Island of New Zealand, particularly in the city of Christchurch, which would receive the brunt of the deadlier aftershocks a year later.

In 2021, scientists completed a massive collection of earthquake liquefaction data from the three biggest 2010-2016 Canterbury earthquakes.

The dataset, which includes over 15,000 liquefaction case histories, was made publicly available on the NHERI DesignSafe cyberinfrastructure. A corresponding data paper was published March 2021 in the journal Earthquake Spectra.

The authors of the earthquake liquefaction dataset were awarded a 2021 DesignSafe Dataset Award, given in recognition to the dataset's diverse contributions to natural hazards research.

This specific dataset documents the ground deformation effects of liquefaction on structures in the Canterbury region of New Zealand. Ground reconnaissance and remote sensing captured observations of the occurrence and severity of liquefaction across the region. Cone penetration testing (CPT), which basically pushes a cone into the ground to understand ground resistance and soil density, was performed, as well as groundwater monitoring. 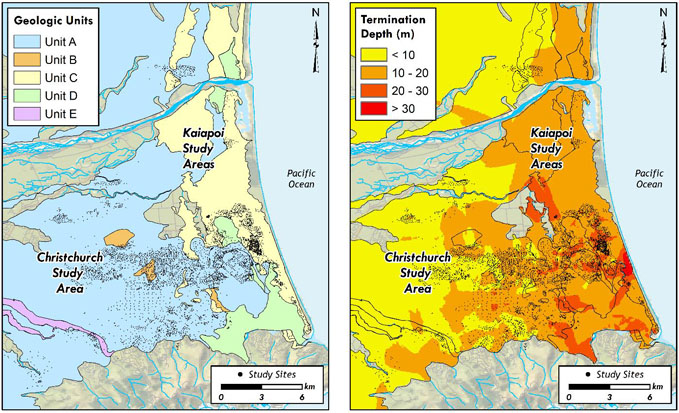 What’s remarkable is that prior to the Canterbury liquefaction dataset, only about 250 case histories existed from all other global earthquakes combined.

“This dataset considerably augments the data available for model training and testing by at least a factor of 50, presenting the profession with a unique opportunity to advance the science of liquefaction prediction,” said co-author Brett Maurer.

Liquefaction prediction is important in efforts to rebuild and to help provide the best engineering solutions in the aftermath of an earthquake.

“DesignSafe provides a prominent and visible platform for communicating and disseminating important data,” Maurer explained. “Our datasets are provided in both Matlab and Python formats, so users can directly work with the data (e.g., to construct models) without leaving the DesignSafe platform.”

The post-processed data is presented in a single file as a structure array that allows researchers to readily access and analyze a wealth of information pertinent to free-field liquefaction response.

Scientists’ computer models that predict liquefaction must be trained and tested on real data. The case histories represent sites where the liquefaction response was observed after the earthquake; where ground motions were recorded or can be reasonably approximated, and where in-situ geotechnical testing was performed to characterize the capacity to resist liquefaction.

The life-cycle of the data begins when an earthquake occurs, during which ground motions are recorded across the affected region. Immediately after, ground reconnaissance and remote sensing capture observations of the occurrence and severity of liquefaction across the region. In the months and years that follow, CPT and groundwater monitoring are performed. 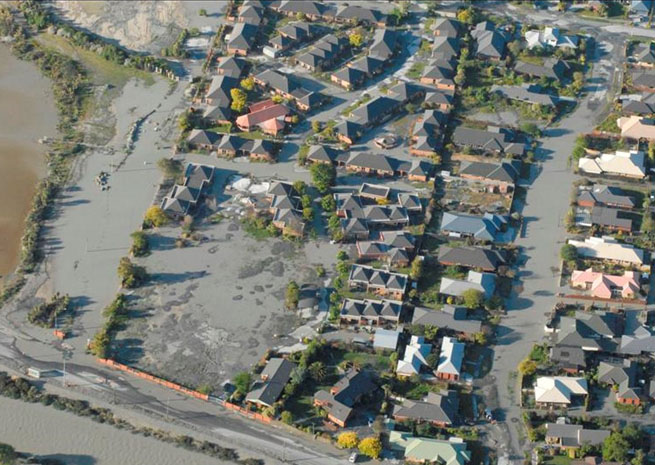 Liquefaction only needs a few seconds to develop, but its effects are long-lasting. Sandy soils, silt, and gravel get separated with groundwater from a large earthquake, resulting in large ground deformations and effects. Liquefaction prediction is important in efforts to rebuild and to help provide the best engineering solutions in the aftermath of an earthquake. Credit: Brett Maurer, University of Washington.

“The data curation and processing took years of effort," Maurer said. "None of this would have been possible, however, without the hundreds of people who worked to obtain the data in the first place (i.e., CPT testing, satellite imagery, groundwater modelling, etc.) as part of a massive effort funded by the New Zealand government. Relative to that effort, our work to compile and publish the data was trivial.”

Ultimately, everyone in society benefits from improved hazard assessments.

“In many earthquakes, soil liquefaction causes tremendous damage and loss, as evidenced by the Canterbury, New Zealand, earthquakes, where large portions of the city were damaged beyond repair and turned to greenspace," Maurer said. "When someone builds a road, bridge, home, etc., the building codes require that the liquefaction hazard be assessed. We all want those assessments to be accurate.”

“Data is everything in life. It's how we make decisions about every move we make. Without earthquake data, we don't know if our current hazard prediction models work and we have no way to make better predictions in the future," Maurer concluded.

Funding for the dataset was provided by the National Science Foundation (NSF), US Geological Survey (USGS), and Pacific Earthquake Engineering Research Center (PEER) under Grants CMMI-1751216, CMMI-1825189, CMMI-1937984, G18AP-00006, and 1132-NCTRBM, respectively. The work was also supported by QuakeCoRE, the New Zealand Centre for Earthquake Resilience. Above all, the authors acknowledge the countless people who contributed to the liquefaction case-history data collection, which was collected under the auspices the New Zealand Earthquake Commission (EQC).