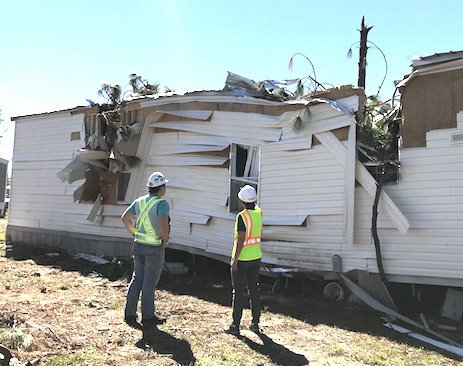 NSF-funded research by Elaina Sutley, associate professor of civil, environmental and architectural engineering at the University of Kansas, was incorporated into the newest version of ASCE 7, the loads standard for structural engineering adopted by building codes and used throughout the United States.

Among other things, the new provisions define an elevated building and provide direction for calculating the wind loads for elevated-building supporting elements and the loads for the bottom surface of the elevated building. These specifications come directly from Sutley’s NSF-funded NHERI project, RAPID: Assessing the Performance of Elevated Wood Buildings, including Manufactured Housing, in Florida during 2018 Hurricane Michael.

Sutley’s team coupled its field work with experimental work that took place at Florida International University, a NHERI experimental facility. Arindam Chowdhury, FIU principal investigator, contributed significantly to the effort. “Arindam was a major reason we had sufficient data that could be translated into design provisions,” Sutley notes. The team’s resulting paper, “Observations and analysis of wind pressures on the floor underside of elevated buildings,” was published in the October 2020 issue of Engineering Structures. Along with Sutley, authors included Jae H. Kim, Mohammadtaghi Moravej, Arindam Chowdhury, and the RAPID project co-PI, Thang N. Dao.

We recently sat down with Sutley to learn about the process of getting fundamental research adopted into ASCE 7.

Q: Did you have the goal or a plan for getting your research included into the wind load specification?

Sutley: When we started the project, we were trying to fill gaps in knowledge. There were fundamental gaps about the behavior of elevated structures, and then there were practical gaps in knowledge, too. There were no code provisions on the wind pressure coefficients on the underside floor surfaces. Plus, we’d seen in the field that there were issues.

For instance, the cladding on the underside of the floor surface just rips off during a big wind event. Once that gets ripped off, the floor gets exposed to the elements. As for cladding, different homes have different qualities of siding, some of it is structural, some not. So, it gets ripped off at differing wind speeds — and then your home is exposed and can allow water damage and all types of things.

We wanted fundamental knowledge about wind and structural behavior as well as practical knowledge needed for resilient design. 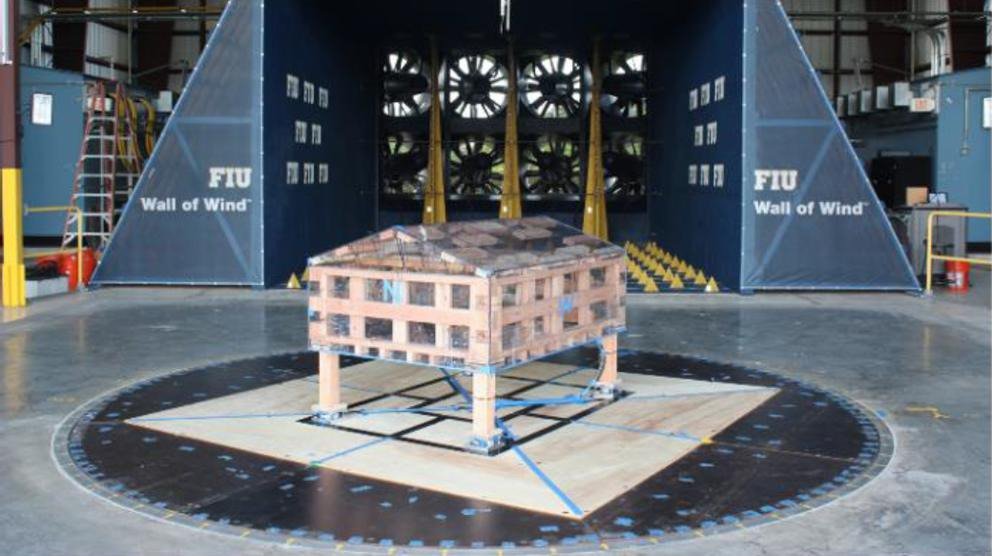 Q: How did the inclusion of your research into the ASCE 7 transpire?

Sutley: I was a member of the ASCE 7 wind loads subcommittee. I thought it would be a good learning opportunity. So, it was happenstance. The first time the wind load subcommittee met, in person in Reston, Virginia, the committee chair asked the group: What are the things you’d like to see changed in this cycle?

I was thinking: ‘elevated structures.’ But I was nervous about speaking up. There were 120-something people in the room, most of them practicing engineers, and I was an early assistant professor at the time. But I was sitting with Ioannis Zizis, a colleague from FIU, and he encouraged me. So I raised my hand and made the suggestion. And to my surprise, the committee decided elevated structures needed to be in the chapters on components and cladding and on main wind-force resisting system.

Over the course of that ASCE 7 cycle, I served as the balloteer. This meant that I processed every single proposal, every single ballot that went through to make changes to the wind load provisions. So, thanks to my leg-work on the committee, I became very familiar with change proposals, and what they looked like.

Tim Reinhold was the chair of the task group. He and I interacted frequently over the course of the cycle and built a good working relationship. Time passed. Three years after that first meeting in Virginia, as we neared the end of the cycle, Tim asked me if I was ready to work on the elevated structures proposal.

At that point, our research team on the RAPID project had just finalized our journal paper on the topic. So it was really good timing. And that publication timeframe was a big reason why I hadn’t written a change proposal on elevated structures earlier.

Tim wrote the change proposal, largely. I shared our paper with him, and he used it to draft the changes for the main wind-force resisting system (27.3.1.1) and the components and cladding (30.3.2.1 and 30.4.2.1). He drafted the initial proposal, sent it to me, and we did some back and forth. He’s an expert wind engineer and an expert ASCE 7 committee member. He was really comfortable and familiar with writing code provisions, standard provisions. So I was, and am, really grateful for his help.

The committee voted. It was one of the last proposals to go through. It was in the last ballot. Tim made a huge difference. It was awesome.

Even though it took several years, the incorporation of our research into the ASCE 7 was still really fast. We were studying Hurricane Michael, which happened in 2018, and our work appeared in the 2022 provisions. That’s super-fast.

Ultimately, the two important factors were that I was a member of the ASCE committee and also that I built a relationship with someone with a lot of experience on the committee — someone who was willing to mentor me. And that made all the difference.

Q: What advice do you have for researchers looking to get their work included in a specification? Or otherwise considered by practicing engineers.

Sutley: Everybody has different goals and prerogatives. But for me, I really want to see differences happen. That’s what motivated me to pursue a PhD. It’s what motivated me to study natural hazards, like the catastrophic tornado that hit Tuscaloosa, Alabama, back in 2011. So when I became a faculty member, I asked my mentors: what do you do to make changes happen? The answer was: join committees. You have to make relationships, at least with practitioners, to see changes happen. And in my case, if you can help write the change proposal yourself, even better.

I found that joining ASCE 7 is doable with my academic workload. As a member, just learning about the codes and standards process has been tremendous. You get an understanding about what a change proposal is, how the voting works, all of that. I hope to be on the wind load subcommittee next cycle, too. Now I know how the process works — how to submit ideas for a change proposal, how to communicate with the task group chair, and how to write a proposal. Being familiar with that process is a huge advantage.

Many of our standards that are adopted by building codes – legal documents, follow the same ANSI process for balloting and voting. So once you become familiar with the process, it’s pretty similar across codes and standards.

You also have to have the time for it. University of Kansas is thrilled about its faculty doing impactful research. But “research-to-practice” is not a metric that gets used. It’s hard for faculty. We are stretched. I do get credit for being on the ASCE committee. But I would get the same credit for being on a committee that required less of my time.

Lastly, it’s important just to share that your research exists — and to connect your work to code provisions or standard provisions. So don’t leave your analysis and findings in the fundamental stage. Have a section in your journal paper that shows what your work could mean in practice, or what it would mean if it were adopted in a standard. That can go a long way too. 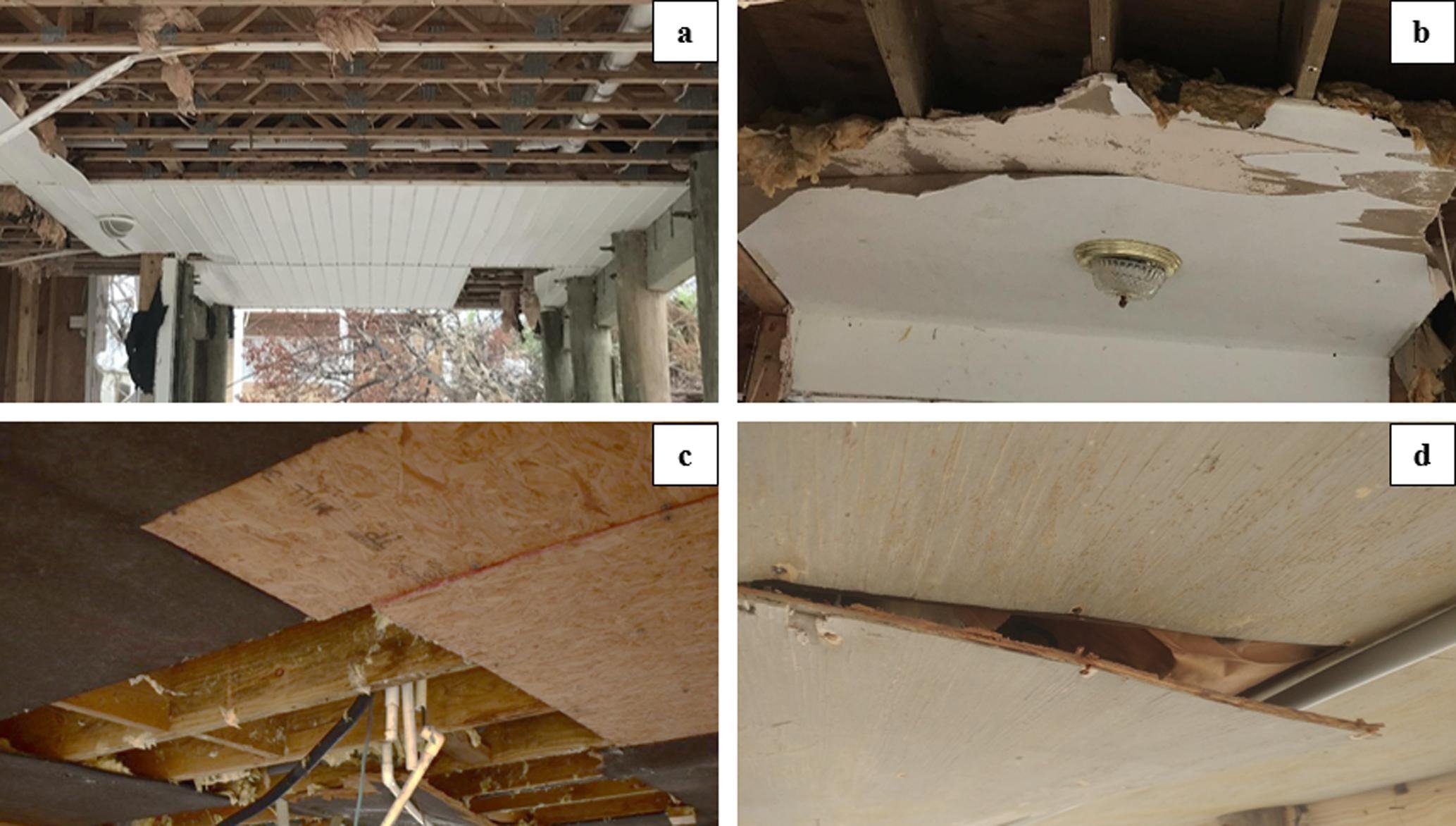 Sutley Research Group at the University of Kansas