"The Flap" in action. (Source: @LomonacoPedro)

Called “the Flap” for short, the new device generates waves up to 60 cm height, at a wave period of 3 seconds, in depths up to 4 meters. The new equipment has coastal engineering researchers interested! Already, an NSF proposal requesting its use has been submitted.

Facility co-PI Pedro Lomonaco explains that the device is formed by six independent paddles hinged at the base to produce a so-called flap motion, which replicates closely the vertical velocity profile of deep-water waves.

“The system can be placed at any location along the Large Wave Flume and also at varying depths — from 1.5 m to 4 m,” Lomonaco says. A series of panels are placed underneath to separate the flow and improve the quality of the waves produced. The paddles are dry-back, with no water behind the paddles, he explains. The wave machine is a watertight steel box containing the paddles and actuation system — allowing the use of force control for active wave absorption compensation.

The new system is compatible with the generation of currents in the flume and if used in combination with the existing wave maker as an active absorber, it increases the available testing space by 80%.

The system fabricator, Edinburgh Designs, recently installed and commissioned the machine. Over the winter, the OSU facility team will be performing a series of experiments to characterize the system’s capabilities for future testing.

Although the new equipment was funded primarily by a grant from the Department of Energy and other sources, the OH Hinsdale Wave Research Lab, also an NSF facility, will enable projects funded by other sources to use the new wave maker, including NHERI projects. 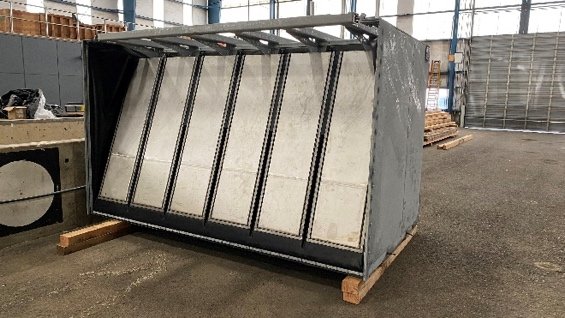 "The Flap" before installation. 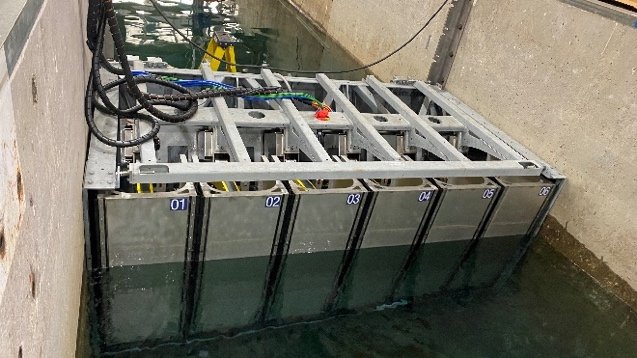