Towers in the Storm 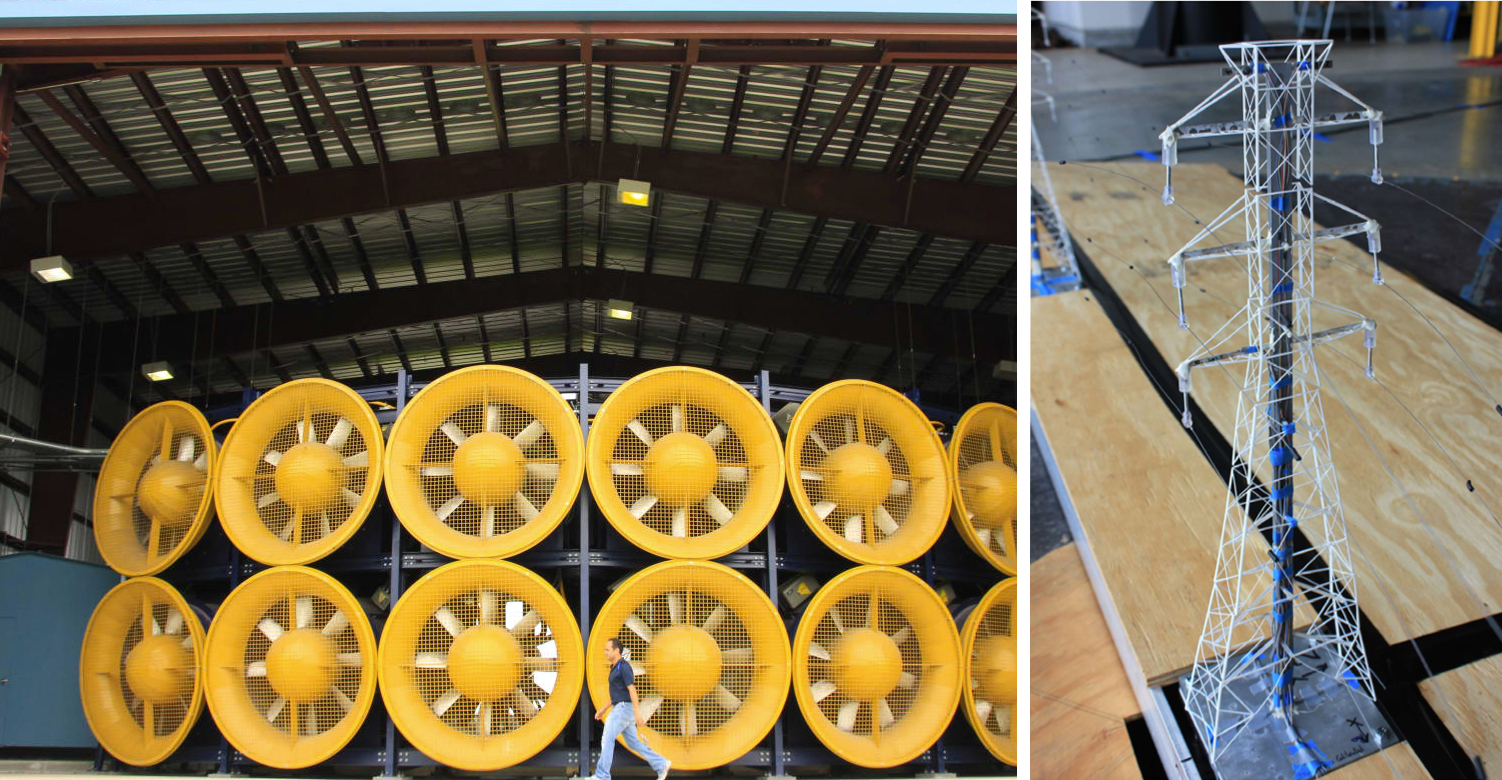 Most people in the U.S. don’t give a second thought to flipping a switch for light. The U.S. made big investments in the mid-20th-century on the transmission side of the national electric grid to provide reliable electricity to society. The problem is that many transmission towers have exceeded their design life by about 50 years, which means the aging grid today faces bigger chances of failure.

One threat to the grid is from damaging winds of extreme storms such as hurricanes. Case in point — over $25 billion dollars in wind damage from Hurricane Michael, which in 2018 toppled about 100 transmission towers in Florida.

A new set of laboratory experimental data aims to help scientists and engineers understand and avert the threat of gale-force winds on electric transmission structures. The project  (PRJ-1379) won a 2022 DesignSafe Dataset Award , which recognized the dataset's diverse contributions to natural hazards research.

The researchers used one of the world’s most powerful hurricane simulators, the Natural Hazards Engineering Research Infrastructure (NHERI) Wall of Wind Experimental Facility at Florida International University (FIU) and funded by the National Science Foundation (NSF). Realistic 1:50 scale models of transmission towers and a multi-span transmission electrical cable system were worked over by the Wall of Wind, capable of generating Category 5 hurricane-force winds of 157 miles per hour.

Different wind speeds and directions were tested to simulate the chaos and complexity of real hurricanes. The tests, conducted in July 2019, measured the elastic forces induced by motions of the structure, the wind and different components of this structure under wind-structure interaction effects.

The science team published parts of their results in July 2021 in the journal Engineering Structures. Several other papers based on the generated data from this project are currently under review.

“One of the main outcomes so far, and the reason it’s still ongoing after the project has ended, is the identification and characterization of the most important parameters for analysis and design of these structures,” said Abdollah Shafieezadeh, Lichtenstein Associate Professor in the Department of Civil, Environmental and Geodetic Engineering at The Ohio State University (OSU).

As a primary focus of this research, Shafieezadeh and colleagues studied two key parameters — gust effect factor and drag coefficients — used by scientists and engineers for analyzing the impact of wind on transmission tower and conductor systems, and also in using the model they developed for the design phase of new systems.

The model towers were instrumented with three 3-axis accelerometers, one 6-degrees-of-freedom load cell, and six strain gauges, basically capturing motion of the cross-arms, base shears, and torsional reactions. A data acquisition system collected measurements from the sensors, which were eventually analyzed by statistical methods.

They did three sets of tests — one was on single towers without insulators; another was with a multi-span transmission line; the last test looked at the response of the tower system when a conductor or insulator fails under hurricane winds, something unique to this experiment. Each of these tests provided new insights that are important for understanding the complex behavior of tower structures under extreme wind effects.

“The main thing that we learned from the study is about the gust effect factors. The peak loads were different than what are published in the standards,” said Arindam Chowdhury, PI and Director of the NHERI Wall of Wind Experimental Facility; and Professor and Chair in the Department of Civil and Environmental Engineering at FIU.

Chowdhury and colleagues at FIU generated higher fidelity, more reliable estimates of these parameters with their state-of-the-art wind lab. Shafieezadeh and colleagues at OSU then compared that data against what is available in the engineering codes and standards ASCE-7 and ASCE-74 and updated the existing models.

“We saw that these codes are potentially underestimating these factors,” said Shafieezadeh. “That could have implications for the safety, reliability, and resilience of these structures.”

Pictures of the NHERI Wall of Wind Experimental Facility at Florida International University: (left) 12-fan system captured from the intake side, and (right) flow management box.

They stressed that there is nuance in the results and not just one general conclusion, because it depends on many factors such as wind speed, wind direction, and the characteristics of the tower.

“But we saw a general trend is an underestimation of the loads,” Shafieezadeh said.

They also found the effect in all directions was important; the codes mainly cover the along-wind direction.

“We tested crosswind direction and generated gust effect factors and drag coefficients for those directions," Chowdhury said. "These are new. Some of these data might be incorporated in the standards for transmission lines, which could help improve the safety of new towers built.”

The dataset, https://doi.org/10.17603/ds2-mazf-t957, was made publicly available on the NHERI DesignSafe cyberinfrastructure.

“Learning about DesignSafe and the structure it offers was very helpful,” Shafieezadeh said. “We have massive amounts of data produced by these experiments. DesignSafe makes it structured and available in a meaningful way to the community, so they can use it without going through many hoops.”

“DesignSafe gave us the structure, the training for the students who participated, and the best way that the dataset can be used by a larger community without difficulty in navigating through the data,” Chowdhury added.

“A key aspect was to get real data of the performance of these structures and understand their behavior and translate it to our computational models,” Shafieezadeh said.

“We use the computational models to develop ‘fragility models’ that allow us to analyze the probability of a particular damage state happening in the system as a function of the characteristics of the hazard, in this case wind speed and wind direction,” he added.

Another example of the data being used is by the NSF-funded project, “CAREER: Resiliency of Electric Power Networks under Wind Loads and Aging Effects through Risk-Informed Design and Assessment Strategies,” led by Alice Alipour of Iowa State University.

Said Shafieezadeh: “In order to keep the system reliable and resilient in the future, we need to invest in improving the electric grid. One strategy is to identify the grid’s most vulnerable parts. That requires a deeper understanding of the behavior of these structures so that we can identify vulnerabilities and cost-effectively design new structures or upgrade them. That's where a data set of this study can help substantially in answering those questions.”