A soil-pile-bridge system dataset was awarded a 2022 DesignSafe Dataset Award. It investigates how liquefaction-induced downdrag can add to the structural load applied to a pile foundation during earthquake shaking. The data was generated by inducing liquefaction in scale soil models in the University of California, Davis Geotechnical Centrifuge. Their dataset includes two well-documented experiments, one with uniform and the other with interbedded liquefiable deposits. Credit: Sinha et al.

Can a bridge withstand an earthquake? One of the big unknowns is how far a bridge might settle from seismic shaking, especially if the shaking triggers a quicksand-like soil response called liquefaction.

Scientists at the University of California (UC), Davis have compiled the most detailed experimental data yet seen on how liquefaction-induced downdrag can add to the structural load applied to a pile foundation during earthquake shaking.

“I was very happy with the agility the DesignSafe platform offers its users to curate their data in a way that makes most sense to them.”

Their dataset was awarded a 2022 DesignSafe Dataset Award, which recognized the dataset's diverse contributions to natural hazards research.

The dataset was also made publicly available on the NHERI DesignSafe cyberinfrastructure.

“This research will help in predicting how much settlement pile foundations will have if piles go through liquefiable deposits,” said dataset co-author Bruce Kutter, a professor emeritus at UC Davis.

“Our research also helps our understanding of this phenomenon move more strongly in a direction where we can account for the soil and the structure as a system from the foundation, all the way to the superstructure,” said dataset co-author Katerina Ziotopoulou, an associate professor at UC Davis.

Modern bridges are supported by large columns called piles that are driven deep into the ground. Liquefaction, which is the loss of soil strength due to the development of excess pore water pressures during earthquake shaking, can make the normally stable sand layer under the bridge pile lose their shear strength.

Additionally, when the excess pore water pressures dissipate after shaking has ceased and the soil regains its strength while settling, that can also affect the piles which can be then dragged downwards.

The data report has a number of experiments where scientists varied the thickness and stratigraphy of the liquefiable layers; the intensity of shaking; and the piles. They monitored how the downdrag forces on the bridge foundation pile build up.

“Our dataset refined the sequence of all those interdependent factors — the shaking, the increase in water pressure, the dissipation, the settlement, and the subsequent increase in axial load. Those things happen in sequence,” Kutter said.

“It just makes sense that our data be shared, archived, and available. Having it on DesignSafe means that it can be used in the future.”

Accelerometers, pore pressure transducers, linear potentiometers, and settlement markers measured the pile acceleration and settlement of soil and pile. The model was then tested on a 9-m radius geotechnical centrifuge that is equipped with a shake table. Cone penetration tests, pile load tests, and vane shear tests were performed to determine the state of the model at different phases of the test.

The authors describe their experiment further in a study published in April 2022 in the Journal of Geotechnical and Geoenvironmental Engineering.

“We developed new contactless displacement tracking procedures with cameras and laser lines that were placed above the model," Ziotopoulou added. "And we developed image processing techniques so that we could combine the two and get a very clear idea of how the piles move the soil."

“We found something unexpected, but also substantiated by the data. Several mechanisms that lead to pile settlement occur during shaking,” Ziotopoulou said.

Left: Sumeet and Bruce inspecting the model (from the SKS02 test) after testing and gradually excavating. Right: Sumeet, Bruce and Katerina next to consolidation press preparing the model for SKS02. Credit: Sinha et al.

The scientists had expected that most of the damage would occur after the shaking had finished.

“We also learned that it wouldn't be likely for the pile to settle more than the ground around it,” Kutter added.

This is good news for bridge design, as it was previously thought that if the downdrag forces on the pile were large, it might lead to significant plunging of the pile. 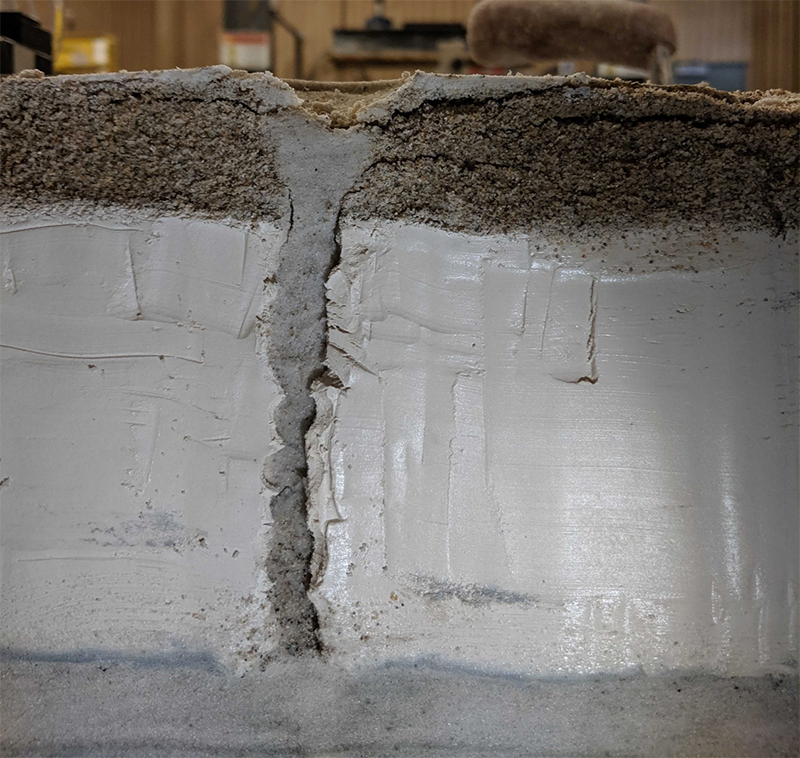 The authors credit the success of the experiment to dataset and study co-author Sumeet K. Sinha, now a post-doctoral researcher at UC Berkeley.

“Sinha was exquisite in setting the tone and leading efforts in characterizing conditions before, during, and after the shaking in every component of the system. We now have this complete view,” Ziotopoulou said.

The authors intend for the data to be used by as broad a range of researchers as possible from experimentalists to numerical modelers.

“We wanted to make sure that the data is versatile enough so that other experimentalists could see how we went about our protocols, get inspired by it and learn from it. For numerical modelers, we provided both raw data recorded at the centrifuge, but also processed data to save them time in processing,” Ziotopoulou said.

The authors acknowledged that they chose DesignSafe as their data platform because of its track record of security and stability, and of the flexibility it offered.

“I was very happy with the agility the DesignSafe platform offers its users to curate their data in a way that makes most sense to them,” Ziotopoulou said.

She also appreciated the ability to generate Digital Object Identifier (DOI) numbers on the dataset (DOI:10.17603/ds2-d25m-gg48 and DOI:10.17603/ds2-wjgx-tb78), which helps other researchers find and reference the data.

“It just makes sense that our data be shared, archived, and available. Having it on DesignSafe means that it can be used in the future.” Kutter added.

Said Ziotopoulou: “Data and modeling helps us understand the soil-pile-bridge system. They're not islands. The soil, the piles, the building — they work as one. And as we move forward, we should be addressing them as such and evaluate their interactions.”

This work was funded by the California Department of Transportation under Agreement 65A0688. The authors would like to acknowledge Caltrans engineers and staff for their initiation of the project and guidance along the way. The 9-m radius centrifuge facility at UC Davis is part of the NSF Natural Hazards Engineering Research Infrastructure (NHERI) program under award CMMI 2037883. The authors thank the staff of the UC Davis Center for Geotechnical Modeling for making these experiments possible. They would also like to acknowledge all the staff at the facility as well as the graduate and undergraduate students who helped the lead graduate student, Sumeet Sinha, in the work.