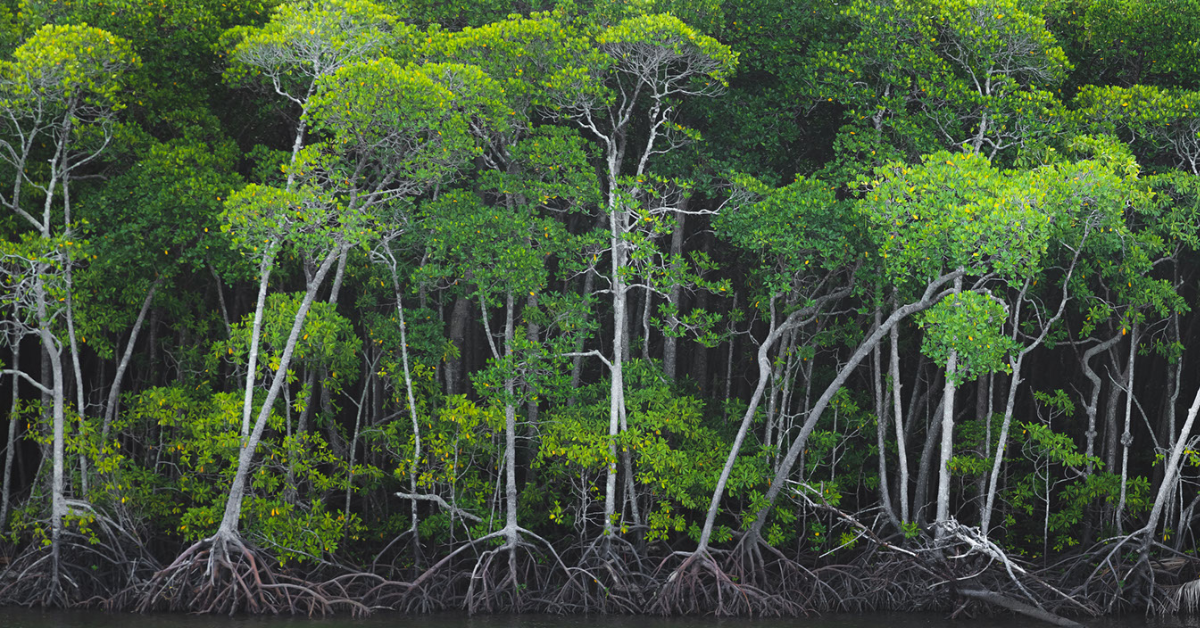 Mangrove forests provide a line of defense against storm waves from hurricanes and tsunamis. A new dataset measures for the first time the engineering performance metric of wave height attenuation by mangrove trees using a prototype-scale physical model investigation. The authors won a 2022 DesignSafe dataset award.

Mangrove trees can act like a sentinel against hurricane-generated or tsunami wave damage. Their roots intertwine to form a dense thicket above water that breaks waves and helps blunt the force of an incoming wave’s energy.

A study in the journal Science found that the cataclysmic 2004 Indian Ocean tsunami, which killed more than 227,000 people, caused less damage to areas with coastal forests like mangroves. More recent studies have similarly shown that mangroves provided protection for communities and structures during hurricane overland flow events.

“PRJ-2143: Experimental Investigation of Wave, Surge, and Tsunami Transformation over Natural Shorelines” (DOI: 10.17603/ds2-znjw-1f81) — was awarded a 2022 DesignSafe Dataset Award, which recognized the dataset's diverse contributions to natural hazards research, such as providing much-needed context for the possibilities of engineering using natural systems.

The DesignSafe cyberinfrastructure and software development team is located at the Texas Advanced Computing Center (TACC) at The University of Texas at Austin. TACC provides supercomputers for participating natural hazards researchers to perform large-scale simulations using programs such as OpenSees, OpenFoam, and ADCIRC for analysis of structures and civil infrastructure, as well as performing analysis of extreme scale datasets for societal impact. The resulting datasets are published in the Data Depot repository, enabling open access via web portal.

The scientists constructed an artificial mangrove forest with PVC pipes for the trunks and cross-linked polyethylene (PEX) for the roots with the forest measuring 18-meters cross-shore width. They placed the forest model in a 104-meter long wave tank called a flume, using the Natural Hazards Engineering Research Infrastructure (NHERI) Experimental Facility at OSU.

Photos and video from each trial run of the experiment are also included in the dataset, made publicly available by DesignSafe.

“We saw measurable wave height attenuation through the 18-meter forest. The mangroves had a noticeable effect, even over this small cross-shore width,” Tomiczek said.

“This makes sense, but it's important to validate it with the data as well,” Tomiczek added.

The awardees published the results of their prototype mangrove forest study (DOI:10.17603/ds2-znjw-1f81) January 2022 in the journal Frontiers in Marine Science.

A big takeaway from the study was the importance of scaling when building a physical idealized model of a real-world system. The NHERI facility at Oregon State allowed them to build the model at full scale, using tree measurements taken from red mangrove specimens at Rookery Bay, Florida.

”Using the full-scale model, we were able to show that reduced scale models work, but only if one accounts for how other things, such as the Reynolds Number of turbulence, scale down,” Tomiczek said.

“This is the first dataset that investigated the impact on waves by a mangrove system in a controlled setting at prototype scale for large storm-waves,” Kelty added.

On top of having three separate places of local storage, the authors turned to DesignSafe not only to secure the data but also to share it easily with other scientists through the easy-to-use, drag-and-drop style portal.

“I really liked how the Data Depot workspace allowed us to upload all the data regularly, where I could check out datasets because I was remote for the entirety of the experiments due to COVID precautions,” Tomiczek said. 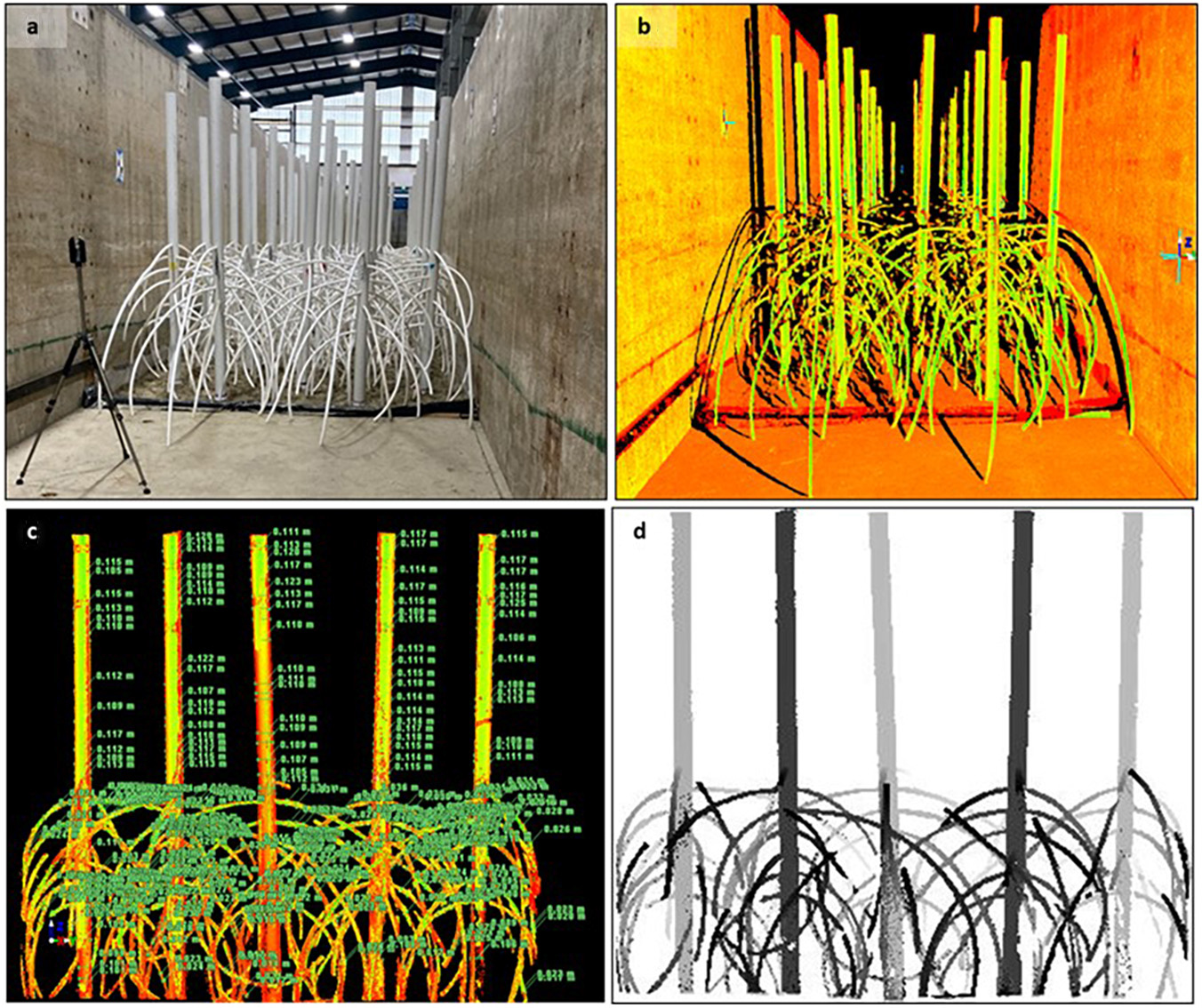 The researchers hope that numerical modelers use the prototype mangrove forest wave attenuation data to validate their results and save time in getting critical data in their efforts to parameterize vegetation.

Said Tomiczek: “It's an exciting and scary time to be an engineer, what with sea level rise, intensifying hurricanes, and more. We need to develop creative, resilient, sustainable solutions. This research is trying to put a little bit more engineering in ‘engineering with nature.’”

This project was funded by the National Science Foundation Grants #1519679, #1825080, #1661315, and #2037914, and by the U.S. Army Corps of Engineers’ Engineering Research and Development Center. Any opinions, findings, and conclusions or recommendations expressed in this material are those of the authors and do not necessarily reflect the views of the National Science Foundation, United States Army Corps of Engineers, or United States Naval Academy.

Prototype-Scale Physical Model of Wave Attenuation Through a Mangrove Forest of Moderate Cross-Shore Thickness: LiDAR-Based Characterization and Reynolds Scaling for Engineering With Nature