The NCO has developed, with input from the Experimental Facility (EF) sites, a protocol to standardize the scheduling of NHERI projects.  This protocol is composed of six phases through which each approved NHERI project will progress.  The first two phases involve training of researchers in the utilization of a facility's equipment and the development of a detailed experimental plan for how the facility's equipment will be used.  These phases are scheduled at the discretion of the researchers and EF site staff.  Phases 3-6 involve the actual use of the facility which means the scheduling of these portions of each project will be managed centrally by the NCO's dedicated Facility Scheduler and Operations Coordinator (FSOC) to fairly and efficiently share the facility resources among all. 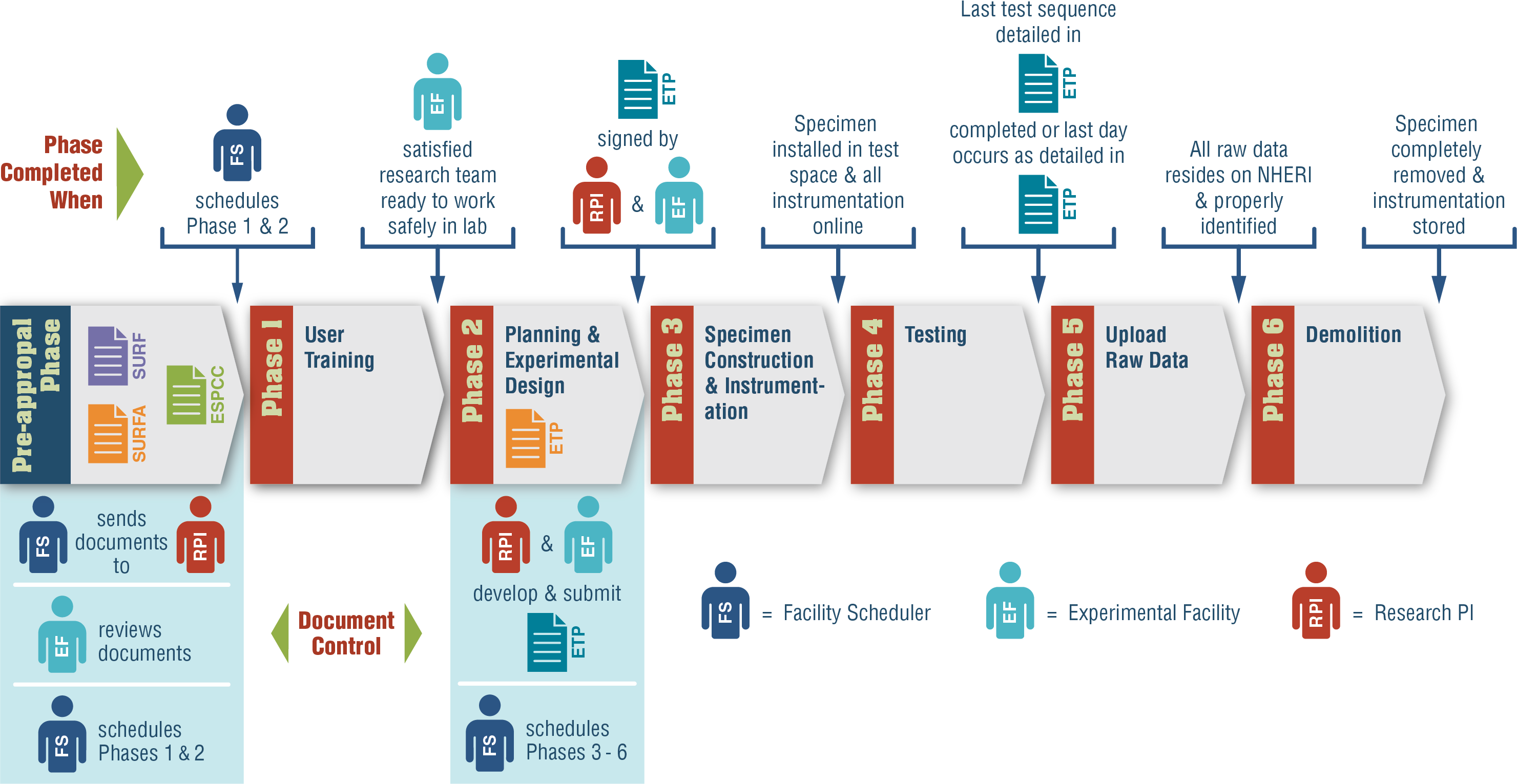 During the first phase, EF sites will coordinate with researchers to make sure everyone involved with the project is properly trained to safely be within the facility and near the test equipment.

The second phase of each project is to produce a detailed document of the experiments to be performed called the Experimental Test Plan (ETP).  It is important for researchers and EF site personnel to each have a full understanding of the work to be performed on the EF site equipment during the scheduled time within the facility as researchers will not be directly operating the test equipment.  The researchers and EF site personnel will work together to ensure the ETP is realistic to the site's equipment capabilities and that an adequate amount of time within the facility has been allotted to the project.

This marks the beginning of the project time inside the EF site work area and the first phase to be strictly scheduled by the NCO.  It is now that test rigs will be constructed for the experiments to be performed.  Some EF sites will have an area where this construction can happen away from the actual test equipment, but it may be necessary due to the layout of some EF sites or the specifics of some experiments to be performed that test rigs be constructed directly on the experimental equipment.

This phase is the actual experimentation to be performed.  Each EF site offers to researchers a different level of access to operate the equipment based upon local policies for safety and liability.  Some EF sites will allow researchers to operate test equipment with appropriate training, and some EF sites will only allow researchers to direct how EF site personnel will operate the equipment to perform the experiments.  These details should be established for each project during the development of the ETP in Phase 2 so the role of each participant is clear.

This marks a milestone where experimental data ownership is transferred from the EF site to the researchers for analysis.  Raw data from the test equipment will be transferred to NHERI data storage servers operated by the NHERI Cyberinfrastructure team.  Each EF site will have local procedures in place for performing this file transfer from their unique equipment setup to the NHERI servers.  Some sites may perform this data transfer during the testing phase, and some sites may allow the data transfer to happen simultaneously with the following demolition phase.  Any analysis and results of the experiments are not captured within the scheduling protocol as they do not require any use of the EF site and fall outside the scope of the management of facility equipment utilization.

The final stage of each NHERI project is to remove any leftover test rigging from the EF site equipment so it can be prepared for the next project to enter the space.  If mulitple rounds of testing are performed within the ETP, some demolition may have occured previously at the discretion of the EF site personnel as the use of each test rig has ended.  By the end of this phase, however, all test rigging from all experimental rounds is to have been demolished and removed from the EF site work area.

The Facility Scheduling Protocol is formally defined in the following document provided for download.  The NCO developed the protocol in cooperation with the EF sites.  Starting with the scheduling protocols of previous programs like The George E. Brown Jr. Network for Earthquake Engineering Simulation (NEES) for inspiration, the NCO used valuable input from EF sites and researchers to refine a protocol that would be suitable to all forms of research across all the participating EF sites in the NHERI program.