In this project, Lehigh University faculty James Ricles and Spencer Quiel and Iowa State faculty Simon Laflamme envision cladding systems as multifunctional structural units. Not only would the cladding serve its traditional purposes, but it would also be engaged as an engineered system to protect the structure against multiple hazards, including seismic, high-to-extreme wind, and blast loads. Cladding serves both as the point of application of externally applied lateral loads, such as wind and blast, as well as a contributor of added inertia due to seismic or wind-induced vibrations. Specifically, this project will explore the use of semi-active controlled connections between cladding and the structural framing of a building, and these connections will be capable of providing variable damping to mitigate the effects of extreme loading.

The project is a collaborative effort between Lehigh University, Iowa State University, and Taylor Devices Inc. (lead by its founder and CEO/President, Douglas Taylor). The focus of this project is the experimental and computational response of a prototype semi-active damping device, installed between the cladding and structural frame, to variable loading frequencies and intensities from multiple hazards. The objective of the proposed system is twofold: (1) to engage the cladding as a mass damper to mitigate inter-story drift due to lateral load vibrations; and (2) to utilize the device as an energy dissipator to mitigate the transfer of reactions from cladding to the structure under lateral loads. The project consists of five major research tasks.

For Task 1, prototype buildings with 4, 10, and 24 stories were designed according to current code requirements for wind, earthquake, and blast loading. Computational models of the buildings were developed using the computer program OpenSees. For design of the cladding, the research team has been interacting with Eastern Wall Exterior Systems (EEWS), an industrial partner specializing in the design and construction of building cladding systems. The team met with EEWS to review designs and to get updated information about current cladding design practice and details. “Our industrial partners at EEWS have helped us identify cladding connection modifications that can accommodate the use of semi-active damping devices,” says Spencer Quiel, co-PI on the project.

Task 2: Design and Construction of a Semi-Active Control System

Under Task 2, characterization testing was performed at Iowa State University for a small-scale prototype version of a semi-active cladding connector damping device (see Figure 1). This device acts as the lateral connection between the cladding and the building frame, providing a source of damping from hysteretic energy that is dissipated by friction. A semi-active friction mechanism in the toggle’s geometry is used to provide a variable damping force, and an impact rubber bumper is utilized to absorb pounding energy under extreme events. The purpose of the characterization testing is to establish the performance and dynamic properties of the device considering the effects of excitation frequency and displacement stroke. The testing included quasi-static and dynamic cyclic experiments as well as experiments involving device displacement histories based on earthquake time histories.

With Task 3, the team conducted numerical simulations of the 4-story and 10-story prototype building models with the cladding connector damping devices. These simulations subjecting the models to earthquake loading scaled to the 500-year return period hazard level, in addition to wind loading associated with the 700-year return period. The cladding connector damping devices for these numerical simulations had a passive control law. The wind load pressure was obtained by constructing 1:120 scale models of the 4-, 10-, and 24- story buildings via 3-D printing at the University of Florida NHERI Experimental Facility (see Figure 2); each model was subsequently placed in the wind tunnel and subjected to wind forces. “Collaborating with the NHERI site at the University of Florida allowed us to obtain realistic loading input for our numerical simulations of buildings exposed to wind,” Quiel says.

For Task 4, the team performed experimental validations on the 4-story prototype building using real-time hybrid simulations at Lehigh’s ATLSS Laboratory (see Figure 3). The friction devices in the cladding connectors were replaced with a nonlinear viscous damper. The experimental results validated the numerical simulations for earthquake and wind hazards. “We found that an elastic member in parallel with the damper in the cladding connector is needed in order to self-center the cladding with respect to the building during a wind storm,” Quiel says.

Task 5: Validation of Analytical and Computational Models for Design

The project has provided support for two Ph.D. students and two M.S. students (one of each at both Lehigh and Iowa State), who have gained valuable experience in earthquake engineering, blast engineering, and wind engineering for buildings. Five undergraduate students have been involved with the project at Iowa State, focusing on the use of 3D printing technology to create energy mitigation devices. Lehigh also hosted an REU student in Summer 2017 from the California State University at Fullerton who conducted blast-resistant design of the cladding prototypes that will be used in upcoming phases of the project. 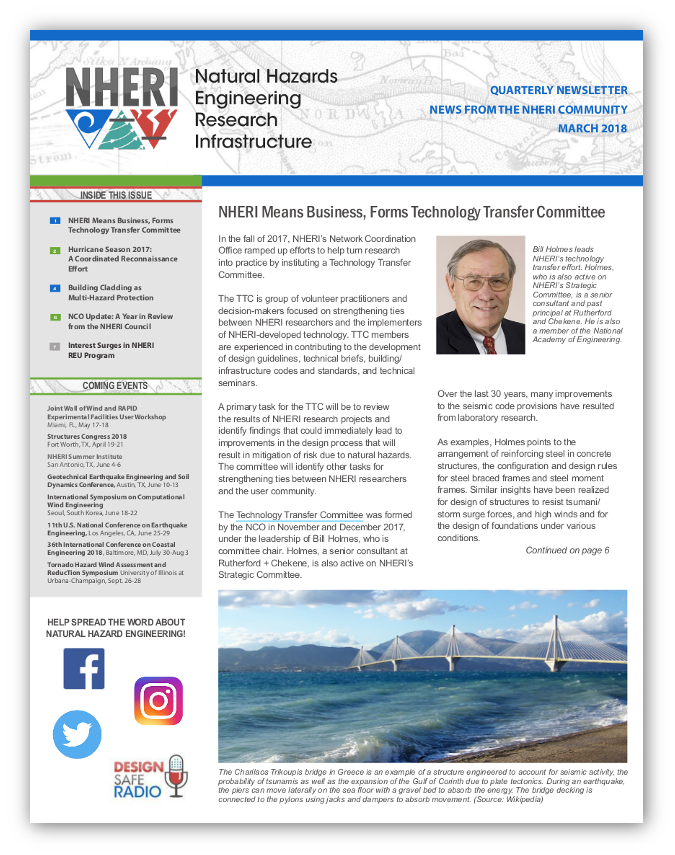