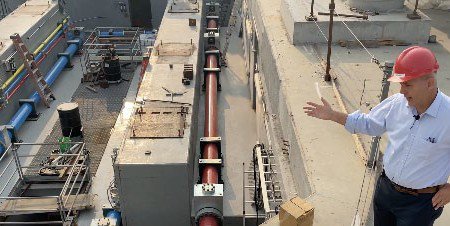 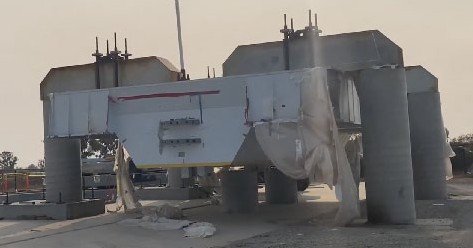 The shake table platen is being stored temporarily on reinforced concrete columns. The 145-ton platen will be machined underneath to accommodate new wearplates and new vertical actuators.

Six-degree-of-freedom LHPOST6 will be the nation's largest, most sophisticated shake table

2020 was a busy year for the team at the NHERI UC San Diego experimental facility.

Despite delays caused by the COVID-19 pandemic, the upgrade to the Large High-Performance Outdoor Shake Table, LHPOST, now called LHPOST6, is proceeding. Thanks to a $16.3 million NSF grant in 2018, the world’s largest outdoor shake table will be capable of testing structures with six-degrees-of-freedom (6-DOF). The work is scheduled for completion in the fall of 2021.

The project team at the UC San Diego Jacobs School of Engineering — and earthquake engineers around the world — look forward to testing a range of new projects at this unique facility. “We will reproduce earthquake motions with the most accuracy of any shake table in the world,” said Professor Joel Conte, principal investigator for the NSF upgrade grant and the NHERI experimental facility.

Since its commissioning in 2004 until its decommission for the upgrade in 2019, 34 landmark projects have been conducted on the LHPOST. The shake table is an NSF shared-use facility, originally part of the Network for Earthquake Engineering Simulation (NEES) and now part of the Natural Hazards Engineering Research Infrastructure (NHERI) network.

When its renovations are complete, the LHPOST6 shake table at UC San Diego will be able to move in all directions: back and forth, up and down, left to right, yaw, pitch and roll.

Reproducing earthquake motions in 6-DOF is key because during a temblor, the ground may move in any direction.

For example, during the 1994 Northridge earthquake in the Los Angeles area, bridge columns punched through bridge decks, hinting at a strong vertical ground motion. Similarly, during the 1971 San Fernando earthquake, the buildings twisted and swayed, hinting that the ground was probably rotating. 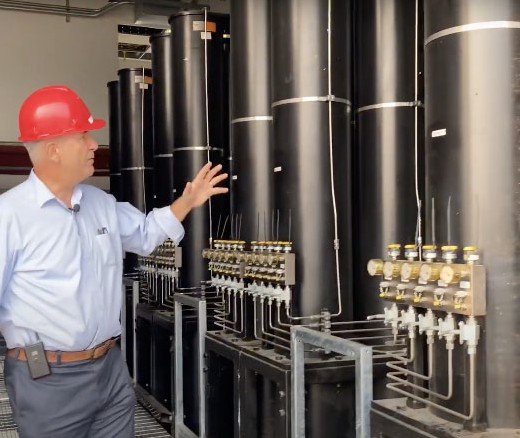 The new accumulator bank consists of 75 bottles, with capacity for 10,000 gallons of hydraulic fluid. These pressurized tanks will control the horizontal and vertical actuators that will reproduce multidimensional earthquake motions. 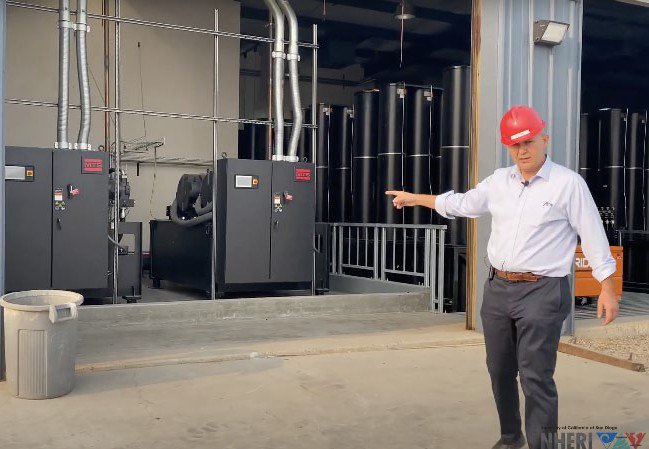 The first structure to undergo tests on the renovated shake table will be a full-scale, 10-story building made from cross-laminated timber. The goal of the NHERI Tallwood project, led by Shiling Pei, associate professor of engineering at the Colorado School of Mines, will be to gather critical fundamental data for designing tall wood- framed buildings — as tall as 20 stories — that do not sustain significant damage during large earthquakes.

“As the seismic engineering community increasingly focuses on resilience metrics, the ability to test full- building systems in tri-axial motion will significantly advance our knowledge on the resilience of structural and non-structural assemblies,” Pei said.

“We have learned from the past that some engineering problems can only be discovered by subjecting the test structure to 3D motions, such as the response of non- structural components in base-isolated buildings under vertical ground motion.” He added, “Our team is very excited to use the increased capacity of the shake table to test our design of the 10-story wood building. We want to validate thoroughly its resilience under realistic loading conditions.”

Researchers will use LHPOST6 to test the heaviest test specimens in the world, from multi-story buildings, to bridge columns, bridge bents, wind turbines, and with a full range of ground motions that can occur during an earthquake.

The mechanical additions to the shake table include a whole new power infrastructure, new hydraulic pumps, a cooling tower and very large accumulator banks for the facility’s hydraulic-powered system.

As with the original LHPOST, the preliminary design of the LHPOST6 was a collaboration between UC San Diego and MTS Systems Corporation. The target performance of the LHPOST6 was defined as its ability to reproduce six tri-axial strong ground motions: from the 1978 Tabas (Iran), 1994 Northridge (California), 1995 Kobe (Japan), 1999 Chi-Chi (Taiwan), and 2015 Nepal earthquakes, and an AC-156 compatible artificial earthquake record developed for seismic qualification testing (ICC 229 2007). 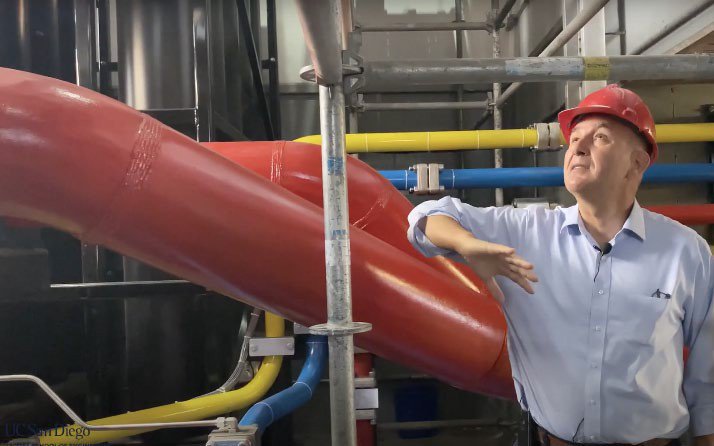 New pressure pipes have a 12-inch inside diameter, with a 1.25-inch thickness. 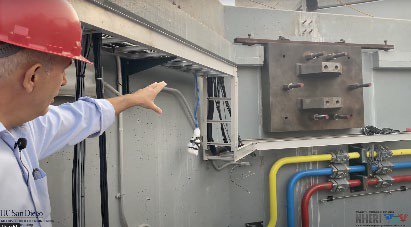 One of hte steel plates to which the horizontal actuator will be anchored, shown prior to grouting.

FUTURE OF ENGINEERING AT LHPOST6

The LHPOST has the largest payload capacity in the world and ranks second in size after Japan’s E-Defense shake table. The tallest structures ever tested on a shake table have used the LHPOST, which has no roof overhead, and is therefore free from height or crane capacity restrictions. Tall cranes and heavy lifting equipment can easily be deployed to construct full-scale buildings and other structures.

LHPOST6 will be the largest shake table facility in the U.S. and the second largest in the world. It will enable ground-breaking experimental research related to structural, geo-structural, soil-foundation-structural, and non-structural components and systems including how these systems behave during realistic multi-component earthquake excitations, and how they should be conceived and designed to resist such excitations best. Below are some key areas of focus:

The LHPOST6 will enable the robust assessment of the seismic safety of URM buildings and the development of effective retrofit and strengthening methods.

LHPOST6 can facilitate research to assess interactions in building systems undergoing earthquakes. Shake table testing will aid in assessing problems such as competing inelasticity in vertical and horizontal lateral- force resisting systems, overstrength and system effects derived from the participation of gravity, and non- structural framing in lateral response.

Current design standards rely on 3D computational models of structures to extrapolate results of uniaxial shake table tests to project structural performance under multi-axial loading conditions. The lack of pertinent data to validate the accuracy of computational models for these predictive analyses is an important issue. Multi-axis shake table tests are needed to study more realistically the behavior of civil structures and to improve current seismic design methods and standards.

The scarceness of full-scale building shake table tests that incorporate NCSs limits our understanding of the seismic response of these non-structural components.

Limited recent tests, supported by field observations, demonstrate the importance of advancing our understanding and predictive capabilities under multi-directional loading of NCSs in building systems. Full-scale multi- axial shake table tests are needed to advance the development of a reliable, unified design strategy for NCSs accounting for multi-directional earthquake excitation.

Extensive damage in conventional buildings has caused a push in earthquake-affected communities in the past two decades to use low-damage structural earthquake protective systems. Such systems can sustain significant nonlinear response, large lateral displacements, and damping with practically no damage and maintained operability after strong earthquake ground motions.

The LHPOST6 is ideally suited for experimental investigations of dynamic SSI. Three general types of experimental SSI studies can be envisioned:

With verification studies under tri-axial excitation, computer models of the complete soil, foundation, structure system can be used to obtain the total translational and rotational motion of the foundation, which can then be applied at the base of the structure placed on the LHPOST6. The resulting experimental motion of the structure can be compared with the numerical simulation to validate both the theoretical model and computational method.

The LHPOST6 can support the testing of underground pipelines subject to liquefaction loads or fault crossing demands by taking advantage of the large displacement capacity of the LHPOST6, enabling researchers to conduct large-scale dynamic testing of underground facilities and pipelines and techniques for evaluating ground movement patterns and stability for a variety of excavation, tunneling, micro-tunneling, and mining conditions.

The NHERI at UC San Diego website provides details on past projects. Test results and research data are available on the NHERI DesignSafe Data Depot repository. For details on LHPOST6, see the recent article in the Frontiers in Built Environment article.

As the upgrade project nears completion, the team at UC San Diego will provide more updates and details about scheduling projects, including non-structural tests in the Tallwood building. 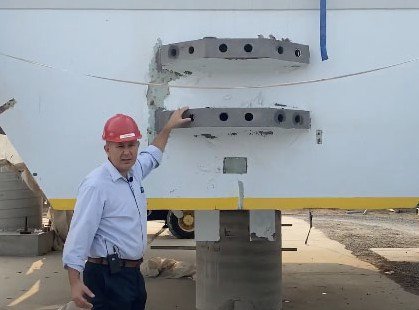 Horizontal actuator connections on the platen. 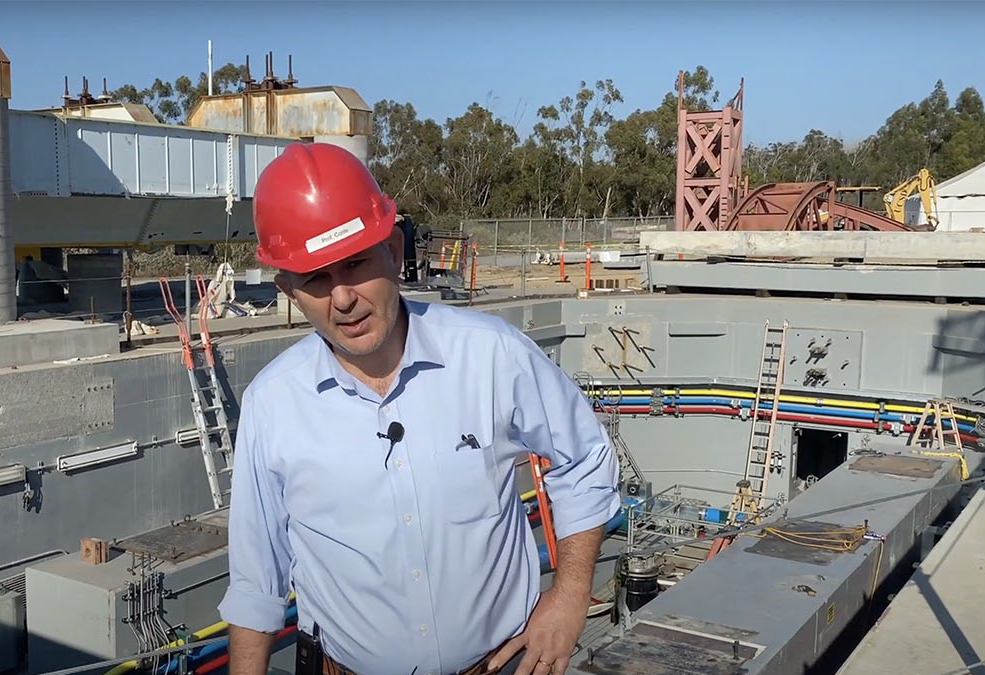 Case Study: Sustainable Outreach at the FIU Wall of Wind 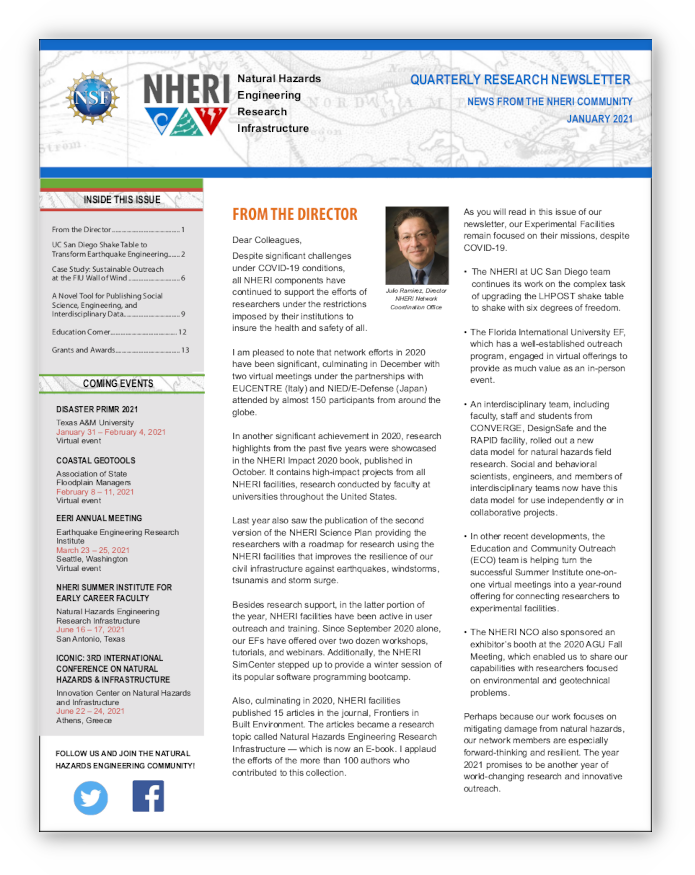 View the full Winter 2021 issue as a PDF