On December 22, 2018, the Indonesian island-volcano Anak Krakatau erupted, including a violent submarine eruption from its main conduit. More than two-thirds of the volcano collapsed into the sea, resulting in a tsunami that killed more than 400 and injured more than 14,000.

Hermann Fritz, professor at the Georgia Tech School of Civil and Environmental Engineering, aims to provide this missing data. And he is doing it by designing his own tsunami generation machine and creating his own tsunamis in Oregon State University’s Hinsdale wave basin laboratory, an NSF-funded NHERI experimental facility.

Fritz’s NSF-funded work is particularly appealing in light of several recent volcano-related tsunamis in the Ring of Fire region, including Anak Krakatau. “The processes in that eruption are not exactly the same as the scenarios we created,” says Fritz. But there are parallels, he says.

“Ours is a unique application because we did not use the wave basin traditionally,” Fritz says. “We basically installed a tsunami wave generator on the basin floor.”

Working with an engineering firm to fabricate the device, Fritz and his team designed an underwater volcano that could send a vertical column of water up through the water’s surface to cause a big displacement — so he and his team could record and study the processes of submarine-generated tsunamis.

In over 300 experiments with his custom- built volcanic tsunami generator, Fritz and his graduate student Yibin Liu simulated different types of volcanoes, and they measured 3D velocities and surface elevation around the volcano – as well as runup on the shoreline.

Although earthquakes cause most tsunamis, recent events in the Ring of Fire show that it is vital to understand the kinds of underwater eruptions and landslides that cause tsunamis.

Data from this work will help researchers understand how tsunami waves propagate from such an eruption and, perhaps more importantly, validate and improve prediction models.

“The wave characteristics could be potentially quite different for submarine volcanic eruptions. Some of the models that have been in operation have been very well established for tsunami warning purposes for earthquakes, but their associated tsunamis may not be directly applicable.”

“It’s very hard to determine the size of a potential tsunami generated by a submarine volcanic eruptions,” Fritz says. “So that is our challenge, to characterize these tsunami waves.”

Data from Fritz’s experiments may help coastal communities modify their warning systems to account for these unusual, but deadly, natural hazards.

Fritz’s long-term goal is to transform the field’s assessment and mitigation of submarine volcanic tsunamis.

Underwater video time-series (top to bottom) of volcanic tsunami generator punching/erupting through the water surface with depth of 0.97m and launch pressure of 145 psi (10 bar). Note the total reflection of the VTG on the water surface (Photo: Yibin Liu, Georgia Tech).

Video time-series (top to bottom) of surface spike above the submerged VTG with water depth of 1.17m and a launch pressure of 130psi (Photo: Yibin Liu, Georgia Tech).

Data from this work will help researchers understand how tsunami waves propogate from such an eruption and, perhaps more importantly, validate and improve prediction models. 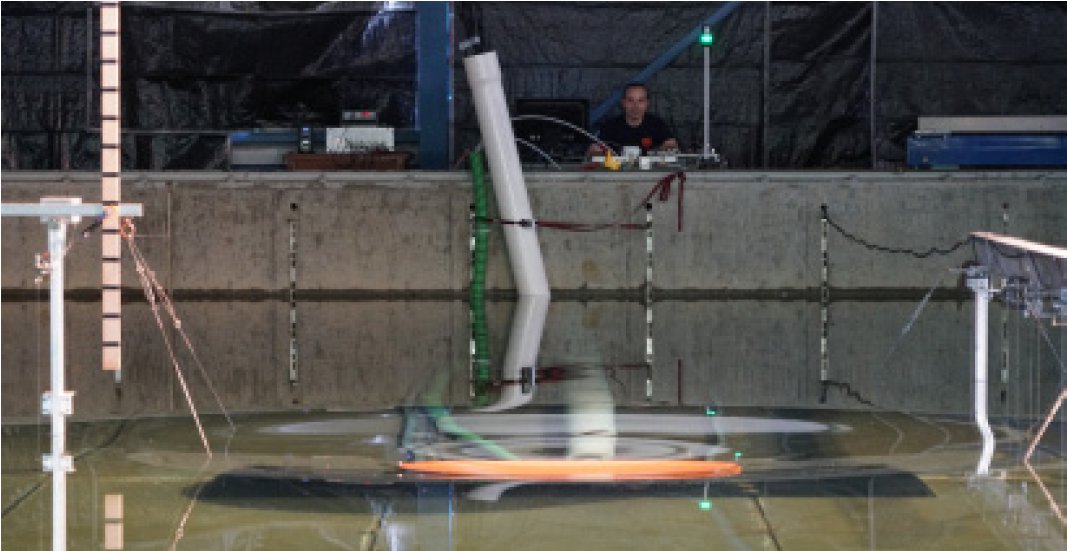 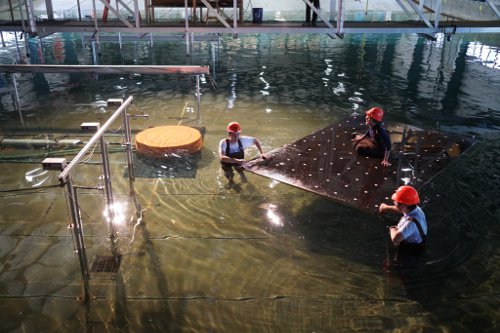 NSF REU students have fun rafting/floating the dotted calibration board on top of the submerged orange volcanic tsunami generator. The calibration board is used for the stereo, video-based, 3D surface reconstruction. (Photo: Hermann Fritz, Georgia Tech) 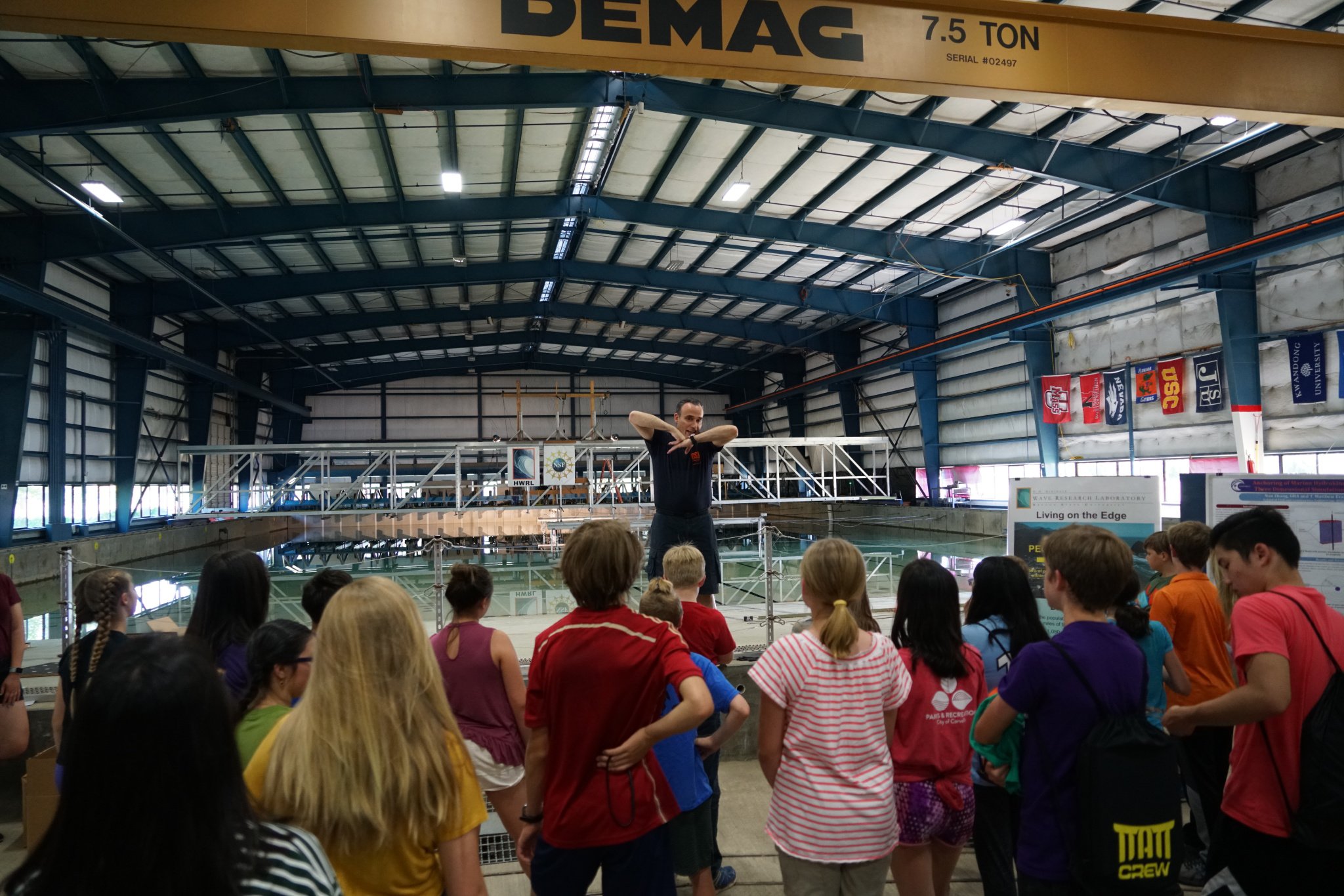 Greetings from the NCO 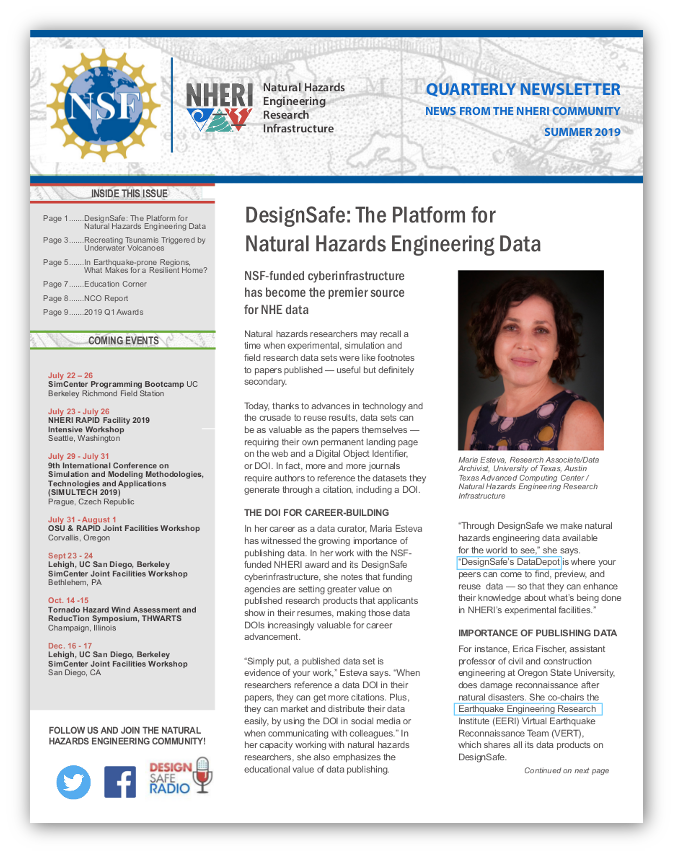 View the full Summer 2019 issue as a PDF