Field survey reports after recent tsunamis suggest that local residents in mainland areas believe that nearby islands protect them from tsunami waves. Alarmingly, results from recent "active learning" numerical studies suggest just the opposite: in most cases, offshore islands actually amplify tsunamis in the shadow zones behind them.

Professor Jim Kaihatu of Texas A&M University is leading a project to discover if this amplification effect is real, given that the active learning methodology requires about 100,000 times fewer computations than conventional mathematical approaches. In the summers of 2016 and 2017, Kaihatu and his team studied the physical manifestation of this effect during comprehensive wave tank testing at the O.H. Hinsdale Wave Research Laboratory, a NHERI experimental facility.

On this effort, Kaihatu worked in tandem with a University of Southern California research team, led by Costas Synolakis and Patrick Lynett. 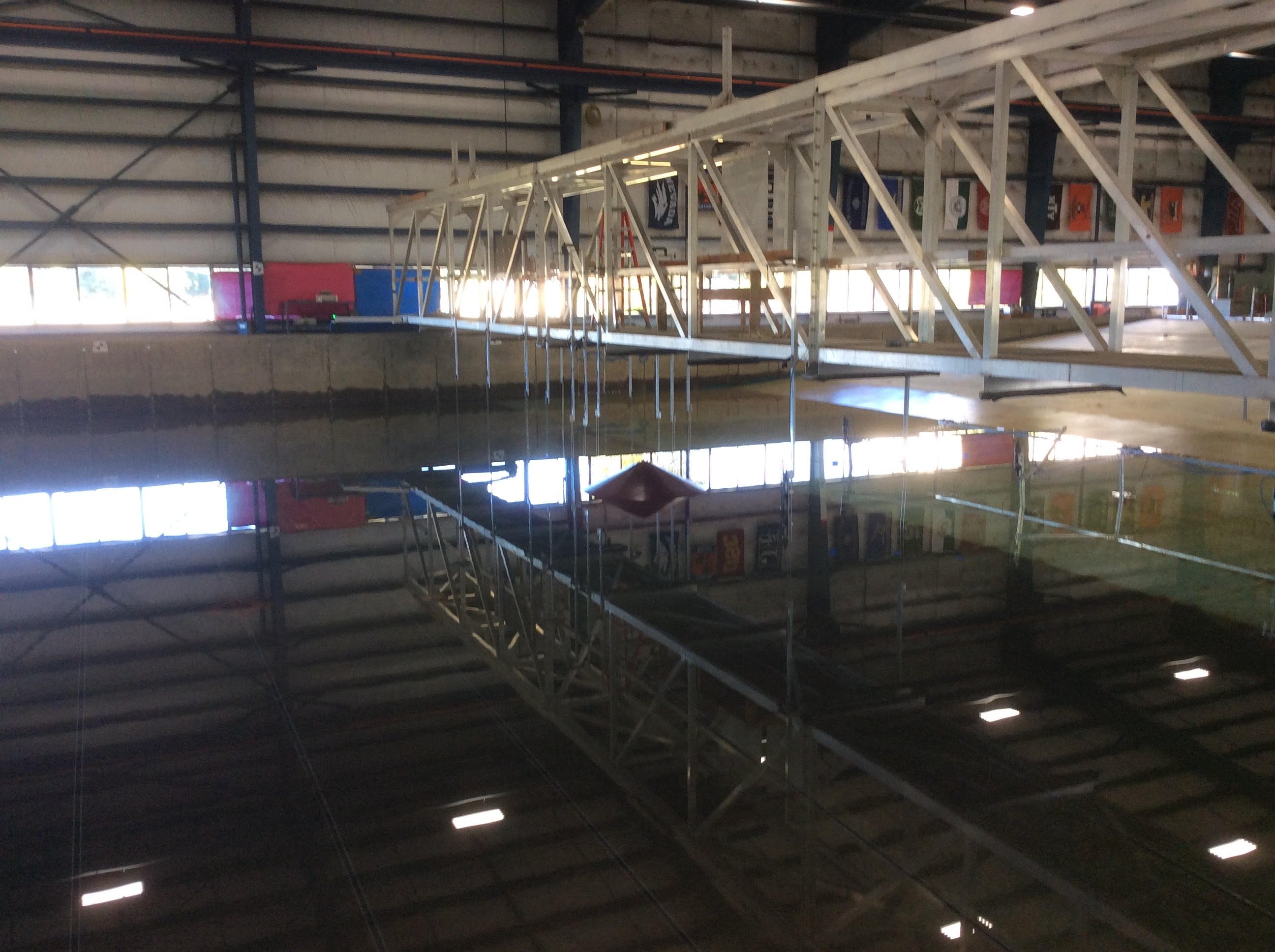 For the tests, a series of four sheet metal islands were constructed to represent the offshore islands impacted by tsunamis. All islands had a diameter of 2m at the waterline. One set of islands was configured for a 0.5m water depth, while the other was for a 0.3m water depth. The islands were conical; for each set of two islands for the same water depth, the island was either fully conical (representing an emergent island) or truncated at the water line (representing a low-lying reef-like structure).

Each island was placed along a line centered in the wave tank. Behind the island was a 1:10 sloping metal beach, on which inundation levels were measured.  Each island was placed in three positions: one abutting the toe of the beach slope (referred to as "1D case"); one located one island diameter away from the toe of the slope ("2D case"); and then one placed two island diameters away from the beach toe ("3D case").

In these tests, two representations of tsunamis were generated in the Directional Wave Basin at the Hinsdale Laboratory.

One was a solitary wave, which is a classical representation of a propagating tsunami. It was desired to run solitary waves whose lengths were integer multiples of the island diameter at the water line; this allowed the scaling of the solitary wave lengths with the island geometry, as well as varying the wave height.

Another was a "full stroke" wave, in which the wavemaker traversed the maximum paddle displacement distance over a given time.  The resulting wave is considered to be a proxy for a tsunami front at landfall, with higher waves possible with shorter times associated with the full stroke.

In addition, one ADV was mounted in the lee of the island at all positions, as numerical model results have shown high velocities in this location. Furthermore, video cameras mounted on the bridge were used to measure the level of inundation of the beach caused by tsunami waves.

As the inundation levels were of primary interest, these were the focus of the initial preliminary analysis.

Figure 1 shows the level of inundation (measured as vertical distance from the mean water surface) for three different locations of the larger, fullcone island during a specific solitary wave condition. While the inundation levels appear to show some amplification for all island locations, they appear to be most pronounced for the case where the island was closest to the beach (the 1D case). However, the majority of cases — for both the solitary waves and full stroke waves — did not exhibit any wave breaking until the wave propagated past the island and reached the shoreline. One exception was for the case of the fastest full wavemaker stroke; in this case the wave broke prior to encountering the island. This result is shown in Figure 2. In this case, the maximum inundation occurs when the island is furthest away from the beach.

However, in all cases, the inundation is amplified, not reduced, on the beach in the lee of an offshore island.

In other words, the physical experiments performed by Kaihatu and his team confirm the numerical idealizations of the active learning tests. This research will help save lives by better targeting educational campaigns to at risk populations. For example, it will be determined if coastlines shadowed by offshore islands along the Pacific Coast of the U.S. are more vulnerable than earlier believed.

The results will help validate active learning as a mathematical procedure for uncertainty reduction at greatly reduced computational cost. The validation will help determine the parameters in the phenomena (island configuration/distance, wave type and height) which appear to have the greatest influence on inundation, and as such should help increase the certainty and optimization of these active learning algorithms.

Also, the team is developing a substantial laboratory data set that will be developed to help benchmark numerical computations for interacting breaking wave fronts, under conditions as yet unstudied. The data sets for the 2016 experiment are presently uploaded to DesignSafe; the 2017 experimental results will be uploaded soon.

An outreach campaign is planned to educate populations at risk and improve the awareness of emergency managers on this unusual amplification phenomenon.

The early numerical results from active learning are only applicable for non-breaking waves. While many existing numerical codes attempt to model mild long-wave breaking, as they sometimes do, it is unclear how well they perform when scattered long waves break and interact.  The present experiments suggest that the trends between high levels of inundation, and island distance from shore, during breaking wave cases are opposite of those for nonbreaking waves.

It is equally unclear if the isthmus between islands scatters the wave energy or focuses further in the mainland behind them, or under what geographical conditions either effect prevails. Experiments performed during the summer of 2017 at the same facility were designed to investigate this, and the results are presently being analyzed.